Did Philippine farmers vandalise a field of Golden Rice GMO?

The BBC and the New York Times report that the a field of Golden Rice GMO rice was vandalised by Philippine farmers:

A trial plot of genetically modified rice has been destroyed by local farmers in the Philippines.

"Golden Rice" has been developed by scientists to combat vitamin A deficiency, which affects millions of children in the developing world.

The crop was just weeks away from being submitted to the authorities for a safety evaluation.

But a group of around 400 protestors attacked the field trial in the Bicol region and uprooted all the GM plants.

However, this Slate article contradicts the above two articles, and cites an interview with the Golden Rice farm manager Raul Boncodin, who claims that the alleged Philippine farmers were actually city activists in disguise. The article also cites the local Philippine government report (which is a broken link, but is archived on Wayback Machine).

So who were these attackers? Did they look like farmers? "No," replied Boncodin. "Maybe two or three of them were farmers, but the rest of them were not real farmers. I could see that this was the first time they had stepped in mud or been to a farm. They were city boys, city girls. Two of them were even sporting dyed hair. ... Would you consider a farmer having dyed hair?"

There is additional evidence beyond the physical appearance of the activists. "Real farmers will not trash a living rice plant," said Boncodin, who is a native of the region where the vandalism took place. "They have this culture that it is unlucky to kill a living rice plant," even if plants are diseased and threaten to infect the rest of the crop. 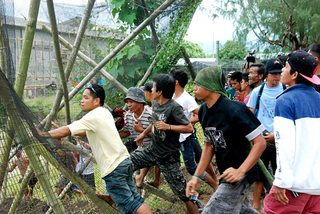 Were these vandals actual Philippine farmers?

No, those weren't mere farmers - they were militants made up of farmers.

According to the International Rice Research Institute:

The Philippines, through the Department of Agriculture, is among IRRI's top 10 donors and Filipino rice farmers some of the fastest adopters of new varieties and technologies.

One could ask the question, if local farmers vandalized rice research, why would they be regarded as the fastest adopters of said research?

Last August 8, the Golden Rice field trial in Pili, Camarines Sur was destroyed. According to a statement released by the Department of Agriculture-Regional Field Office 5 (DA-RFO 5), members of militant groups entered the DA compound and “…deliberately uprooted and trampled the rice plants in the experimental plots”. This happened despite an invitation to a dialogue at the DA by members and partners of the Golden Rice project.

A video can be seen here regarding the destruction.

Statements by the Biotechnology Information Center even identity who led the assault - Wilfredo Marbella.

Wilfredo Marbella is a leader among the Kilusand Magbubukid ng Pilipinas, a "peasant movement of the Philippines" and wholeheartedly declare on their own website as "a democratic and militant movement." Additionally, they encourage mob tactics and even promote their destructive affairs online via social media.

Not the answer you're looking for? Browse other questions tagged gmo philippines .

44
What risks exist with GMO, but not with selective breeding?
5
Does Australia label GMO foods?
11
Are GMO crops to blame for farmer suicides in India?
13
Do GMO companies forbid independent research on their seeds?
6
Do some GMO plants provide bigger yields and more efficient use of land?