Did Rachel Scott draw This Picture? and was the Picture dreamt about? [closed]

Today Cody Hodges came to our school and presented Rachel's Challenge, named after Rachel Scott, the first student killed in the Columbine High School shooting in 1999.

Hodges claims that, after Rachel's burial on TV, a man called the Scott family saying he had a recurring dream about Rachel crying and a plant being grown when the tears landed.

About a week later the Scott family found this picture as her last diary entry. 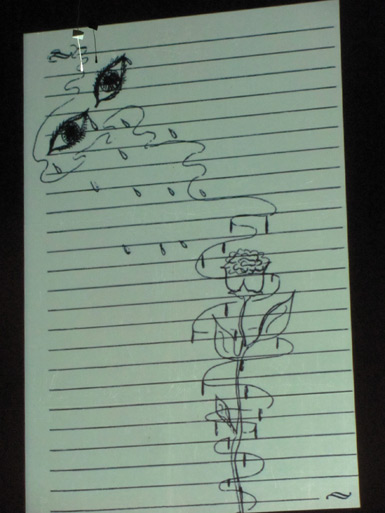 The picture shows a number of commonalities with the man's dreams, and the thirteen tears predict the number of casualties in the shooting. Hodges went on to say how Rachel often stated that she would die young.

Is there evidence for Rachel drawing this picture and/ for the man to have dreamt that?

82
Is the curtain behind Obama in this picture a “muslim prayer curtain”?
11
Is this picture of Trump making people swear to vote for him genuine?
1
Was there a picture of Freud above a urinal at Washington University?
32
Is this picture from an abortion clinic dumpster?
10
Is this a picture of Ted Cruz as a mime?
45
Did the Smithsonian publish this infographic about 'whiteness'?
2
Did Neem Karoli Baba read the thoughts of Ram Dass?