Did Donald Trump erect a flag on a man-made hill to skirt the law? 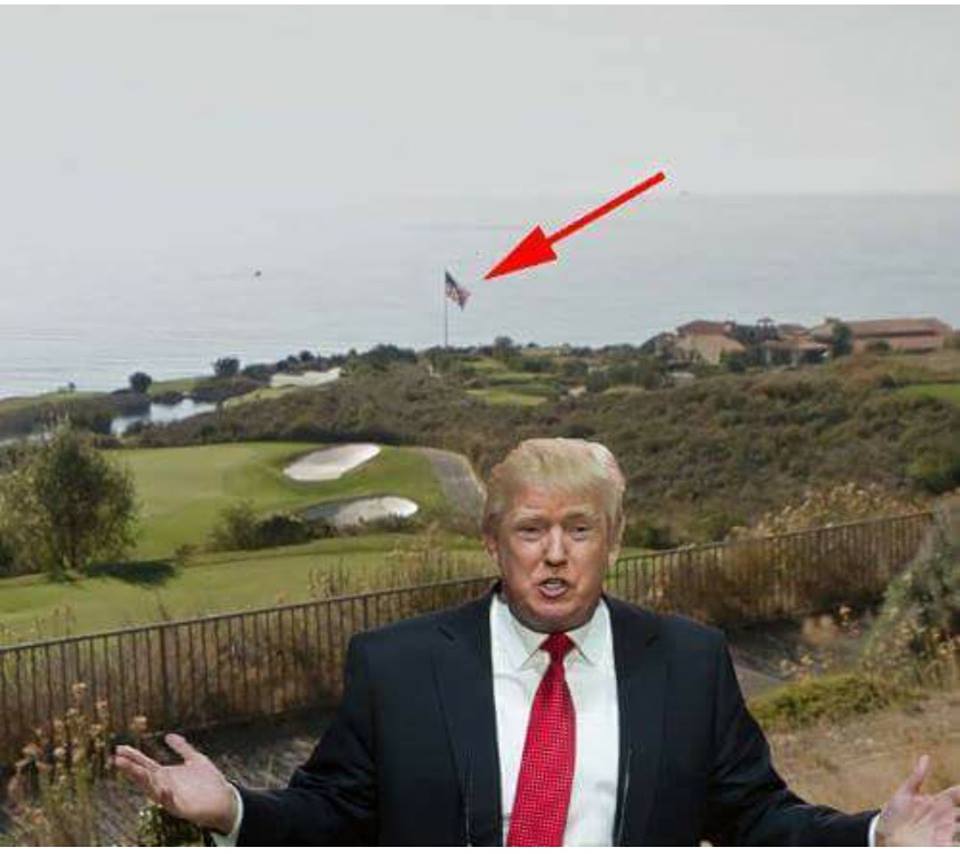 When Trump purchased and rebuilt Mar-A-Lago the Grand mansion and estate In Palm beach, Florida he got into a dispute with the city, who are well known for being strict on zoning regulations. Trump put up a 50 foot flag pole even though 30 foot is the maximum allowed. The city imposed a 1,000 dollar fine per day. While Trump and the city argued back and forth, finally when the fine had reached 120,000 dollars Trump proposed a solution. He would donate that amount to veterans organizations, would move the flag and pole to a different location in front of the mansion and would only use a 30 foot flag pole. The city agreed. So Trump brought in the company who does Golf course construction had them build a 20 foot high grassy hill and put a 30 foot flag pole on top of that.....

I'm curious to find a reliable version of the story, but am particularly interested in knowing if Trump actually skirted the law by mounting his flag pole on a man-made hill.

The claim that Donald Trump violated Palm Beach ordinances by putting up an outsized U.S. flag and pole, then donating the money he was fined to veterans’ organizations is mostly true per reference to Politico column by Frank Serabino.

In October 2006, without getting a permit or a variance, Trump put up an 80-foot flagpole on the front lawn of Mar-a-Lago, with a car dealership-sized American flag of 15 feet by 25 feet flying from it.

Trump knew from experience that Palm Beach was a stickler for adherence to its ordinances. He had once paid a $5,000 fine to the town for replacing a section of dead hedges with replacements that weren’t quite tall enough. But Trump had bigger changes in mind than merely out-flagging his neighbors. He was plainly inviting a lawsuit. The town council took the bait, citing the oversized pole and flag as violations of the town code, and fining Trump $250 a day for every day they remained on the estate.

Trump eventually dropped his lawsuit over the flag, and in exchange the town waived its fines. As terms of a court-ordered mediation, Trump would file for a permit and be allowed to keep an oversized pole on Mar-a-Lago that was 10-feet shorter than original pole and on a different spot on his lawn. The agreement also called for him to donate $100,000 to veterans’ charities.

A settlement was later reached between Trump and the Palm Beach town officials.

Donald Trump settled an ongoing legal dispute Saturday over a large flag flying at his Palm Beach club, Mar-A-Lago. The six-month standoff ended as town officials agreed to a settlement that will lower the banner 10 feet and move it away from the ocean, the Palm Beach Post reported. Trump sued the town after authorities began fining him $1,250 a day for flying the 15-by-25-foot flag atop an 80-foot flagpole. All fines will be dropped, and Trump will contribute $100,000 to various charities for veterans of the war in Iraq, the American flag or veterans' hospitals. Trump will also drop a $25-million lawsuit against the town, according to the settlement. Source: Flag flap between Trump, Palm Beach ends in settlement

Also Trump himself in a CNN transcript describes the flag as "And you know, they hang down onto the ground. This flag is beautifully proportioned. Done by the finest flag company in the United States. It was proportioned to the lot, to the building, which is almost 20 acres, which is very large, with the Atlantic Ocean right behind it. Regarding the donation he says, "But I sued them for $25 million, with the stipulation that any and all money, every penny of the money that I win, if I win the money, goes toward returning Iraqi soldiers. "

In addition to the airplane noise suits, he also sued the town of Palm Beach for fines he incurred when he installed an 80-foot flagpole on the club’s front lawn. “The flag is not going anywhere,” he told the New York Daily News in November 2006, shortly before filing the lawsuit in January 2007, when town fines had reached $120,000. “And that’s final.” Trump settled the case, agreeing to replace the flagpole with a shorter one and to move it. Source: Donald Trump will see you in court

Trump also had another flag pole litigation with the Rancho Palos Verdes Town officials because his 15-by-25-foot flag atop an 80-foot pole violated coastal zoning regulations(codes do not permit flagpoles taller than 12 to 16 feet) per reference to council documents here and here. Donald Trump then reached a non-court settlement with the local government and the city council adopted new guidelines regarding flag poles meeting provided parameters in the Coastal Zone exceeding 16-feet in height, up to a maximum height of 70-feet.

Also, there is no mention of Trump building a 20 foot high grassy hill and putting a 30 foot flag pole on top of that referring to Frank Serabino's Politico column and Bloomberg.

Politico: Trump would file for a permit and be allowed to keep an oversized pole on Mar-a-Lago that was 10-feet shorter than original pole and on a different spot on his lawn.

Bloomberg: Trump settled the case, agreeing to replace the flagpole with a shorter one and to move it.

TL;DR: The substantiated portions of the story was flying a 15-by-25-foot flag atop an 80-foot flagpole, $1250 per day fine and $100,000 to various charities for veterans of the war in Iraq, the American flag or veterans' hospitals. The unsubstantiated portion is Trump building a 20 foot grassy hill with the help of the company doing Golf course construction.

Not the answer you're looking for? Browse other questions tagged united-states law donald-trump .