In the CNN's Republican debate broadcasted in Sept 2015, Carly Fiorina said the following to Donald Trump:

There are a lot of us Americans who believe that we're going to have trouble someday paying back the interest on our debt. Because politicians have run up mountains of debt using other people's money. That is, in fact, precisely the way you ran your casinos. You ran up mountains of debt, as well as losses, using other people's money, and you were forced to file for bankruptcy not once, not twice — four times.

I never filed for bankruptcy.

Is there any evidence showing that Trump filed for bankruptcy?

Technically, no Donald Trump himself has not filed for personal bankruptcy, but companies he has ownership stake in have. So both statements are true, at least, in a legally defensible sense.

Well, you can hear Trump saying in the background, I never filed for bankruptcy. He is right when he says he never filed for personal bankruptcy. But Fiorina's also correct when she says Trump corporations turned to bankruptcy court on four different times to reorganize their debts. Trump has defended that as perfectly legal under the law and, of course, it is. Most of those bankruptcies were tied to Trump casinos in Atlantic City. The debts were restructured. Trump's ownership stake was whittled down. And like Fiorina, he says, look, context matters here. Just about every casino operator in Atlantic City has struggled, and those bankruptcies represent a small fraction of the many business deals he's done.

From "What Trump didn’t say about his four big business bankruptcies", Washington Post

The 69-year-old real estate tycoon has never filed for personal bankruptcy and has for years portrayed the Chapter 11 bankruptcies of his glittering hotels and casinos as calculated, even shrewd maneuvers, and facts of life in the high-stakes worlds of mega-development and commercial finance.

According to one estimate, Trump's bankruptcies have accrued around $4.7 billion worth of debt. I'm not sure if there is enough information to calculate exact total losses. In some cases he still owns a limited amount of stock in some of the entities.

From "By the Numbers: Donald Trump’s $4.7 Billion in Bankruptcies", Dividend Reference 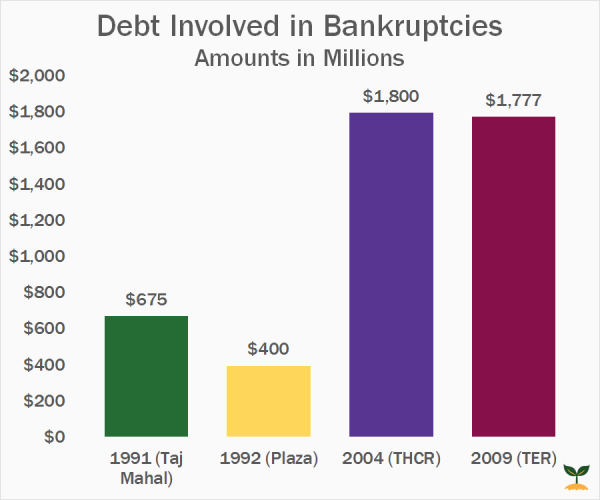 Trump himself has never filed for personal bankruptcy. But he has filed four business bankruptcies -- Trump Taj Mahal, 1991; Trump Castle Associates, 1992; Trump Hotel & Casino Resort, 2004; and Trump Entertainment Resorts, 2009 -- which Bankruptcy.com says makes Trump the top filer in recent decades. All of them were centered around casinos he used to own in Atlantic City. They were all Chapter 11 restructurings, which lets a company stay in business while shedding debt it owes to banks, employees and suppliers.

48
Is Donald Trump's ratio of bankruptcy to businesses consistent with the success rate of other entrepreneurs?