How does deja vu work?

If you've ever had that fleeting, mysterious sense that something new -- a city or person you’re seeing for the first time -- is somehow familiar, that you’ve been there or known them before, then you can count yourself among those who have experienced déjà vu. It’s typically a brief sensation, lasting no more than 10 to 30 seconds, but 96 percent of the population claims to have experienced at least one occurrence. source

Obviously, many people worldwide think the deja vu is real and claim to have experienced it, but has it ever been proven to exist under proper observing conditions?

If so, is there a scientific (physiological, neurological, psychological etc) explanation for the phenomenon? 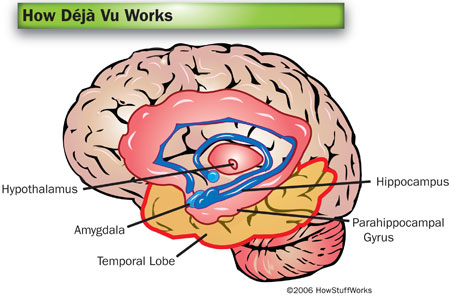 There are more than 40 theories as to what déjà vu is and what causes it, and they range from reincarnation to glitches in our memory processes.

Déjà vu is extremely difficult to study because it occurs briefly, unannounced, only in certain people, and has no witnesses or physical manifestations other than the person saying, "Hey, déjà vu!" Because of this, there is little firm research and no definitive explanations.

Firmly placing déjà vu within the study of memory, [researchers] hope to discover more about how memories are formed, stored and retrieved.

They have since determined that the medial temporal lobe is involved in our conscious memory.

... when we are distracted with something else, we subliminally take in what's around us but may not truly register it consciously. Then, when we are able to focus on what we are doing, those surroundings appear to already be familiar to us even when they shouldn't be.

Dutch psychiatrist Herman Sno proposed the idea that memories are like holograms, meaning that you can recreate the entire three-dimensional image from any fragment of the whole. The smaller the fragment, however, the fuzzier the ultimate picture.

Déjà vu ... happens when some detail in the environment we are currently in (a sight, sound, smell, et cetera) is similar to some remnant of a memory of our past and our brain recreates an entire scene from that fragment.

Robert Efron tested an idea at the Veterans Hospital in Boston in 1963 that stands as a valid theory today.

He proposed that a delayed neurological response causes déjà vu.

Because information enters the processing centers of the brain via more than one path, it is possible that occasionally that blending of information might not synchronize correctly.

... a new study suggests only a small chunk of [the hippocampus, called the dentate gyrus, is responsible for “episodic” memories—information that allows us to tell similar places and situations apart.

When Susumu Tonegawa and his team bred mice without a fully-functional dentate gyrus, the rodents struggled to tell the difference between two similar but different situations.

Not the answer you're looking for? Browse other questions tagged psychology biology neurology .

39
Does astrology work?
32
Does the brain use more energy during mental work?
25
Does black magic work?
18
Can people forget how to ride a bike?
17
Does “reverse psychology” work?
9
Does Matrix Rhythm Therapy work?
10
Does suggestive selling work in small retail?
16
Does auto-suggestion work?