A couple of years ago, at a party, I was invited to partake in some hookah smoking by some friends. Going by memory, I remember the hookah being a ornate metal contraption that somehow "filtered" the smoke produced by burning the product. Hookah at that time was pretty active at my college, to the point IIRC people would openly smoke it in the inner quad. 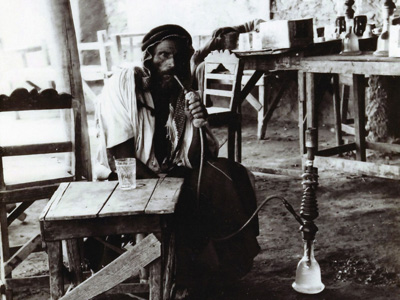 Anyway, to convince me to try it, which I did, someone told me that smoking hookah was much safer than smoking cigarettes; they said there were no carcinogens, and implored me try the "pure", "fruity" flavor of the smoke. I've heard similar arguments about hashish from those in the Middle East.

My questions are: Are these claims true? Is smoking hookah safer than smoking cigarettes? Is it safe at all? Does hookah contain nicotine/carcinogens?

I assume you mean a waterpipe a.k.a qalyan. It's an instrument for smoking, you don't necessarily put hashish in it. Tobacco (or flavored tobacco), marijuana, etc., can be (and are) used as well.

Now to the most important part of the question.

Hookah smoking is not safer than cigarette smoking.

The tobacco is no less toxic in a hookah pipe, and the water in the hookah does not filter out the toxic ingredients in the tobacco smoke. Hookah smokers may actually inhale more tobacco smoke than cigarette smokers do because of the large volume of smoke they inhale in one smoking session, which can last as long as 60 minutes.

9
Does smoking under three cigarettes a day prevent addiction?
2
Common additives to cigarettes
20
Does smoking cigarettes cause lung cancer?
11
Do plain packs for cigarettes reduce smoking?
3
"In some cities, it's more dangerous to breathe than to smoke cigarettes."
19
Is 1 hour of shisha as harmful as smoking 100 cigarettes?
21
Does smoking one joint give as much exposure to cancer-producing chemicals as smoking four to five cigarettes?