Is measuring the size of a nuclear cloud with your thumb an approximate indication of whether you're in the radiation zone?

Due to the upcoming release of Fallout 4, I've stumbled upon several claims about the stance of the iconic Vault Boy:

Basically, those stated that the Vault Boy was doing the following:

If you see a mushroom cloud from an atomic bomb, you're supposed to stick your arm out and hold your thumb over the cloud. If the cloud is bigger than your thumb, you're in the radiation zone and should evacuate.

I've traced back the quote to a Reddit post, but I haven't seen any other source mentioning this (potentially useful ?) survival tip, even when looking through official US government sources.

It's spawned several image macros that are circulating on social media and elsewhere: 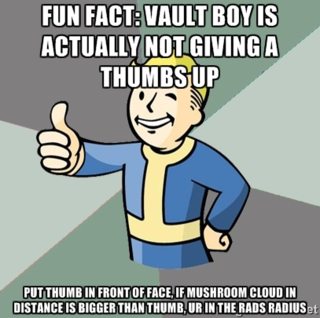 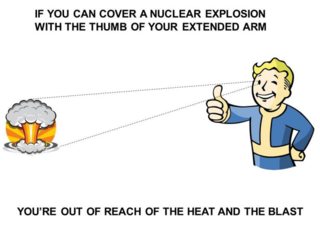 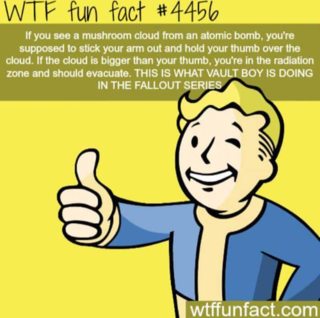 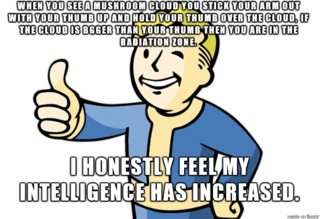 Could this tip be considered a realistic indicator in case of a nuclear attack? Should I proudly stand to measure the mushroom cloud or run for my life when the nuclear holocaust finally comes?

Bonus question:
Has any of the studios (Interplay or Bethesda) confirmed the meaning of the stance or is it just a fan theory?

Most damage comes from the explosive blast. The shock wave of air radiates outward, producing sudden changes in air pressure that can crush objects, and high winds that can knock objects down. In general, large buildings are destroyed by the change in air pressure, while people and objects such as trees and utility poles are destroyed by the wind.

Approximately 35 percent of the energy from a nuclear explosion is an intense burst of thermal radiation, i.e., heat. The effects are similar to the effect of a two-second flash from an enormous sunlamp. Since the thermal radiation travels at roughly the speed of light, the flash of light and heat precedes the blast wave by several seconds, just as lightning is seen before thunder is heard.

Fallout radiation is received from particles that are made radioactive by the effects of the explosion, and subsequently distributed at varying distances from the site of the blast. While any nuclear explosion in the atmosphere produces some fallout, the fallout is far greater if the burst is on the surface, or at least low enough for the firebalI to touch the ground.

What is the 'size' of the nuclear explosion that we are comparing to the size of a thumb? Well, the mushroom cloud can become very large, and continues spreading for an extended period of time, typically tens of minutes:

The cloud attains its maximum height after about 10 minutes and is then said to be "stabilized." It continues to grow laterally, however, to produce the characteristic mushroom shape. The cloud may continue to be visible for about an hour

There is obviously little benefit in using that as the comparison to your thumb.

A more plausible suggestion might be the initial fireball:

Within seven-tenths of one millisecond from the detonation, the fireball from a 1-megaton weapon is about 440 feet across, and this increases to a maximum value of about 5,700 feet in 10 seconds

5,700 feet is slightly more than a mile (5280 feet). Simple geometry suggests then that your thumb will completely cover this from a distance of around 30 miles.

Taking the damage effects in turn:

As a general guide, city areas are completely destroyed by overpressures of 5 psi, with heavy damage extending out at least to the 3 psi contour.

Humans are actually quite resistant to the direct effect of overpressure. Pressures of over 40 psi are required before lethal effects are noted.

The danger from overpressure comes from the collapse of buildings that are generally not as resistant. Urban areas contain many objects that can become airborne, and the destruction of buildings generates many more.

After about 40 seconds, when the Mach front from a 1-megaton nuclear weapon is 10 miles from ground zero, the overpressure will have decreased to roughly 1 psi.

So for blast effects you have time to take some kind of cover to mitigate the effects of collapsing buildings and debris, but the thumb rule doesn't really help because danger distance is about three times smaller than the 'thumb distance', and so you can see the fireball much larger than your thumb and still be at a safe distance.

This energy is emitted from the fireball in two pulses. The first is quite short, and carries only about 1 percent of the energy; the second pulse is more significant and is of longer duration (up to 20 seconds).

It has been estimated that burns caused some 50 percent of the deaths at Hiroshima and Nagasaki.

You potentially have a 20 second window of taking damage here, so possibly there is time to react and get in to some kind of cover to shield against the thermal radiation. But waiting to measure your thumb against the maximum size of the fireball that takes 10 seconds to develop would seem to be exposing yourself to the worst of the effects, and also directing your eyes at the fireball, exposing you to flash blindness.

So the better survival strategy would seem to be to get something solid between you and the explosion as soon as possible rather than waiting to measure the fireball against your thumb.

Initial nuclear radiation is defined as the radiation that arrives during the first minute after an explosion, and is mostly gamma radiation and neutron radiation.

Though people close to ground zero may receive lethal doses of radiation, they are concurrently being killed by the blast wave and thermal pulse. In typical nuclear weapons, only a relatively small proportion of deaths and injuries result from initial radiation.

Travelling at the speed of light, if this is going to be a problem for you then it has affected you before you could possibly react. Nothing the thumb can do to help you here.

Fallout is radioactive dust released in the explosion. This travels with the wind. As an example, here is the pattern of radioactive fallout after the Bravo test in the Bikini Atoll in 1954: 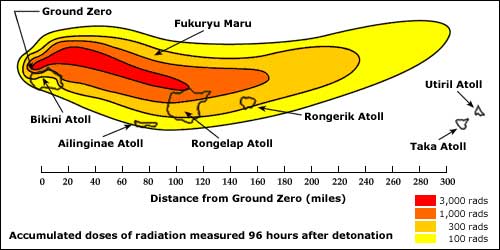 As you can see, 20 miles upwind you'd be completely safe, while the Rongerik Atoll 150 miles downwind was evacuated, and after the islanders returned, there were long term health consequences from the fallout

Description of the test and some subsequent events from http://www.rmiembassyus.org/Nuclear%20Issues.htm to illustrate the levels of health problems at locations up to 150 miles away)

February 28 - 6 p.m. On the eve of the Bravo test, weather reports indicate that atmospheric "conditions were getting less favorable." At midnight, just seven hours from the shot, the weather report reports there are "less favorable winds at 10,000 to 25,000-foot levels." Winds at 20,000 feet "were headed for Rongelap to the east."

March 1 - Bikini's weather outlook downgraded to "unfavorable" and Joint Task Force 7 directs several ships to move 20 miles to the south to remove them from the expected fallout zone. Despite weather reports showing that winds are blowing in the direction of inhabited islands, the March 1 Bravo hydrogen bomb test is detonated at Bikini. At 15 megatons, it is 1,000 times the strength of the Hiroshima bomb. Within hours a gritty, white ash is enveloping islanders on Rongelap and Ailinginae Atolls. A few hours later, American weathermen are exposed to the snowstorm of fallout on Rongerik, and still later the people of Utrik and other islands experience the fallout "mist". Those exposed experience nausea, vomiting and itching skin and eyes. March 3 Rongelap islanders are evacuated 48 hours later, and Utrik is evacuated 72 hours after Bravo. Both groups are taken to Kwajalein for observation. Skin burns on the heavily exposed people begin to develop, and later their hair falls out. The U.S. Atomic Energy Commission issues a statement to the press calling Bravo a "routine atomic test", and stating that some Americans and Marshallese were "unexpectedly exposed to some radioactivity. There were no burns. All were reported well."

Long term health effects were studied in Project 4.1 - the various reports of the project can be found online, such as Study of Response of Human Beings Accidentally Exposed to Significant Fallout Radiation (pdf download)

So the 'safe distance' varies by a factor of 10-20 (or more) depending on wind strength and direction, and I hope it doesn't count as original research to state the obvious fact that the rule of thumb suggests a single safe distance in all directions, and therefore is not a useful guideline.

The last factor to bear in mind is that the lethal and safe distances for all these effects vary in different ways with the size of the explosion. For most of the data above, a 1 megaton device is used. The bombs dropped on Hiroshima and Nagasaki were around 15 and 20 kilotons respectively (50 times smaller than a 1 megaton bomb). The largest US test was the castle test above, at 15 megatons. The largest Soviet test was the Tsar Bomba at around 50 megatons.

For weapons in the 1 to 200-kiloton region used against structures commonly found in the West, blast effects are likely to predominate; larger weapons will have the ability to start fires at distances far greater than they can inflict significant blast damage. Films of tests conducted in Nevada in the 1950's confirm that at the extreme distance at which wood-frame houses can be ignited by lower yield weapons, the buildings are blown apart seconds later by the blast wave, while structures which survive the blast do not ignite after the blast. Tests conducted in the Pacific using megaton-class weapons show the opposite effect.

Not the answer you're looking for? Browse other questions tagged nuclear-weapons videogames survival .