Does Lebanon ban the diary of Anne Frank?

According to factslides, a reddit post, Wikipedia, and the Wall Street Journal, the Diary of Anne Frank is banned in Lebanon.

According to a reddit comment this is "rubbish". Other news reports a single private school in Lebanon removing references to Anne Frank (Ynetnews, Huffington post), which implies it is not banned nationally, unless the situation has changed. It may also explain the origin of incorrect claims for a national ban.

Is the sale, possession, and/or import of the Diary of Anne Frank banned in Lebanon?

Edit: I realised it might be that there exists a ban de jure, but that it is unenforced and widely ignored.

To prevent confusion, I will highlight the definition of the verb ban from Google:

officially or legally prohibit (something).

The Lebanese American University's libraries (largest libraries in the Middle East with over 350,000 books) provide the book. Searching the catalog here with the phrase "The diary of Anne Frank" (or The Diary of a Young Girl) will return results, and the book is currently available for loan to currently enrolled students: 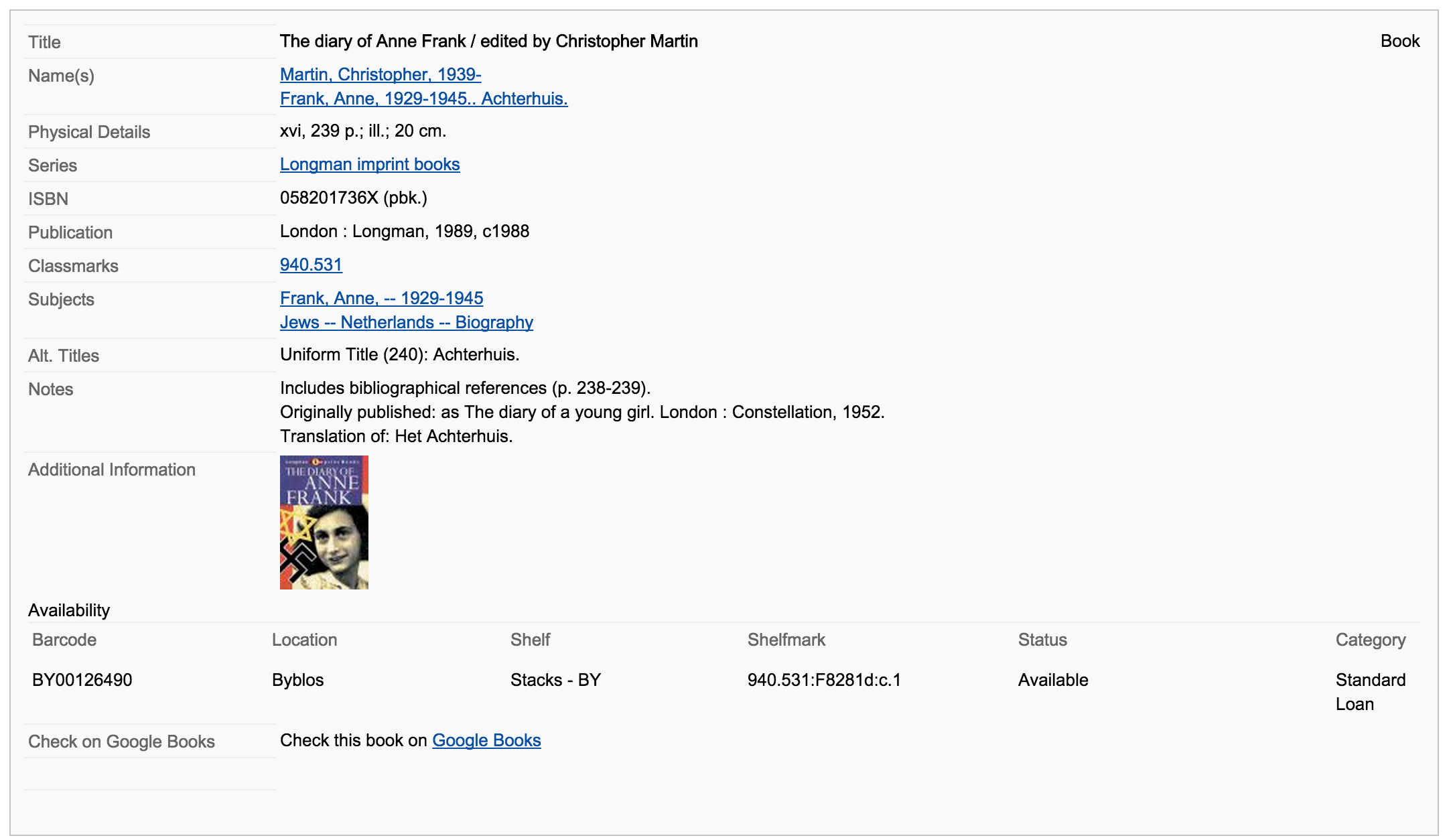 Moving on to Antoine Online, the e-commerce platform of the Lebanese-based Library Antoine, does provide the book: 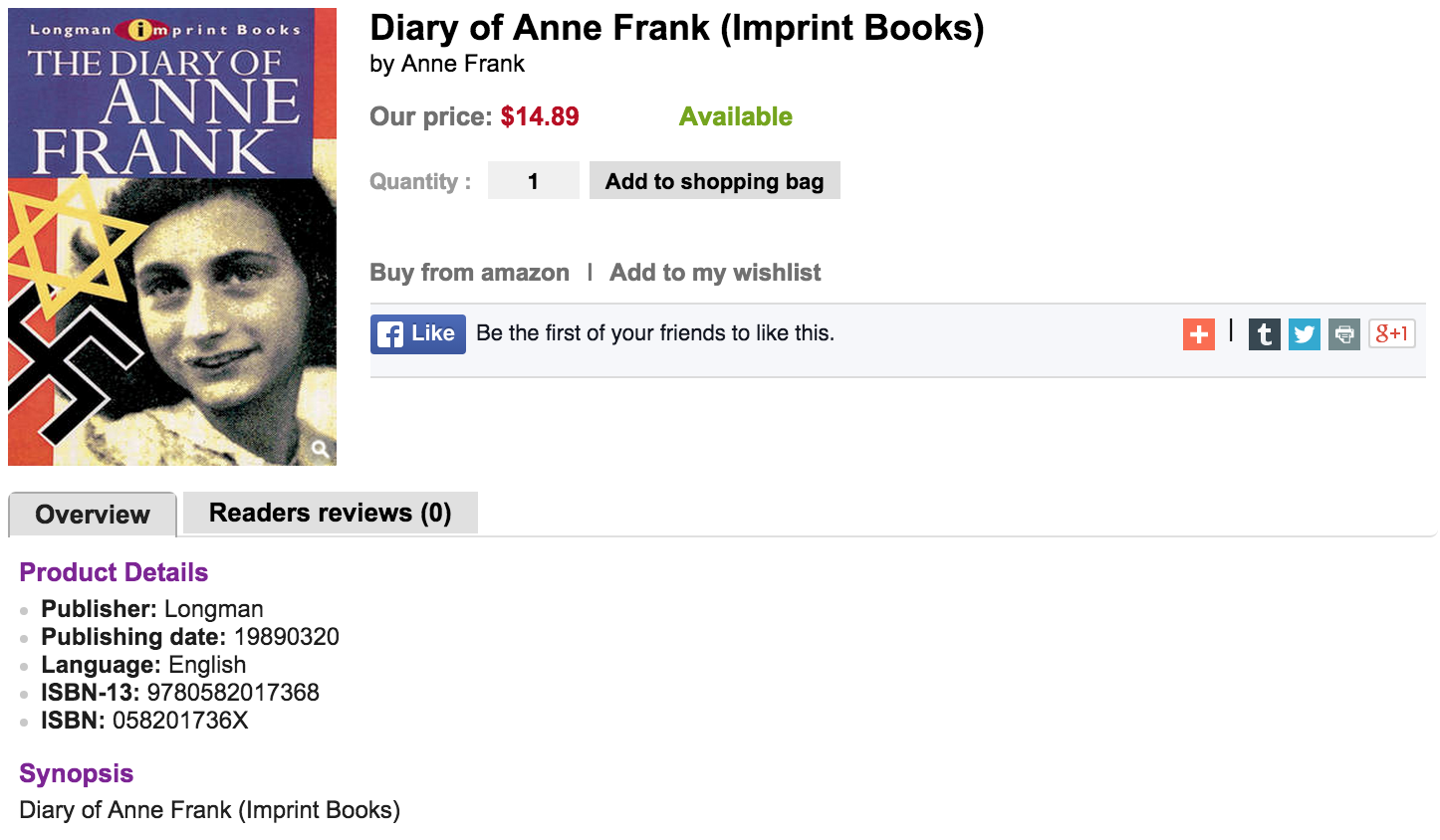 In Addition, Maliks, a bookstore founded in 1998 with many branches in Lebanon, provides the book 'offline' [buy it in store] to anyone at a great price. 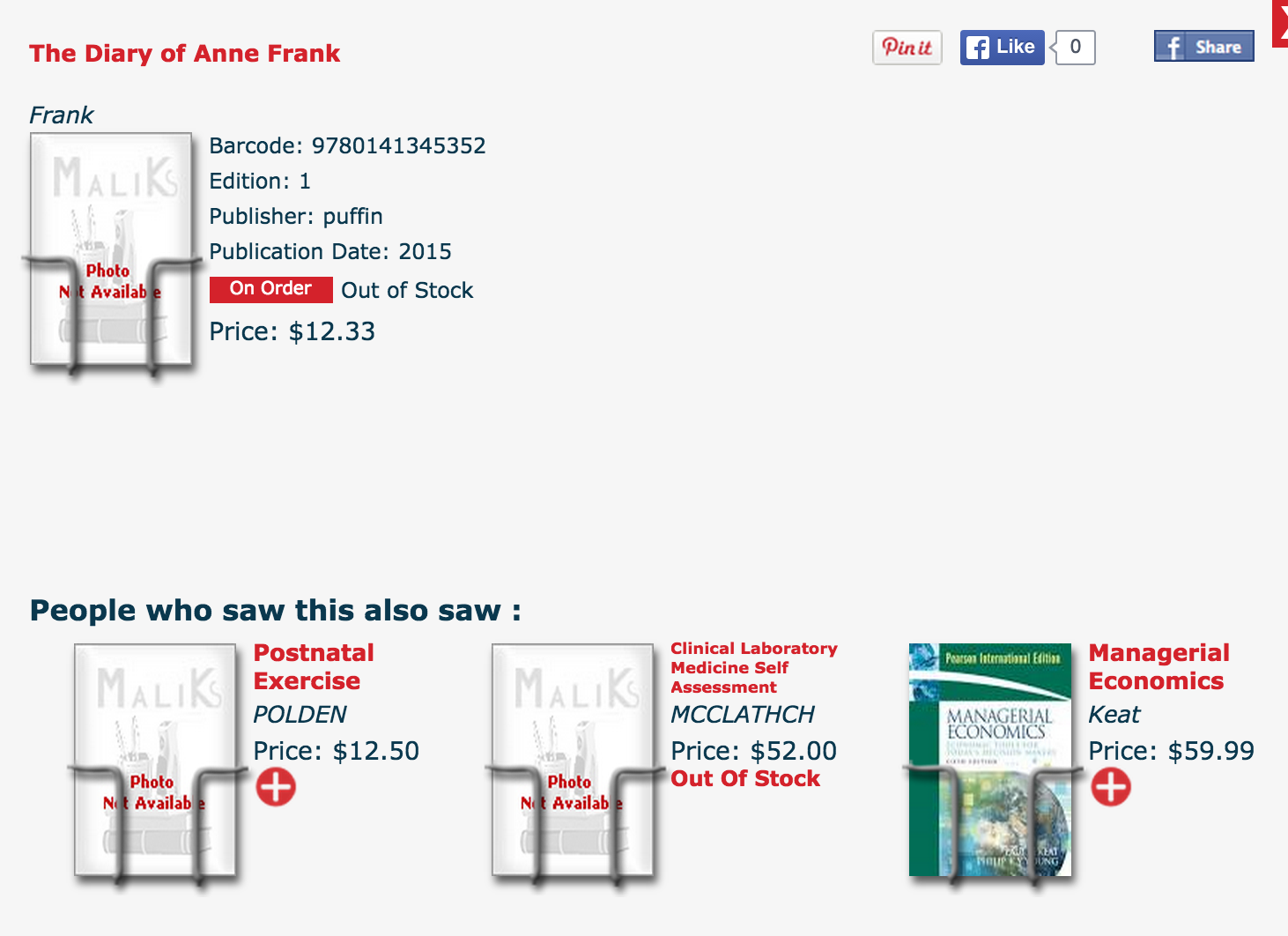 What is more surprising is the WSJ's article Why Jane Fonda Is Banned in Beirut which started with:

A professor at the American University here recently ordered copies of "The Diary of Anne Frank" for his classes, only to learn that the book is banned.

That is extremely odd because the American University of Beirut does provide the book offline for students:

The Wall Street Journal article is an example of bad journalism because it doesn't provide any source for its news and concludes that this book is banned in Lebanon just because of Dr. Marling's bad anecdotal experience.

Furthermore, instead of providing evidence of the banning of the book, the article uses the red-herring fallacy by talking about copyright laws in Lebanon to distract the audience.

Now, that this answer has demonstrated that the book available for purchase or loan in Lebanon. The next question would be, is there a ban that is widely ignored? In other words, is the book "officially or legally prohibited"?

So, ignoring Dr. Marling's bad anecdotal experience, online articles seem to be claiming that a ban occurred by Hezbollah.

Moving on, DailyStar's article is extremely misleading, its title is:

A rational person would understand the title as "Anne Frank diary got banned in Beirut schools".

Anne Frank’s diary has been censored out of a school textbook in Lebanon following a campaign by Hizbullah claiming the classic work promotes Zionism.

The most fit article of the event is one by the THE JEWISH CHRONICLE ONLINE titled:

A Beirut school has removed a textbook containing excerpts of The Diary of Anne Frankfrom its syllabus after Hizbollah claimed it promotes Zionism.

Moreover, for a ban to occur officially in Lebanon, you need the Directorate General of General Security to issue the ban and not just one political party like Hezbollah, quote:

Censorship controls over literary and artistic works and publications in Lebanon today fall under the jurisdiction of the Directorate General of General Security.

Sure, there is a possibility that Hezbollah banned this book, the Virtual Museum of Censorship reported, but Hezbollah has 12 seats out of 126 in the Lebanese Parliament. The terrorist-labelled political party Hezbollah funded by Iran is a "state within a state", the organization has its own territory, TV station and military. It can ban be the book in its territory, formerly known as al-Dahiya al-Janubiya, but not in the whole of Lebanon.

Conclusion: There doesn't seem to be any evidence online or offline suggesting that there is ban of "The Diary of Anne Frank" book in the whole of Lebanon, The Virtual Museum of Lebanon lists the book as banned by Hezbollah but the terrorist-labelled political party Hezbollah can urge or force its supporters and schools to stop using the book but they cannot ban the book in the country. The top academic institutions and top libraries will continue loaning and selling the book.

Not the answer you're looking for? Browse other questions tagged history law literature antisemitism .

16
Does the new Testament claim that Mary, mother of Jesus, was a virgin?
22
Did the Soviet Union ban microwave ovens in 1976?
9
Does the extent of illiteracy in children correlate with future criminality?
1
Does this 2015 draft of the Armenian constitution propose to allow killing people when "absolutely necessary"?
78
Did Donald Trump exclude Muslim countries in which he does business from the recent entry ban?
19
Did the Constitution of the Confederate States of America ban the slave trade?
94
Will the 2019 EU Directive on Copyright in the Digital Single Market ban memes?
16
Does the asteroid 16 Psyche contain this much gold?
5
Does "the captain's daughter" refer to a whip/cat o' nine tails?