According to this article on Vice giving birth, and raising a child for at least the first few years, makes the parent miserable/unhappy.

A horrifying study published last week in the journal Demography suggests that being a new parent makes you miserable.

My bias is this is strange as certainly all the anecdotal evidence seems to point in the opposite direction. My questions are 1) is this claim true 2) if it is true, what population does it apply to? For example the article states

The authors do point out that this only covers the strains of being a new parent, not the parent of an elementary school student, or a full-grown adult person, which might be a barrel of laughs for all anyone knows.

So elementary school starts at age 6 and that means children are most miserable to live with between 0-6?

I would expect their to be several factors including the state of the parents, such as health of child and income (even cultural things, such as preferential treatment over first born).

The study was done on German nationals.

The article directly links the papers abstract which in turn links the full paper. Both of which are always really nice.

What population does it apply to?

We use data from the German Socio-Economic Panel Study (SOEP), a nationally representative longitudinal study of private households run by the German Institute for Economic Research (DIW Berlin). Every year, nearly 11,000 households and more than 20,000 persons are interviewed. The data provide information on all household members, consisting of Germans living in the old (West) and new (East) German states, foreigners, and recent immigrants to Germany. 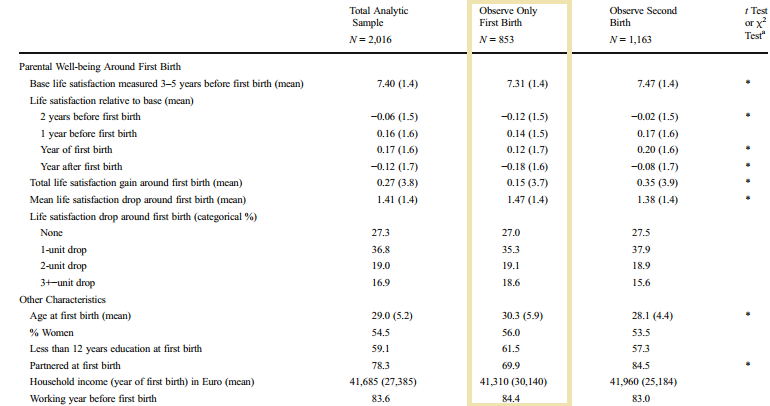 How is this measured?

Our key independent variable is parents’ subjective well-being, measured annually over the course of the transition to parenthood. Respondents were asked annually, “How satisfied are you with your life, all things considered?” Responses range from 0 (completely dissatisfied) to 10 (completely satisfied). This is a distal measure of overall positive well-being. Although this measure does not capture respondents’ overall experience of having a child, it is preferable to direct questions about childbearing because it is considered taboo for new parents to say negative things about a new child

I would expect there to be several factors including the state of the parents, such as health of child and income....

. Those who have a more difficult transition to parenthood are more likely to be women, have lower levels of household income, are less educated, and are less likely to be working.

Here's another news article about the study that's a bit more informative. Note though I'm not sure where they got the info on the comparison to other major life events. It's not in that study.

8
Are children raised in single parent households more prone to sexual abuse?
29
Is "co-sleeping" (infant sleeps in bed with parents) safe?
3
Is a new case of dementia diagnosed every 4 seconds?
7
Do children raised by mothers who choose to conceive as single parents suffer relative to children of traditional nuclear familes?
8
Are 30% of all putative fathers who take paternity tests not the biological father of their children?
3
Is the statistic "8% of People Achieve Their New Year's Resolutions" based on facts?
12
Are second children more likely to be troublemakers?