Does sleeping on your left side improve digestion?

Does sleeping on the left side improve digestion?

This article claims that it does, is there any truth to it?

Sleeping on the right side is likely to worsen digestion problems, whereas sleeping on the left side may improve digestive symptoms. 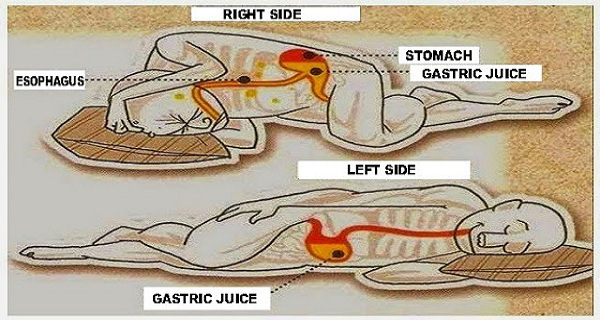 Sleeping positions on the right or left might have an influence on digestion if the digestive problems are related to gastroesophageal reflux per research mentioned below.

Several studies have shown that gastroesophageal reflux is increased in patients in the right lateral decubitus position along with the risk factors of exposure to tobacco, alcohol, chocolate, and high-fat meals influencing reflux.

The reason for this phenomenon is not completely clear, but it may be related to increased transient LES relaxations in the right position, or possibly that the gastroesophageal junction lies above the level of gastric acid in the left lateral position. Specifically, total reflux time, average acid clearance, and LES relaxations are significantly prolonged in patients lying on their right side compared with the left lateral decubitus position.

Not the answer you're looking for? Browse other questions tagged medical-science physiology sleep .