Does the picture below (found on Facebook) accurately describe laws regarding voter identification cards in Mexico? 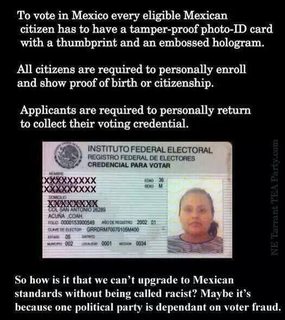 To vote in Mexico every eligible Mexican citizen has to have a tamper-proof photo-ID card with a thumbprint and an embossed hologram.

All citizens are required to personally enroll and show proof of birth or citizenship.

Applicants are required to personally return to collect their voting credential.

So how is it that we can't upgrade to Mexican standards without being called racist? Maybe it's because one political party is dependant [sic] on voter fraud.

Yes, these claims are true.

The department of the Mexican government responsible for the integrity of the electoral process is Instituto Nacional Electoral (INE) [National Electoral Institute]. My answer refers to their resources extensively.

Going through the claims:

The photo-voting card issued free of charge by the IFE to all citizens that have requested to be included in the electoral registry is an essential document to exercise the right to vote. In exceptional cases clearly foreseen by the law and for the purpose of voting within the national territory, a citizen who does not carry and show his/her photo-voting card on the day of the elections is not allowed to cast his/her vote.

Note: The second sentence, read literally, would actually refute the claim (and the first sentence), but it appears this is a mistranslation of the confusing triple negatives. I think the word "Except" is missing at the start of the third sentence.

That's a bold claim for me to make, so I looked for some other evidence to support it.

USA Today confirmed, in a 2012 story, with interviews with appropriate officials that the id IS strictly required:

Though some U.S. states allow people to vote without IDs, Mexico makes no exceptions for individuals lacking the proper documents. The Federal Electoral Institute also refused to extend the registration period or grant an amnesty for those applying late, leaving more than a million people ineligible to vote.

"It is a matter that has to do with a culture of respect for the law," Francisco Guerrero, one of the nine commissioners on the institute, told the newspaper Reforma.

The agency makes no apologies for the tough rules or requiring photo identifications, given Mexico's history of troubled elections. "We started from such a point of distrust, especially in the electoral system," institute commissioner María Marván said.

Also, this Spanish site about the 2015 Mexico Elections explains that voting card is required, and only people issued with them will appear on the electoral rolls. (I am not sure of the page's provenance though.)

I think it is reasonable to conclude that the troublesome sentence was mistranslated.

Examples of the different types of cards can be seen on this INE web-site.

Photos, thumb-prints and "holographic" embossing can be seen.

The site allows particular ids to be checked against a database.

Sixteen security features of the card are published to help people inspect the cards. Whether they are "tamper-proof" is a matter of opinion/definition.

This INE site shows the type of documents that are required for first time voters ("Primera vez"): Photo id, nationality documents and proof of address.

This INE document describes the process, including a step of receiving a voucher with a date on it. After than date, you must return to the same office, present the voucher and have your fingerprint verified to receive the card.

(My Spanish is poor, so I would appreciate some verification that I have this right.)

Not the answer you're looking for? Browse other questions tagged voting mexico .

14
Does this photo show large crowds of protestors in Mexico?
38
Is voter fraud practically non-existent in the United States?
30
Are there "1,071 Proven Cases of Voter Fraud"?
19
Is Mexico one of the "highest crime Nations in the world"?
10
Are some police in Mexico acting as hired killers?
7
Does most illegal fentanyl sold in the US come through Mexico?
1
Is a reasonable prediction that by the end of summer there would be ~45,000 deaths in Mexico?
32
Is slime mold eaten in Mexico as a dish called "feces of the moon"?