Have 1,822 people died in Fukushima as a result of the nuclear accident?

The news is showing photos of people protesting against the restarting of nuclear power plants in Japan. This photograph is making the rounds: 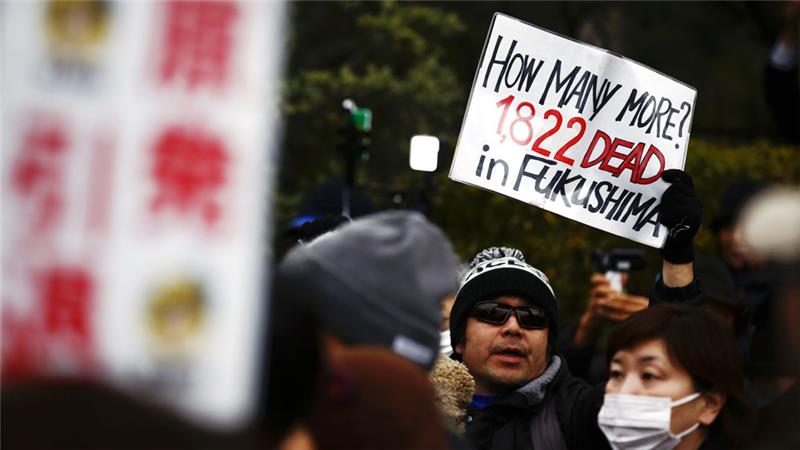 Have 1,822 people really died in Fukushima as a result of the nuclear accident? Where does this number come from?

I find no supporting information on the relevant Wikipedia page, other than suggesting the possibility that 14,000 Americans have died due to related radiation poisoning in the US. A previous Skeptics.SE question, though no longer be contemporary and which specifically addresses deaths from cancer, also lacks supporting evidence.

Other than cancer, I suppose one could die as a rescue or construction worker dealing with the situation, or from an accident fleeing the situation, or from the hydrogen explosion, or from lack of nutrition due to unavailability of non-affected food. I could think of tens of other ways someone might die "as a result of the accident" if inflating the number of casualties is a goal.

Per World Nuclear Organization, there have been no deaths or cases of radiation sickness from the nuclear accident at Fukushima, but over 100,000 people had to be evacuated from their homes to ensure this. It states "There have been no harmful effects from radiation on local people, nor any doses approaching harmful levels. Government nervousness delays their return. Official figures show that there have been well over 1000 deaths from maintaining the evacuation, in contrast to little risk from radiation if early return had been allowed." Other Fukushima Daiichi accident facts collated by a journalist are listed here and potential future risks of human exposure to radiation owing to the March 2011 Fukushima Daiichi Nuclear Power Plant accident are discussed here.

"Tepco has now examined all 3,700 workers; 107 workers have from 0.4 – 0.8% chance of a fatal cancer, and another 17 have higher exposures, with chances of fatal cancer as high as 5%.) Exposure levels for other workers and the public are much lower, but one can assume that the sheer volume of exposure will produce statistical cancers predicted by the model, but occurring at a much lower rate than year-to-year variations, with vanishingly small chances of any one cancer being caused by this event".

"A preliminary report from the World Health Organisation (WHO) in May 2012 estimated the radiation doses that residents of Japan outside the evacuated areas received in the year following the accident. The report's headline conclusion is that most people in Fukushima prefecture would have received a radiation dose of between 1 and 10 mSv during the first year after the accident. This compares with levels of about 2.4 mSv they would have received from unavoidable natural sources. In two places the doses were higher – between 10 and 50 mSv, still below any harmful level. Almost all were “below the internationally-agreed reference level for the public exposure due to radon in dwellings” (about 10 mSv/yr)."

"In May 2013, the UN Scientific Committee on the Effects of Atomic Radiation (UNSCEAR) reported, following a detailed study by 80 international experts. It concluded that "Radiation exposure following the nuclear accident at Fukushima Daiichi did not cause any immediate health effects. It is unlikely to be able to attribute any health effects in the future among the general public and the vast majority of workers." The only exception are the 146 emergency workers that received radiation doses of over 100 mSv during the crisis. They will be monitored closely for "potential late radiation-related health effects at an individual level." By contrast, the public was exposed to 10-50 times less radiation. Most Japanese people were exposed to additional radiation amounting to less than the typical natural background level of 2.1 mSv per year."

"UNSCEAR’s final report of radiation effects was released in April 2014. This concluded that the rates of cancer or hereditary diseases were unlikely to show any discernible rise in affected areas because the radiation doses people received were too low. People were promptly evacuated from the vicinity of the nuclear power plant, and later from a neighbouring area where radionuclides had accumulated. This action reduced their radiation exposure by a factor of ten, to levels that were "low or very low." Overall, people in Fukushima are expected on average to receive less than 10 mSv due to the accident over their whole lifetime, compared with the 170 mSv lifetime dose from natural background radiation that people in Japan typically receive. "The most important health effect is on mental and social well-being, related to the enormous impact of the earthquake, tsunami and nuclear accident, and the fear and stigma related to the perceived risk of exposure to radiation."

Per research in 2015 on health effects of radiation and other health problems in the aftermath of nuclear accidents, with an emphasis on Fukushima,

However, past experiences suggest that common issues were not necessarily physical health problems directly attributable to radiation exposure, but rather psychological and social effects. Additionally, evacuation and long-term displacement created severe health-care problems for the most vulnerable people, such as hospital inpatients and elderly people.

Per online news Japantimes, "Fukushima prefecture provided a further report early in 2014 which said that the ‘indirect’ deaths in the prefecture were greater than the number (1607) killed in the quake and tsunami. It put the figure at 1656 as determined by municipal panels that examine links between the disaster’s aftermath and death. The figure is greater than for Iwate and Miyagi prefectures, with 434 and 879 respectively, though they had much higher loss of life in the quake and tsunami – about 14,200. The disparity is attributed to the older age group involved among Fukushima’s evacuated quake/tsunami survivors, about 90% of indirect deaths being of people over 66. Causes of indirect deaths include physical and mental stress stemming from long stays at shelters, a lack of initial care as a result of hospitals being disabled by the disaster, and suicides. The high rate of these deaths continues three years later as the evacuation is maintained for about 135,000 people – apparently some 75,000 from the nuclear accident and 60,000 from the natural disaster itself. Evaluation of ‘indirect deaths’ is according to a model developed by Niigata prefecture after the 2004 earthquake there."

Not the answer you're looking for? Browse other questions tagged radiation nuclear-energy fukushima-daiichi .

14
Have people died of cancer from the Fukushima daiichi nuclear accident?