Did an Algerian man sue his new bride for not looking pretty without make-up?

There is a news-story that has been going around:

This Emirates 24/7 article is quoted as a source:

An Algerian groom took his bride to court just a day after their marriage, accusing her of not looking as pretty as before the wedding and of cheating him with much make-up.

The groom, who is seeking $20,000 damages, told court in the capital Algiers that he was shocked when he got up in the next morning and found that his wife looked so different, that he could not recognise her.

Newspapers in the North African Arab country said the groom swore in court that he even mistook his wife for a “thief who came to steal his apartment".

The man is unnamed. The date is unclear. The court isn't named. This has all the hallmarks of an urban legend.

In 30 May 2015, a website (publishing in French) called El Manchar, published an article called:

Translation: A newly married husband files a complaint against his wife for forgery

The small article says that a man was so shocked after seeing his wife without makeup for the first time that he decided to sue her for fraud and psychological suffering.

Apparently, the staff of Emirates 24/7 have seen the article posted by El Manchar, and decided to adopt it in English and make a piece of news; those are the indicators:

Translation: Terrified, the husband would have initially thought a burglar had entered breaking the marital home before realizing that the intruder was none other than his wife cleansed.

Now, as you look further into El Manchar, you will find this in the about section:

Translation: El-Manchar is a site consisting of completely false and absurd information. It was created for the sole purpose of exploring the field of absrud. Also, the articles published therein, does not refer to any actual single occurrence but just occurrences which could be possible. The motto of El Manchar is "with saws, we change the world"

Going through their twitter account, you will find out a tweet where they express pride and satisfaction for their viral but fake story that have circulated and made online headlines on Yahoo, DailyMail, Huffington Post, EliteDaily, Metro and many more... 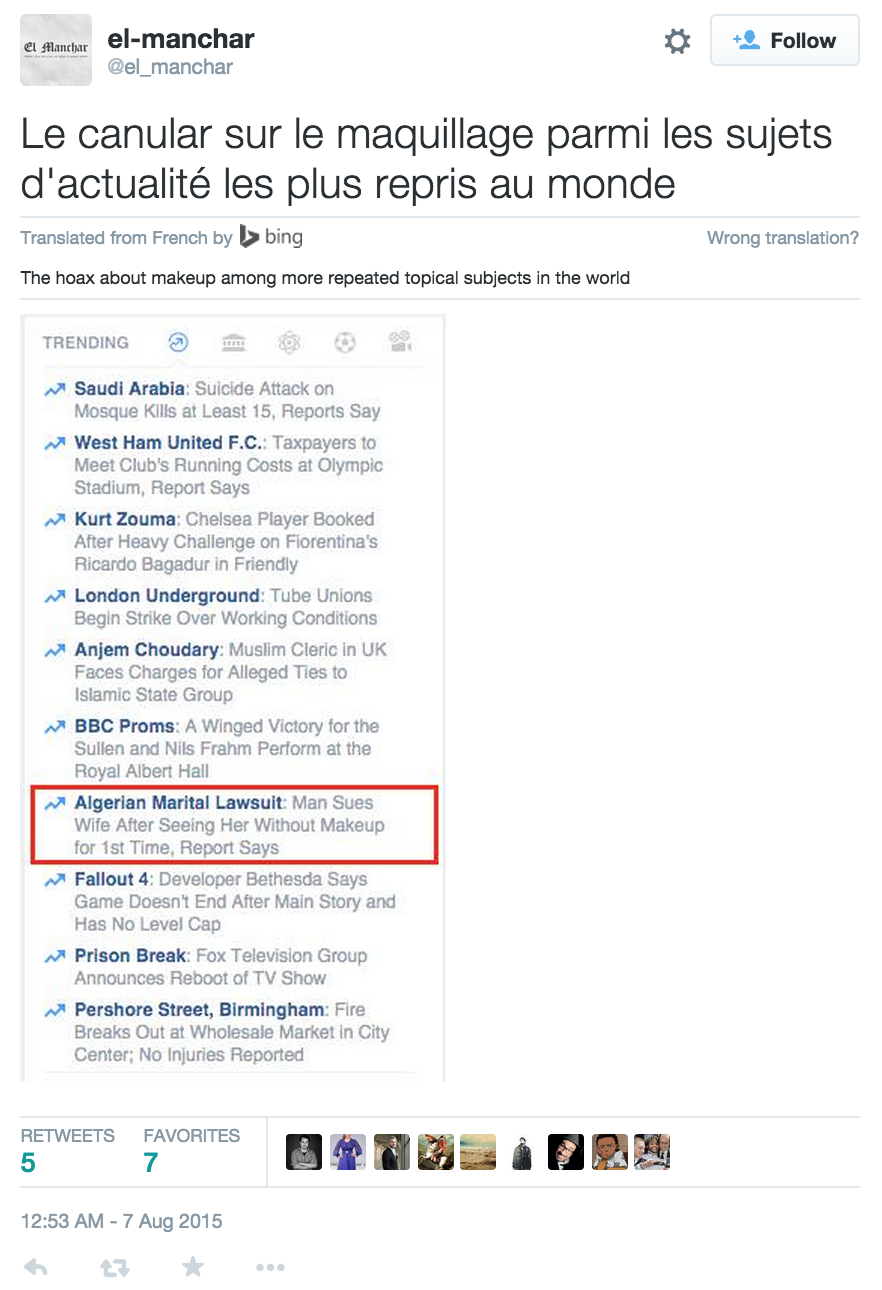 You will also find Facebook images where they mock news articles for falling for their fake news.

Not the answer you're looking for? Browse other questions tagged law court-case .

35
Did Apple sue New York city over the nickname Big Apple?
21
Did a man get sentenced to 18 months in prison for accidentally texting a sexually explicit message to his complete address book?
22
Did a man sue himself and win?
5
Did a man in France sue his employer because he was bored at work?
7
Did a non-US Hungarian citizen get extradited to the United States for not reporting an American customer of his bank?
6
Did "the" (or a) European Court declare that Covid-19 PCR tests are "not fit for purpose"?