Did Lenin say this about guns?

This quote can be found all over the internet, but I can't find any reliable sources for it.

Two examples for where it's used: 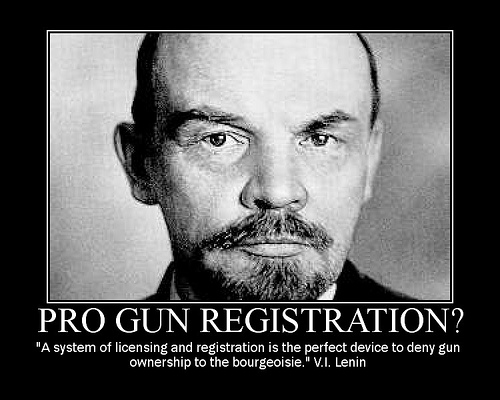 You can google it and will find a lot more usages of the quote, most of them from pro-gun activists. None of the mentions I found have any more information, such as the speech or publication it's from, or the year Lenin supposedly said this.

So my questions are:

According to the book They Never Said It : A Book of Fake Quotes, Misquotes, and Misleading Attributions

That Lenin, who died in 1924, had anything to say of use for opponents of firearms-registration in the United States in the late 20th century is highly improbable.

What Lenin did say about disarmament is:

The result of all bourgeois revolutions is: first arm the proletariat and then disarm it to prevent it from going any further.

Speech on the Cancellation of the Demonstration, Delivered at a Meeting of the Petrograd Committee of the R.S.D.L.P.(B.), June 11 (24), 1917

Our slogan must be: arming of the proletariat to defeat, expropriate and disarm the bourgeoisie. These are the only tactics possible for a revolutionary class, tactics that follow logically from, and are dictated by, the whole objective development of capitalist militarism. Only after the proletariat has disarmed the bourgeoisie will it be able, without betraying its world-historic mission, to consign all armaments to the scrap-heap. And the proletariat will undoubtedly do this, but only when this condition has been fulfilled, certainly not before.

Not the answer you're looking for? Browse other questions tagged history politics quotes guns .

24
Was George Washington the source of this quote equating government gun control with evil intentions?
17
Are guns in the USA used 80 times more often to protect life than to take it?
18
Did Gandhi support homeopathy?
39
Did Gandhi call vaccination a barbarous practice?
11
Did House Minority Leader Nancy Pelosi say that she hopes banning bump stocks is a slippery slope for more gun restrictions?
6
Did Paul Offit, MD, say that aluminum plays an important role in the development of a healthy fetus?
14
Did Lenin say he made a mistake, their actions caused oppression and massacres and what Russia needed was ten Francis of Assisi?
13
Did Margaret Mead say that a healed femur is the earliest sign of civilization?
6
Did Harry Anslinger say these things?
10
Did Josef Mengele say: "The more we do to you, the less you seem to believe we are doing it"?