Is this a video from the Tsar bomb?

You can find several videos showing the detonation of the Tsar bomb, a Soviet nuclear weapon (strongest ever tested). Most of them are bad quality and look very old. But also you can find this video:

This is very good quality, looks newer, and is from different angle than the other videos. Is this is a real video of the Tsar bomb, a video of another nuclear explosion, no real video at all (computer animation)?

One thing that seems to contradict the claim is the blue skies. In various articles about the event a clouded sky is mentioned, and in this video (YouTube, starting at around 1:40) there is footage apparently showing the plane over the target area and the release of the bomb. In those pictures, the sky is clearly covered in clouds, so both videos can't show the same event.

Without being able to prove what it actually is (it probably is CGI) there is a huge amount of photos and videos that show the tsar bomb deployment along with its explosion, that all agree with each other, but have distinct differences. For example let us take this montage of screenshots from one of the typical tsar bomb videos (from http://blog.nuclearsecrecy.com/2012/09/12/in-search-of-a-bigger-boom/): 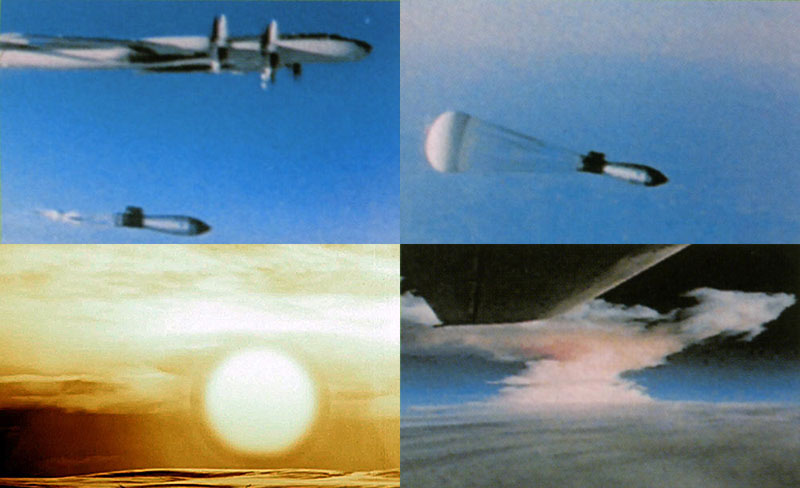 When we compare this to the explosion happening at https://www.youtube.com/watch?v=4R7pZOAWQrk&t=24 to that image and the explosin of the footage (possibly) from the plane that dropped the bomb at https://youtu.be/H9AMtUeyDP0?t=131 we can clearly note that

So they depict different events, and the chance of that video being the real one, while all others are fake is diminishing low.

Not the answer you're looking for? Browse other questions tagged video nuclear-weapons .

38
Did a nuclear blast devastate Port Chicago on July 17, 1944?
2
Is this video by Carl Sagan?
6
Is this video of someone dodging cars authentic?
0
Is the hand in this video of feeding hummingbirds an actual human hand?
6
Was the tsar bomb ten times more powerful than all of the explosives used in WWII combined?