Does Diet Coke “attack your teeth, switch on fat storage mode, cause addiction, and deplete nutrients”?

We recently had this question posted to Skeptics, Is this description of the processes which take place in the body for an hour after drinking Coca Cola accurate? now the author of the picture seen in this previous post has again released another picture this time supposedly explaining what happens within an hour of drinking a Diet Coke.

Are these claims real? 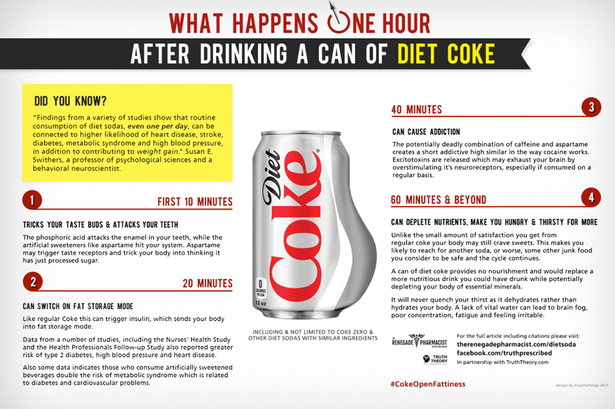 "Findings from a variety of studies show that routine consumption of diet sodas, even one per day, can be connected to higher likelihood of heart disease, stroke, diabetes, metabolic syndrome and high blood pressure, in addition to contributing to weight gain". Susan E. Swithers, a professor of psychological sciences and a behavioral neuroscientist.

First 10 Minutes – Tricks Your Taste Buds And Attacks Your Teeth

The phosphoric acid attacks the enamel in your teeth, while the artificial sweeteners like aspartame hit your system. Aspartame may trigger taste receptors and trick your body into thinking it has just processed sugar.

Like regular Coke this can trigger insulin, which sends your body into fat storage mode.

Data from a number of studies, including the Nurses’ Health Study and the Health Professionals Follow-up Study also reported greater risk of type 2 diabetes, high blood pressure, heart disease and metabolic syndrome, which is related to diabetes and cardiovascular problems, for consumers of artificially sweetened beverages.

Also some data indicates that those who consumed artificially sweetened beverages had double the risk of metabolic syndrome compared to non-consumers.

40 Minutes – Can Cause Addiction

The potentially deadly combination of caffeine and aspartame creates a short addictive high similar in the way cocaine works. Excitotoxins are released which may exhaust your brain by overstimulating it’s neuroreceptors, especially if consumed on a regular basis.

Unlike the small amount of satisfaction you get from regular coke your body may still crave sweets. This makes you likely to reach for another soda, or worse, some other junk food you consider to be safe and the cycle continues. A can of diet coke provides no nourishment and would replace a more nutritious drink you could have drunk while potentially depleting your body of essential minerals

It will never quench your thirst as it dehydrates rather than hydrates your body. A lack of vital water can lead to brain fog, poor concentration, fatigue and feeling irritable.

34
Is diet soda less healthy than regular soda?
23
Is this description of the processes which take place in the body for an hour after drinking Coca Cola accurate?
13
Does (diet) soda cause tooth decay?
11
Does drinking coffee or tea dehydrate you?
4
Is aspartame dangerous?

25
Is carbonated water unhealthy?
13
Does (diet) soda cause tooth decay?
4
Can diet drinks cause multiple sclerosis-like symptoms?
34
Is diet soda less healthy than regular soda?
8
Does drinking any type of soda increase the risk of Type 2 Diabetes?
9
Anti-inflammatory property of food
23
Is this description of the processes which take place in the body for an hour after drinking Coca Cola accurate?
2
Is Aspartame being added to regular Coke?
3
Do people who swap sugary sodas for diet sodas lose weight?
0
When eating carbs, do sugary drinks reduce calorie consumption compared to diet drinks?