Did Planned Parenthood fake being hacked?

Did Planned Parenthood fake being hacked?

Their site is so hacked right now that someone has been rearranging CSS fonts and alignment. 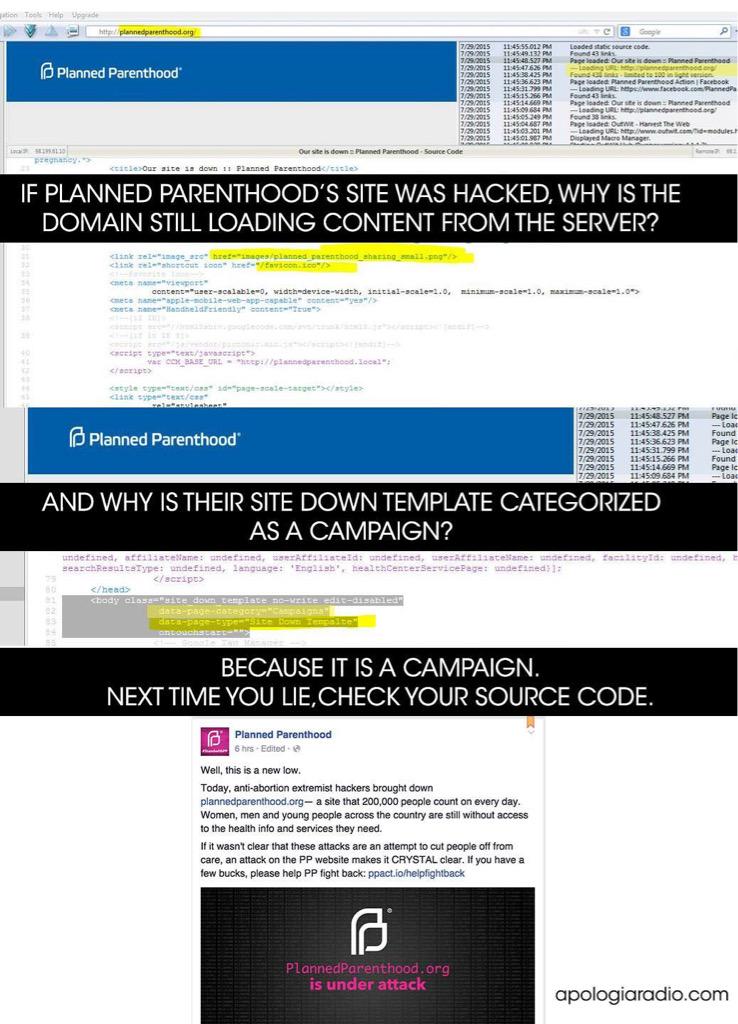 And why is their site down template categorized as a campaign?

Because it is a campaign. Next time you lie, check your source code.

And Planned Parenthood “Hacking” Sure Looks Like An Orchestrated PR Stunt says that the Planned Parenthood Action Fund site http://ppaction.org redirects to a page saying the site has been hacked, but the domain houses a perfectly functional URL.

This answer attempts to respond to the following claim (from the images in the question):

This claim is based on:

Summary - why this basis is not sufficient

Briefly said (see discussion below the answer), the claim that the hack was fake comes from the servers PP claims are hacked. If the servers are indeed hacked, the attacker has the same control over the servers that PP would normally have, and is therefore able to falsify the basis of the claim (at least, points 2 through 4). Without information from a source independent of these servers, it cannot be determined whether the attack occurred or not.

"Hacked" refers to the situation where someone unauthorized has access to the server. This means that integrity was compromised (see this section and its reference on wikipedia, or a basic computer security course for more details). This means that the attacker can make modifications to the system as if she were the administrator of the website. What specific changes are possible depends on the details of the case, but in general this means it is not possible to distinguish changes made by an attacker from changes made by the administrators. Thus, strictly speaking, we can't make a judgement about whether a hack is "real"; the attacker/hacker can always make it look as if the attack was fake, unless there is an additional source of information independent of the potentially affected website. As the website in question discusses a sensitive issue for some, it is at least plausible that this occurred, and it similar to website defacement, a technique often used to discredit websites by teenagers in the past, and currently by activists and politically motivated persons.

Not the answer you're looking for? Browse other questions tagged united-states politics hacking .

14
Has anyone ever hacked into a traffic control system to change the stoplights?
26
Can a computer be hacked to use a connected speaker as a microphone?
14
Could the Nokia 1100 be hacked to sniff SMS messages intended for third parties?
25
Does Planned Parenthood sell the organs of late-term fetuses?
14
Can aircraft be hacked and "commandeered remotely"?
15
Did Hillary Clinton's Campaign Fake a Rally in Greensboro, North Carolina?
13
Did President Trump sign an executive order defunding Planned Parenthood (International)?
25
Does Planned Parenthood impose abortion quotas on its clinics and provide incentives to its workers to meet those quotas?