Do geniuses die younger? If yes, why? [closed]

Why do geniuses have shorter life spans? Perhaps it is because the brain is overworked and obsessive, which causes the body to be neglected and unhealthy. Or is it just a myth that geniuses die young?

Nine cohort studies met the inclusion criteria. Overall, study quality was moderate. All reports showed an inverse IQ-mortality relation; i.e., higher IQ scores were associated with decreased mortality risk. The nature of this relation (i.e., dose-response or threshold) and whether it differs by sex was unclear. The IQ-mortality association did not appear to be explained by reverse causality or selection bias. Confounding by other early-life factors also did not seem to explain the association, although some studies were not well characterized in this regard. Adult socioeconomic position appeared to mediate the IQ-mortality association in some studies, but this was not a universal finding.

In all studies, higher IQ in the first two decades of life was related to lower rates of total mortality in middle to late adulthood. Some plausible mechanistic pathways exist, but further examination is required. The precise nature of the IQ-mortality relation (particularly in ethnic minorities and women) and the link between IQ and disease-specific outcomes also warrants further research.

There's even a strong correlation between IQ and chances of dying in a motor accident.

"THE g FACTOR The Science of Mental Ability" 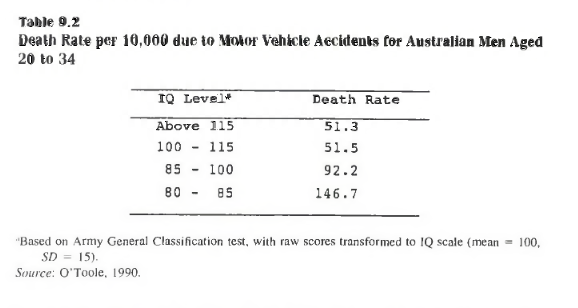 Not the answer you're looking for? Browse other questions tagged life-expectancy .

26
Was the world life expectancy only 30 years at 1900?
9
Are left-handed people more likely to die younger than right-handed people?
3
Does Korean ginseng develop brain efficiency and prolong life?
13
Is this graph of life expectancy pre and post Chernobyl accurate?
10
Is a short-term fast beneficial for maintaining good health and extending life expectancy?
22
Do married people live longer than single people?
19
Has anybody overdosed on marijuana and died?
7
Do people with mental illnesses die equal to other health issues?
29
Did people in ancient times, who survived childhood and were not killed in wars, have roughly the same chance to reach old age as contemporary people?