Multiple sources (for example, here) state that Ukranian Parliamentarians routinely have physical fights on the assembly floor. The videos look a bit like stage fighting to me, however. Are these real fights, or faked? If they're theater, are these real government officials, or actors?

They're real politicians. This is easy enough to prove- the third video in that link has Oleh Lyashko taking part. If you do a Google Image search, you can see his face and you get a clear look in the video (as shown below), so it definitely is him. 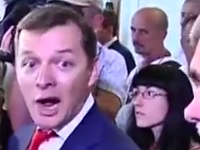 It seems a bit silly to suggest it's theatre, though. Why would politicians engage in anything other than politics, especially when it seems to be quite a cut-throat enterprise in Ukraine? I'd suggest that they do it because it's a part of their culture.

In fact, BBC News have an article on this very topic.

If it helps, I can give more examples:

"Deputies from opposition and pro-government parties blocked the first session of Ukraine's parliament on Wednesday after numerous fights erupted in the parliament chamber. "

You get the idea. Yes, they do have regular fist fights, and you can see lots of videos online to attest to that.

Addendum: Compro01's comment link is good enough to be worth inclusion. This is actually covered in Wikipedia- not only that, but many other nations have their own incidents.

19
Does Hunter Biden work for a Ukrainian oil company?
23
Do these photos show Ukrainian children being trained to fight the Russian army?
4
Did a Ukrainian woman tell a Russian solider in Kherson Oblast to put seeds in his pockets so flowers would grow when he dies in Ukraine?
57
Does Ukraine have biological weapons facilities?
0
Did the Ukrainian Ambassador for Human Rights get added to the list of enemies of Ukraine?