Is this description of the processes which take place in the body for an hour after drinking Coca Cola accurate?

An infographic about what happens to your body in the hour after drinking a can of Coca Cola has gone viral, but I haven't found the sources from which this information was gathered. 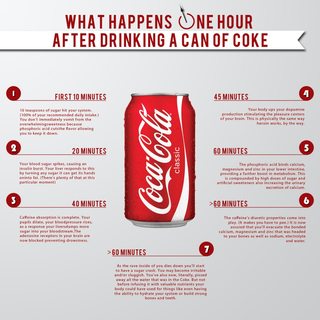 Here's what the article claims:

Lets run down the list and see what we get.

4
Does Diet Coke “attack your teeth, switch on fat storage mode, cause addiction, and deplete nutrients”?

35
Are we eating too many carbs? And do we need to switch to the primal/paleo diet?
22
Is eating a banana on an empty stomach bad for you?
11
Do supplements with folic acid cause cancer? Should they be avoided?
8
Are bodily deficiencies "mapped" to facial acne?
4
Does Diet Coke “attack your teeth, switch on fat storage mode, cause addiction, and deplete nutrients”?
7
What are the effects of a Big Mac on our bodies?
5
Does consuming foods rich in phytic acid prevent mineral absorption?
7
Does drinking coffee interfere with magnesium absorption?