Has a “chariot army” been found at the bottom of the Red Sea?

It's apparently quite a popular story to "disprove doubting Atheists" regarding the miraculous crossing of the Red Sea by the Israelites during the Exodus of the Hebrew bible that in the late 1970s, archaeological evidence was found at the bottom of the Red Sea of a "chariot army."

I first saw it mentioned in this documentary trailer, then googled for more specific instances of the claim, and found this one, and a few others: 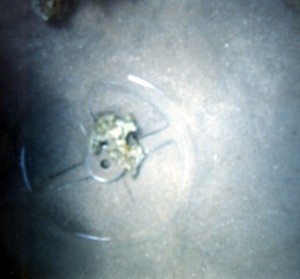 [C]arefully following the Biblical and historical records of the Exodus brings you to Nuweiba, a large beach in the Gulf of Aqaba, as Ron Wyatt discovered in 1978.

Repeated dives in depths ranging from 60 to 200 feet deep (18m to 60m), over a stretch of almost 2.5 km, has shown that the chariot parts are scattered across the sea bed. Artifacts found include wheels, chariot bodies as well as human and horse bones. Divers have located wreckage on the Saudi coastline opposite Nuweiba as well. 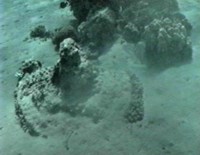 The prose style seems quite typical of pseudo-scientific pro-"Christian" apologetic sites, so I'm naturally quite skeptical. What was actually found at these sites? Is there any (compelling, accepted) evidence that the artifacts are Egyptian in origin, and/or date to the supposed time of the Hebrew Exodus?

Ron Wyatt (1933-1999) was a nurse-anesthetist in a hospital in Madison, Tennessee. His claim of finding 'Wheels from Egyptian Chariots involved in the pursuit of the Israelites from Egypt' has been debunked thoroughly by professional archaeologists and respected biblical scholars. Most professional archaeologists have found so many discrepancies in Wyatt's claims that they do not appear to take him seriously at all.

Several disputes are made against the claim of chariot army at the bottom of the Red sea by Wyatt per 'Holy Relics or Revelation – Recent Astounding Archaeological Claims Evaluated by Standish, Russell R. and Colin D. Standish, 1999'. This book by the Standish Brothers meticulously examines in detail all of Wyatt's claims to serve as a benchmark upon which Ron Wyatt's "discoveries" can be more carefully evaluated.

There is no undersea footage of the “gilded wheel” in the film but merely a digital “reconstruction” of a photograph taken by Wyatt in the 1970s. Neither does Wyatt's original photo provide clear evidence as to whether the small piece of coral seen on the wheel simply was placed there or not and no independent peer-reviewed examination by archaeologists and other specialists (to see if they were merely coral formations) was ever conducted and published for the claim of chariot army found at the bottom of the Red sea. "But aside from that, there are the obvious logic problems: If it was a chariot wheel, how would one know it was Egyptian? If Egyptian, how would one know it was related to the Exodus event? And if it was from that event, didn’t anyone notice the incongruity of the sea floor not being littered with these wheels?"

Further detailed claims of Wyatt are critically examined here, here and here and his profile can be found here.

Mr. Ron Wyatt is neither an archaeologist nor has he ever carried out a legally licensed excavation in Israel or Jerusalem. In order to excavate one must have at least a BA in archaeology which he does not possess despite his claims to the contrary. We are aware of his claims which border on the absurd as they have no scientific basis whatsoever nor have they ever been published in a professional journal. They fall into the category of trash which one finds in tabloids such as the National Enquirer, Sun, etc. It’s amazing that anyone would believe them…

Not the answer you're looking for? Browse other questions tagged bible religious-texts archaeology .

21
Has Noah's ark been discovered in Turkey?
24
Has the Quran (the recitation) been preserved since Muhammad?
18
Were technologically advanced artifacts found at the Durupinar “ark” site?
14
Have there been documented cases of “blood pumping from the trunks of trees”?
22
Has anyone ever memorized the entire bible?
18
Have edible jars of honey been found in thousand-year-old Egyptian tombs?
39
Are there textual deviations between the Dead Sea Scrolls and the Old Testament?
5
Did Winston Churchill say the King James Bible had been translated into more than 760 languages?