Did the then Commissioner of the FDA resign in 1983 and get hired on by Searle 3 months later?

After reading through this Survey Of Aspartame Studies, I stumbled onto this:

In 1980, the FDA appointed a Board of Public Inquiry to address the question of aspartame's safety. The Board concluded that some of Searle's test results were "bizarre" and recommended additional long-term testing prior to approval. Commissioner Arthur Hull Hayes overruled the Board and granted approval for aspartame's use in dry foods in 1981 and in beverages in 1983. Within 3 months of the 1983 approval, Hayes resigned from the FDA and accepted a position as a paid consultant to Searle's public relations firm.

"Hired on by Searle" is not exactly true, but "accepted a position as a paid consultant to Searle's public relations firm" is true. There isn't direct evidence showing that he did any work there on behalf of Searle, though.

According to a 1986 review done by the Government Accounting Office concerning the aspartame approval process, here is a short resume for Dr. Hayes during the time in question (pg 13):

You can see he left the FDA in September 1983 and was hired as a consultant for Burson-Marsteller in November of the same year. Searle was, at the time, a client of Burson-Marsteller, a public relations firm. B-M has a number of other clients, and is not a subsidiary of Searle.

Hayes and Burson-Masteller both deny that Hayes did any consultation related to Searle specifically (see pg 10 of GAO report), and provided documentation as evidence: 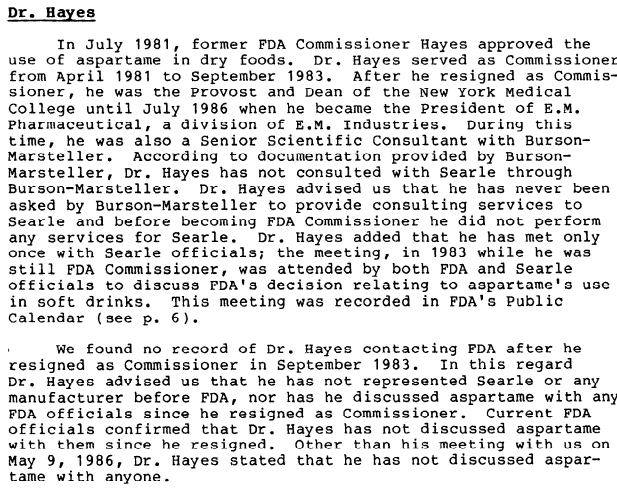 In July 1981, former FDA Commissioner Hayes approved the use of aspartame in dry foods. Dr. Hayes served as Commissioner from April 1981 to September 1983. After he resigned as Commissioner, he was the Provost and Dean of the New York Medical College until July 1986 when he became the President of S.A. Pharmaceutical, a division of E.M. Industries. During this time, he was also a Senior Scientific Consultant with Burson-Marsteller. According to documentation provided by Burson-Marsteller, Dr. Hayes has not consulted with Searle through Burton-Marsteller. Dr. Hayes advised us that he has never been asked by Burton-Marsteller to provide consulting services to Searle and before becoming FDA Commissioner be did not perform any services for Searle. Dr. Hayes added that he has met only once with Searle officials; the meeting, in 1983 while he was still FDA Commissioner, was attended by both FDA and Searle officials to discuss FDA's decision relating to aspartame's use in soft drinks. This meeting was recorded in FDA'S Public Calendar (see p. 6).

Now, obviously they would have motive to cover up any dealings he did have with Searle, but the GAO seems to have accepted this at face value, as no contradictory evidence has been brought forth.

Not the answer you're looking for? Browse other questions tagged politics fda .

24
Does Burzynski have a miracle cancer cure being suppressed by the FDA?
16
Was fluoride grandfathered in by the FDA because it was sold as rat poison prior to 1938?
17
Did Richard Nixon commission a study on the effects of THC and then have the results classified?
86
Did Donald Trump make campaign contributions to Attorneys General who then decided not to prosecute him?
12
Did some people in the UK get £100k in benefits?
25
Did the number of U.S. Food & Drug Administration food safety inspections fall from the 1972 to 2006?
15
Do Black Lives Matter donations get funneled to the Democratic Party?