Did the crime rate drop after mandatory gun ownership in Kennesaw, Georgia? 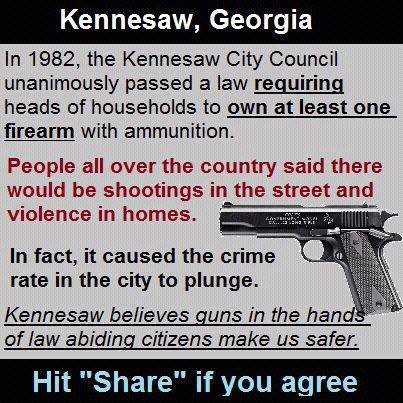 1.Was such a law actually passed?
2.Did crime rates in the city really drop?

Yes, as explained in Kennesaw, Georgia's 1982 Gun Mandate Still On The Books, Every Home Owns A Gun:

Kennesaw's 1982 gun mandate was a direct response to a gun -ban- enacted a year earlier in Morton Grove, Illinois. That was later deemed unconstitutional, but Kennesaw's law is still on the books.

Added Lt. Graydon, "It was not meant to be an enforceable law. The police department has never searched homes to make sure you had a gun. It was meant more or less as a political statement to support citizens' second amendment rights to own firearms."

After the law went into effect in 1982, city leaders say they witnessed a 29% drop in crime. Over the last 30 years, the crime rate has remained low with just four gun-related homicides.

Kennesaw once again was in the news on May 1, 1982, when the City unanimously passed a law requiring "every head of household to maintain a firearm together with ammunition." After passage of the law, the burglary rate in Kennesaw declined and even today, the City has the lowest crime rate in Cobb County.

In 1981, the year before the ordinance was adopted, Kennesaw recorded 55 house burglaries. The next year there were 26, and in 1985 only 11. Meanwhile, Mr. Stephenson said the city had recorded no deaths or injuries as a result of gun accidents.

[This is currently only a partial answer, in that addresses only one of the multiple claims. Feel free to steal it for your own fuller answer.]

The Kennesaw, Georgia Code of Ordinances currently does contain this law.

This does not demonstrate causality, nor even correlation, with crime figures.

30
Does increased gun ownership in the US correlate with a reduction in violent crime rates?
74
Did the National Rifle Association (NRA) block research into statistics related to gun control?
28
Did a Florida woman get 20 years jail for firing warning shots in the air?
31
Did violent gun crime rates rise in Australia after the 1996 gun control laws?
101
Did the UK homicide rate go up after handgun ownership was banned?
8
Did police search a student's home after a square root symbol was mistaken for a gun?
12
Did the 1994 US crime bill "bring down crime"?
5
Did Heimlich maneuvre posters become mandatory in New York shortly after that technique was performed on mayor Ed Koch in 1981?
53
Did the 2nd Amendment limit the purchase of cannons from the day it was passed?