Have the ending credits of Rambo III been changed?

I've seen this comparison of the ending credits of Rambo III: 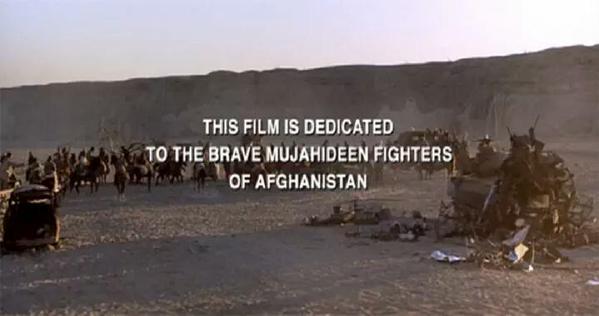 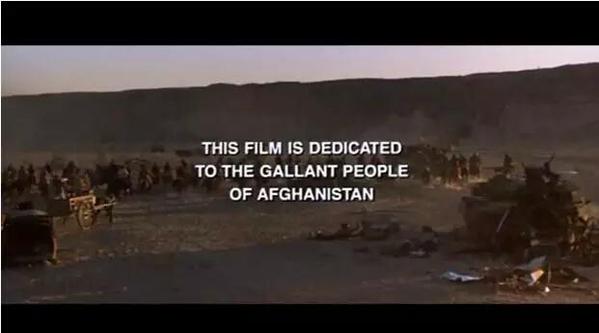 Did this happen, or is it manufactured?

Original sources from the time of the movie's release, 1988, state that the film is dedicated to the "gallant people of Afghanistan".

When he does pitch in it's only in order to rescue the Colonel, before becoming converted to the cause of the 'gallant people of Afghanistan' (to whom the film is dedicated). And if the previous Rambo films have been replays of Vietnam with...

"Rambo III" Is dedicated "to the gallant people of Afghanistan," and it clearly intends that its politics be taken seriously. The plot sends Rambo into Afghanistan on a rescue mission after Trautman, who has been educating Afghan freedom...

The New York Times article is from the exact day the movie opened in theaters.

Rambo III was dedicated to the "gallant people of Afghanistan" from the beginning.

Dedicated to the "gallant people of Afghanistan," the film intends to be taken seriously. It starts with a prologue showing Rambo's newfound inner peace ("My war is over").

Additional evidence that the "Mujahideen of Afghanistan" image is fake can be seen from a few screencaptures of the 2004 release DVD, which contains the latter line in the image. If the claim is true, this would imply that the DVD has been edited from the original. However, the two captures from the movie are taken at different times.

At the end of the movie, before the credits roll, Rambo drives out of the scene, revealing an army of Afghan mujahideen riding into the distance.

At the timing that corresponds to the "Mujahideen" image, it can clearly be seen that there is no text on the screen.

The same scene four seconds later shows the "Gallant People" image, and there is text on the screen.

Therefore, given that none of the news sources when the movie was released mentioned the "Mujahideen" wording, and the video image of the scene at the point where the alleged "Mujahideen" image was taken has no text overlay, it is reasonable to conclude that the author of the images has dishonestly added the text via image manipulation. While this evidence is insufficient in isolation, it is strong evidence when combined with the other answer.

Not the answer you're looking for? Browse other questions tagged united-states movies afghanistan .

12
Is Trump the first politician to go on a victory tour since the Nuremberg Rallies?
74
Did the maps for services such as Snapchat, CitiBike and StreetEasy label New York City as “Jewtropolis” for a brief amount of time?
9
Did a man get heckled for dressing up as a Nazi—and dressing up his son as Adolf Hitler—at a local Halloween event in 2018?
7
Did David Prowse know his voice would not be used for Darth Vader?
3
Did 30 U.S. Marines die in a helicopter crash between January 24th and January 27th, 2020?
26
Are "bait bricks" real?