Do we lose most of our body heat through our heads?

If you didn't grow up in a tropical climate, you probably heard something like this as a child...

Put on a hat before you go out because you lose the most heat through your head.

Some say that the reason you lose more heat through your head is because "heat rises" and most of your body heat naturally escapes though your head.

Does more body heat escape from our heads than from other parts of the body?

medical-science biology
Share
Improve this question
asked May 4, 2011 at 20:42

You can lose 40 to 45 percent of body heat from an unprotected head and even more from the unprotected neck, wrist, and ankles. These areas of the body are good radiators of heat and have very little insulating fat. The brain is very susceptible to cold and can stand the least amount of cooling. Because there is much blood circulation in the head, most of which is on the surface, you can lose heat quickly if you do not cover your head. - FM 21-76 US ARMY SURVIVAL MANUAL, BASIC PRINCIPLES OF COLD WEATHER SURVIVAL, PG 148.

Can this be right ? Does more body heat escape from our heads than from other parts of the body ?

In general, heat loss is essential to provide thermoregulation and prevent excessive heat build-up in the body to avoid the consequences of heat stroke. However, heat loss in the head is the same as for any exposed body part. The exposed surface area of the body, along with relative humidity and temperature, determines heat loss primarily through evaporation and our head makes up only 10 percent of body surface area. So, at rest, heat loss through the head accounts for only 7-10 percent of total heat dissipation. - source

See below: General heat loss through the head.

But, this is important, if they are shivering, the percent of heat loss via the scalp can increase to upwards of 55%, so protecting the head well is a very important part of treating the hypothermia patient. And as you can imagine, the primary defense against the cold and hypothermia is vasoconstriction of the peripheral circulation, this shunts blood to the core, reduces circulation to the skin, and increases the percent of heat loss through the scalp. - source

General heat loss through the head

One hypothesis predicts a substantial heat loss through the head due to the great amount of surface blood flow in the scalp and because scalp blood vessels do not vasoconstrict in response to cold as do surface vessels in other body areas (8). An alternative hypothesis predicts minimal heat loss from the head because submersion of the head and neck would only involve 7–9% more of the body surface area (20). As well, mathematical modeling predicts minimal conductive heat loss directly through the scalp and skull (27).

The present results are consistent with previous data (9) in that the supposition of proportionately greater heat loss from the head was not supported. 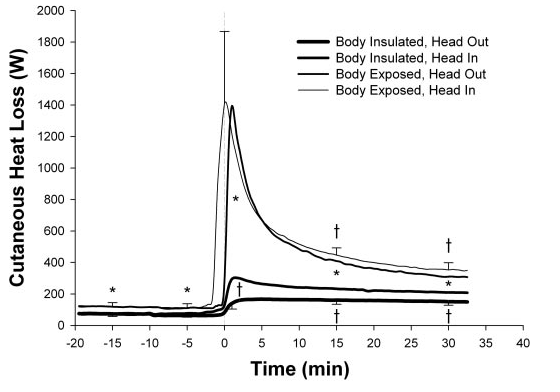 The measured heat loss from the head in both head-in conditions was only 100 kJ (compared with 17 kJ in the two head-out conditions). In contrast, total heat loss in the body-exposed configurations was 914 and 988 kJ, for head-out and head-in conditions, respectively. In the latter case, the head accounted for only 10% of the total body heat loss when both the head and body were submersed. The surface area of the submersed head is 7% of the total surface area of the body. 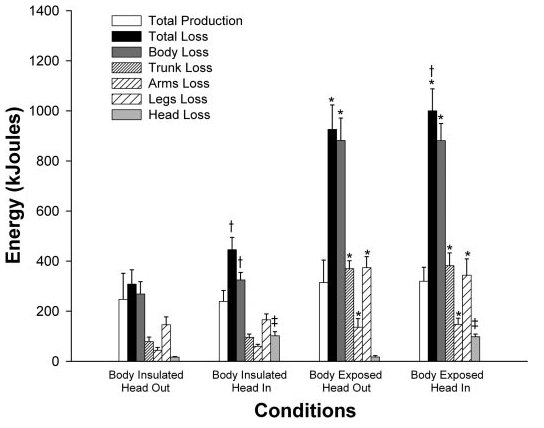 These results thus indicate that heat loss from the head is not disproportionately increased over what would be expected from the head’s contribution to total body surface area.

With the body exposed to cold water and shivering intact, additional dorsal head immersion increased core cooling from 3.8 to 9.4°C/h (250%) in 1–2°C water.

Bear in mind that the rest of the body is usually clothed which provides the most important insulation of the body, as can be seen in a thermal scan image: 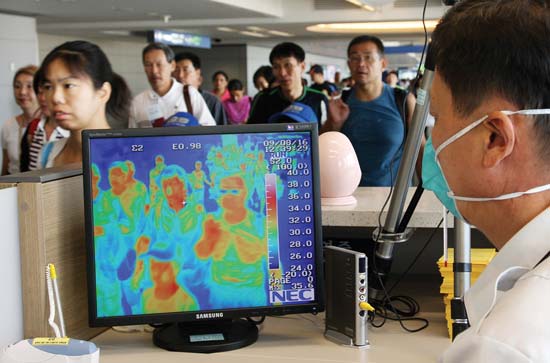 However, this image also shows that hair is actually a pretty good insulator as well. So while a clothed human indeed loses much of their heat through the head, donning a hat won’t help.

There is another aspect: the body will strive to keep the core body temperature constant. If necessary, it does this by down-regulating blood circulation (and consequently heat exchange) in the periphery (arms, legs); in contrast, the blood circulation through the head (in particular, the brain) stays almost constant:

In fact, next to the trunk (clothed!) the head emits the most amount of heat per area (skin temperature of 34.6°C) [source: Blatteis, Physiology and pathophysiology of temperature regulation, p. 17], and also the most total energy of any non-clothed area [ibd.].

So yes, when clothed (and not immersed in water; this diminishes the insulating effect of clothing significantly!) we do indeed lose most of our body heat through our head. However, except for bald people, hats may not help that much (to maintain the core body temperature).

Reports say that the claim is a misunderstanding of the user manual for an early survival suit. If your body is well wrapped, then the head becomes the main vector of heat loss.

There are real life consequences to cold water immersion, such as in the sea. The head is the only part of the body exposed, so what happens is waves continually wet the head and then the wind evaporates the water thereby cooling the head far more effectively than if the head remained dry and free from wind. In this case the head does lose a lot more heat than other parts of the body which will typically have clothing on which acts in some way as an insulator. This is why some life jackets have built in wind proof hoods. Couple that with a thermal hat and the head is no longer a major heat loss.

35
Are we eating too many carbs? And do we need to switch to the primal/paleo diet?
18
Does sleeping with our heads pointing towards north pose any health risks?
10
Is soluble fiber a miracle dietary component?
18
Does drinking while eating impair digestion?
14
Does the fasting two times a week diet (the 5:2 diet) provide health benefits?
17
Did Richard Nixon commission a study on the effects of THC and then have the results classified?
12
Does consuming a surplus 3,500 calories lead to the gain of one pound of body fat?
10
Can weight gain be due to underlying health conditions?
1
Did the Garuda Purana explain the formation of embryo and consciousness before modern science?
5
Are gut bacteria a cause of depression?