Are a majority of the FBI's most wanted fugitive murderers born outside the USA?

American News posted an article in defense of some recent comments by Donald Trump.

'the Center for Immigration Studies reported that “57 of the 76 fugitive murderers most wanted by the FBI were foreign-born."'

American News doesn't appear to be a reliable source, and I have been unable to confirm that statistic.

Are there studies that support the claim that the majority of fugitive murderers most wanted by the FBI are foreign-born?

Additionally, how many of those fugitives were born in Mexico (and hence add some relevant evidence to support Trump's claim)?

The Center for Immigration Studies released a study in 2009 which makes the claim given in the question. Its claim was misquoted (as 57/76 instead of 57% of 76): 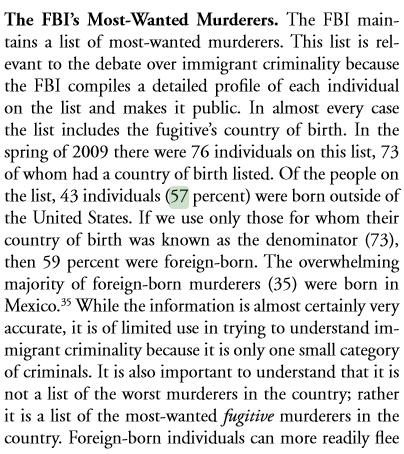 It gives the source as the FBI Most Wanted For Murders List.

The CIS study further stated that an overwhelming majority (35/43) of them were Mexican.

Assuming that the list has not changed significantly in composition since 2009, we can directly fact-check this list to verify this claim. A cursory sample of the wanted criminals listed shows that indeed a significant proportion of them are foreign born, and the majority are Mexican.

Not the answer you're looking for? Browse other questions tagged united-states law-enforcement mexico .

33
In the USA, is AIDS most prevalent in the gay male population?
22
Did most Mexicans who are in the U.S. illegally, enter through legal means?
98
Are Americans more likely to be killed by vending machines than terrorist refugees?
12
In USA the foreign-born are only a fifth as likely to be incarcerated as the native-born?
6
Does most illegal fentanyl sold in the US come through Mexico?
12
Did Trump tweet the most liked Persian language tweet in history?
34
Are all French citizens who go outside their home legally required to carry official papers with a reason why they are out (Covid-19 lockdown)?