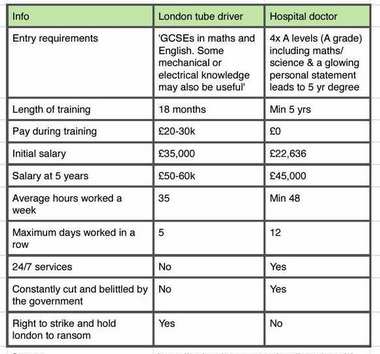 The claims are as follows:

Is this table factually accurate?

The sources appear to be these for train driver and hospital doctor.

Neither of the source documents are specific to London, these are for hospital doctors and generic train drivers across the entire United Kingdom, not specifically London Tube drivers or London doctors. NHS employees in inner London get 20% extra pay up to a maximum of £6,342. Outer London NHS employees get 15% extra.

The chart says the "starting salary" for a doctor is £22,636 but the source says this salary is for a "junior hospital trainee". Immediately after that figure it says:

This increases in the second year of foundation training to £28,076. For a doctor in specialist training the basic starting salary is £30,002.

Two-year foundation programme - you will work in clinical settings ranging from acute care to mental health. By the end of this training you will have full registration with the General Medical Council (GMC) and you will have chosen the area of medicine you want to practise.

You will be assessed throughout your training and if your skills meet the required standard, you will be awarded the Certificate of Completion of Training (CCT). This means that you will be eligible to join the GMC Specialist Register and apply for a licence to practise. For more information check the GMC website.

This also implies that you do not have a license to practice medicine until after the two-year foundation programme which makes calling the salary you earn during this time a starting salary inaccurate.

The source states directly after the starting salaries:

Doctors in training are paid extra if they work more than 40 hours or they work outside the hours of 7am to 7pm, Monday to Friday. This is usually between 20% and 50% of the basic salary.

Which suggests that some trainee doctors earn more than the basic salary.

If we consider this foundation programme to be training rather than a starting salary for a fully qualified doctor then it should be compared to the £20k - £30k training wage for a train driver. It is still possible that some trainee doctors may earn less than some train driver trainees in the first year of training but most doctors will be earning more by the second year, even if they do no overtime or unusual hours. It's worth noting that for the London Underground drivers, some shifts will start before 6am and some will end after 12pm. This BBC article says "as early as 04:45 and end as late as 01:30".

No mention is made in the chart of the higher salaries that doctors can earn.

The chart states a value for a salary at five years but this information is not included in the source. The value £45,000 does not appear in the source. The average of the specialty doctor range listed above is around £53k however it should be noted that we don't know the actual distribution within this range.

A lot of GPs are self-employed and have a contract as part of a Clinical Commissioning Group (CCG). In this role you may earn more than a salaried GP. Your income will depend on the type of services you provide for your patients and how you run your practice.

The chart says that tube drivers earn £50k - £60k per year but the source says:

Elsewhere, a specific value for top of the salary scale for tube drivers is listed as £49,673. ASLEF (the train driver's union) lists it as £48,133

Various sources state that London Tube drivers salaries do not change based on the time spent in the role.

European legislation has reduced the number of hours you can do to no more than 48 per week.

Tube drivers typically work 36 hour weeks but get extra time off for this being above 35 hours.

I would imagine most doctors are well aware that a university degree actually has a negative value, not £0 as it costs a significant amount of money.