In the newest episode of Q&A (which was broadcast on Monday, 29 June 2015), a theoretical physicist and cosmologist named Lawrence Krauss from America, made this statement/comment.

There's been a study in America that being an atheist is viewed on the level as being a rapist. It's the same thing.

The quote is taken from this video: Radicalisation, Religion & Recognition between 54:50 and 55:10.

The context was whether it's possible for someone who is running for political office in America to admit to being a atheist.

What is this study?

The paper is composed of 6 studies. The first of which surveyed US citizens, comparing how they reported their feelings about gay men in contrast to atheists.

The remaining five studies used a sample from a pool of psychology students from University of British Columbia (Canadian). Of these studies the only one that used the group "rapist" was study 2.

So already, our answer seems to be no. (though, of course you can't prove a negative) But let's go ahead and take a look at the study anyway.

Participants read the following description of an untrustworthy man who is willing to behave selfishly (and criminally) when other people will not find out:

" Richard is 31 years old. On his way to work one day, he accidentally backed his car into a parked van. Because pedestrians were watching, he got out of his car. He pretended to write down his insurance information. He then tucked the blank note into the van's window before getting back into his car and driving away.

Later the same day, Richard found a wallet on the sidewalk. Nobody was looking, so he took all of the money out of the wallet. He then threw the wallet in a trash can. "

Next, participants chose whether they thought it more probable that Richard was either 1) a teacher, or 2) a teacher and XXXX. We manipulated XXXX between subjects. XXXX was either

The only difference in descriptions across targets was that the Muslim target was called "a man" rather than "Richard".

So the conclusions were drawn based on how often the conjunction fallacy was committed with a 31 year-old teacher named Richard who committed insurance fraud and stole the money from a found wallet, since no one was looking (and threw the wallet away).

In sum, participants frequently committed the conjunction fallacy when given a description of an untrustworthy person and a target who could be an atheist or a rapist, but not for targets who could be a Christian or a Muslim.

It's not mentioned how the authors think Richard being a teacher would have affected the likelihood of the conjunction fallacy with atheist among these college students; or what affect him sharing his name with one of, if not the, most prominent atheist might have. 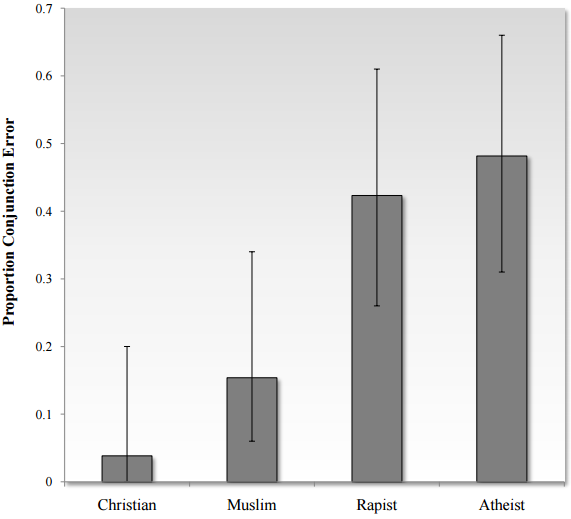 The pool the students were drawn from was a bit interesting as well.

One last thing of interest:

In an additional analysis, we examined whether atheists distrust other atheists. We isolated a subsample of 49 individuals from the total sample who indicated that they do not believe in God (based on the binary Yes/No belief question). Atheists Distrust within this subsample did not significantly differ from zero, t(48)= -.08, p= .94, indicating that whereas religious people strongly distrust atheists, atheists neither trust nor distrust atheists, relative to people in general.

This topic is whether there is a study which found that an atheist is viewed on the level of being a rapist (but not whether the study is accurate i.e. whether it's true that the view exists, nor whether that view is true if it does exist).

There is (was) a study titled Do You Believe in Atheists? Distrust is central to anti-atheist prejudice. This paper was published in the Journal of Personality and Social Psychology).

It shows that atheists and rapists were distrusted to a similar degree.

A description of a criminally untrustworthy individual was seen as comparably representative of atheists and rapists, but not representative of Christians, Muslims, Jewish people, feminists, or homosexuals (Studies 2-4).

And the body says:

On the other hand, this description—of an individual who commits insurance fraud and steals money when the chances of detection are minimal—was only seen as representative of atheists and rapists, and people did not significantly differentiate atheists from rapists.

A graph also was found showing how atheists were found to fit the description of an untrustworthy person more than christians, muslims or rapists: 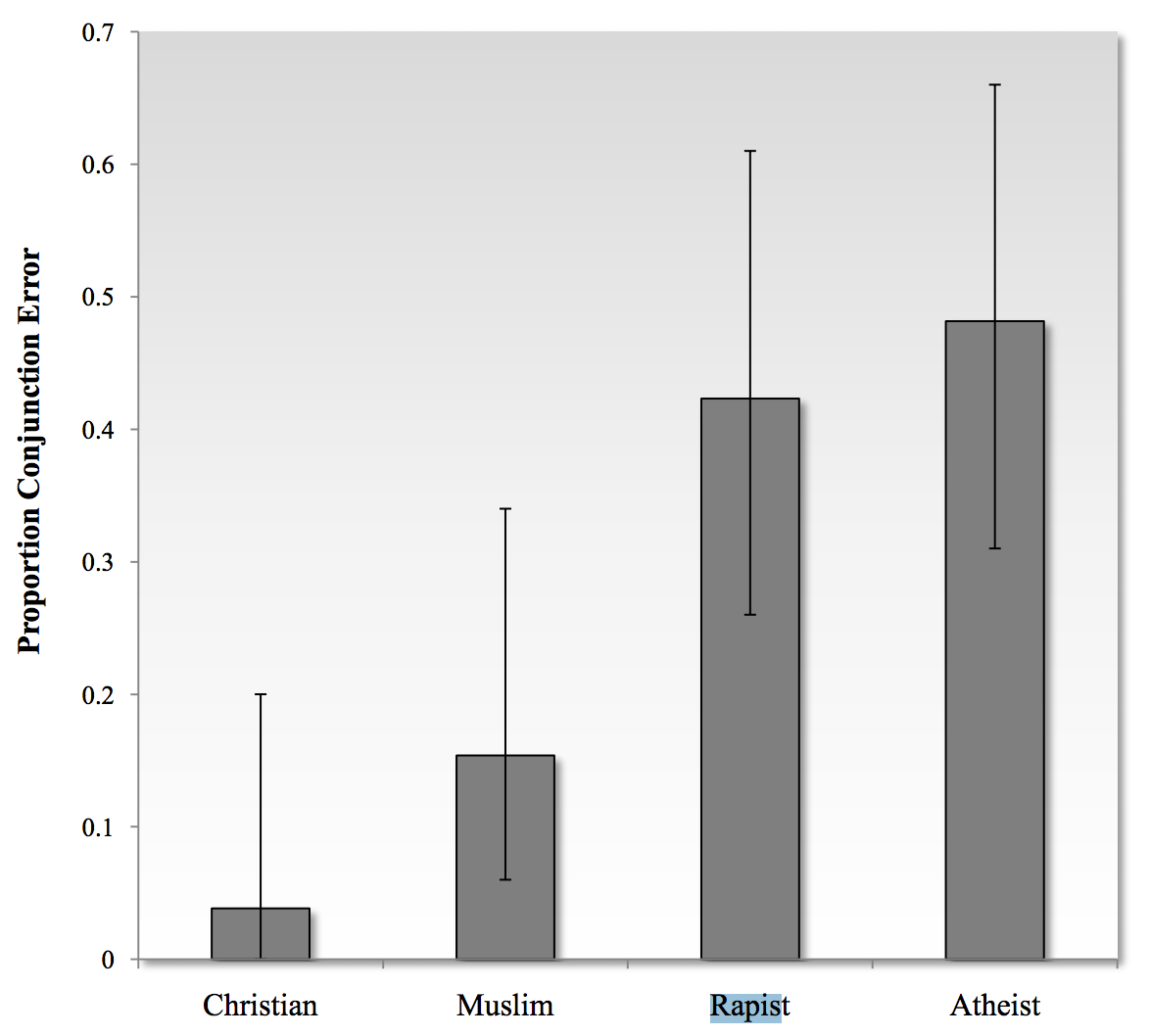 This study has garnered national headlines in The Blaze, The National Post, The Atlantic, Scientific American and the Huffington Post for busting the fact that “religious people rank non-believers alongside rapists”.

16
Is there evidence to support that Area 51 was just a cover-up for a much larger operation?
17
Was there a law ever passed that prevented two trains from proceeding at a crossing?
41
Was there no tax before 1913 in the United States?
1
Are there any historical records that say Christian colonizers viewed the American Indians as Amalekites?
8
Do leftist groups claim that "the Caravan" was "cooked up by Republican operatives"?
1
Was the prosecutor in the first Epstein trial told that Epstein is an intelligence asset?