Was the 30th of June the closest Venus and Jupiter have appeared since 2 B.C?

Browsing Facebook's trending section on the conjunction between Venus and Jupiter, I found several individuals claiming that this is the first time since 2 B.C that the two have gotten as close as they have. 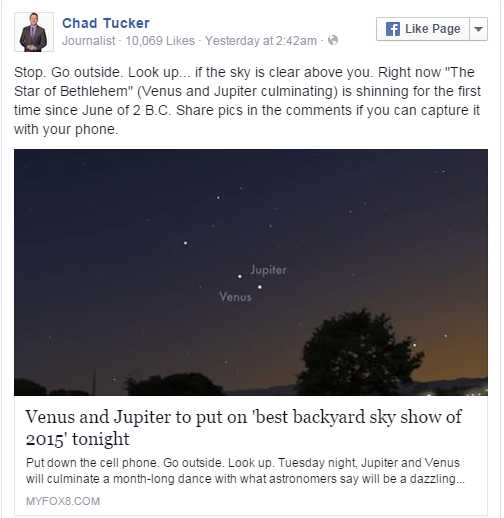 According to this page, a 'striking' conjunction between Jupiter and Venus happens every 20 years or so, but the definition of 'striking' in this case is one as good as the one in 1916.

Yes and No, respectively

TLDR: Venus and Jupiter passed in front of one and other in 2 bc and have since done so, but will not do so again until 2065.

Let's get a couple definitions out of the way...

A conjunction is an event when two or more astronomical bodies appear close to one another in the sky.

Occasionally they will pass so close to one another that the Moon passes in front of one of the planets; this is called an occultation.

The planets form conjunctions with one another more rarely since they move across the sky more slowly. However, striking planetary alignments typically occur every few years.

As the page you linked : The Frequency of Striking Conjunctions of Venus and Jupiter goes into, the significance is due to how closely they pass. Well, we can do one better, necessarily if they occult, then they must, at some point been the same as this one (and even better). So when was the last Venus-Jupiter Occultation?

So there was a closer conjunction in 1818.

but also lists a few going back, including ...

The next one seems to be in 2065. But it will apparently happen near the sun so won't be possible to see.

6
Can the events of the Ramayana and Mahabharata be astronomically dated to around 7300 BCE and 5561 BCE respectively?
11
Do ancient Hindu texts predict the future expansion of the Sun?
11
Does the 'super-moon' have a measurable effect on probability and magnitude of earthquakes?
10
Did the Indian Mathematician Aryabhata state that the earth was round and calculate diameter of earth