There is a widely published meme that you keep thinking after you die: 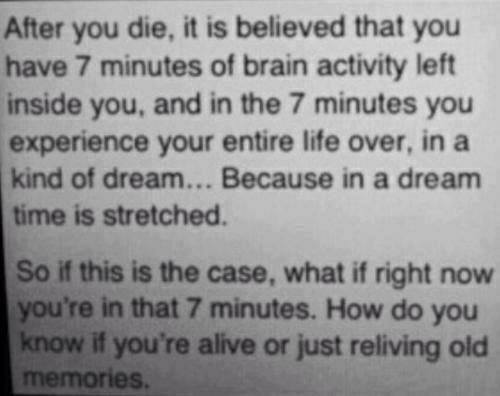 After you die, it is believed that you have 7 minutes of brain activity left inside you

Obviously it doesn't hold true if one is shot to the head, but if one has a heart attack or is decapitated with the brain remaining intact is it true?

(I have also heard that while active in these final moments, the brain releases dmt (N,N-Dimethyltryptamine) which causes one's life to flash before his eyes.)

Pretty sure that's going to be a "define alive" situation...

He hit the nail on the head.

The definition of death has changed throughout history. In the United States, the declaration of legal death is generally influenced by the Uniform Determination of Death Act (1980) (a short summary of it and related laws can be found here). The UDDA was needed to get rid of the discrepancy between clinical death and brain death. The former was historically based on the stoppage of cardiorespiratory activity, while the latter (a newer approach) is based on brain function. The UDDA elaborates on this conflict:

The medical profession, also, has developed techniques for determining loss of brain functions while cardiorespiratory support is administered. At the same time, the common law definition of death cannot assure recognition of these techniques. The common law standard for determining death is the cessation of all vital functions, traditionally demonstrated by an “absence of spontaneous respiratory and cardiac functions.” There is, then, a potential disparity between current and accepted biomedical practice and the common law.

As mentioned in the summarizing source, the UDDA does not define death. Either definition may be used. The New York Times, seven years later, also mentions that some states (40 total, at the time) had enacted similar measures on a state level.

A state related to brain death is brain stem death, which must not be confused. The two are treated different legally as well as medically. From the same New York Times article (giving a state-specific example):

The new definition would not apply, for example, to patients who have lost higher brain function, but who retain brain-stem, or autonomic lower-brain activity, such as the late Karen Anne Quinlan in New Jersey. Such patients can maintain heart and respiratory function with or without mechanical assistance and would be considered alive under the new regulations Under Study in New Jersey.

So, according to federal law, if a doctor applies the brain death option of the UDDA, then the claim is absolutely false, by definition. It gets more complicated if you use the other definition, related to cardiorespiratory activity.

If the brain receives no oxygen, it succumbs to cerebral hypoxia. Brain damage can begin within about four minutes, and brain death can occur at about four to six minutes. I think this might have influenced the claim. How Stuff Works, by the way, sets a figure of six minutes.

So, to answer the question:

Not the answer you're looking for? Browse other questions tagged medical-science physiology near-death-experience .

60
Is there any explanation for a near-death experience?

208
Is popping your knuckles bad for you?
23
Does your heart stop beating when you sneeze?
5
Can you die from breathing your own farts?
14
Is shaving your pubic hair bad for you?
23
Does sleeping naked in a sleeping bag keep you warmer?
9
Does the nose stop smelling a scent after a few minutes?
7
Is brushing your teeth after vomiting dangerous for your teeth?
17
Does it take time for the brain to realize that you have eaten too much?
6
Does running cold water on your wrists cool you down rapidly?