Is Roberto Nevilis the inventor of homework?

There is a claim that Roberto Nevilis invented homework in 1905 (sic). And it doesn't seem to be a recent meme - there are tons of pics for this meme claiming: 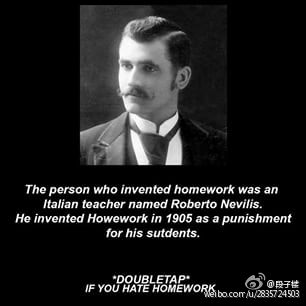 The person who invented homework was an Italian teacher named Roberto Nevilis. He invented Howework (sic) in 1905 (sic) as a punishment for his sutdents. (sic)

To what extent is this claim true?

In 1901, the California legislature passed an act that effectively abolished homework

A lot of websites seem to claim this, but the only ones that actually reference their source direct to Wiki Answers.

Scientists believed that Roberto Nevilis from Italy started homework in 1095. He was a school teacher in Venice.

This seems a little dodgy for a few reasons:

"Scientists believed" - surely it would be Historians? What Science is being done to determine it here? And why is it believed not believe? It seems a little made up.

"Roberto Nevilis" - there is nothing online about him except for sources similar to Wiki Answers (which I wouldn't say counts as a source). Roberto is an Italian name, but Nevilis seems to be made up. I checked with a number of Last Name sites, and only one found this surname, from a single person in the USA.

This seems to be getting more and more terse.

Now, education in Italy in 1095 was probably very minimal. In 1095 the Pope was organising the first crusade, and an organised education system wasn't created untill 1859. While it is likely that there was some schooling (based on English History) there was very little:

Education was still largely about vocational training and most pupils were still intending monks or priests, though 'there was probably an occasional extension, and there are certainly some recorded cases of the education of young members of royal and noble families'.

Note that the Romans did have schools, but by 1095, the Roman empire had well and truly fallen.

So it is likely that there was education, but probably not schools in the same way. Instead, nobility would have been taught in their homes, by tutors:

Henry VIII's education benefited from the instruction of many tutors

So there would have been little concept of homework from that time because all work was done at home.

The idea that homework was invented because of the expense of the presence of tutors also falls down here - royals typically have a lot of money.

Finally, there is a photograph attached to the quote. The image is of Burritt Haynes (found on this reverse image search), and he is from Winneshiek County, Iowa. So not even Italian. Also, it's a photograph. Not a painting.

So, I doubt the claim made here.

Not the answer you're looking for? Browse other questions tagged education .

11
Did “secular” mean “non-denominational”?
10
Do individuals rise to the level expected of them?
6
Importance of teacher diversity in closing the achievement gap?
5
Can one hour of TV per day worsen GCSE grades?
27
Does homework improve student performance?
12
Do people with ADHD have a college graduation rate of 5%?
1
Has student enrollment in economic degrees fallen?