I've heard a folk legend that Dr. Benjamin Spock, author of the controversial best-seller "Baby and Child Care", recanted his teachings later in life. Is this true?

"We have reared a generation of brats. Parents aren't firm enough with their children for fear of losing their love or incurring their resentment. This is a cruel deprivation that we professionals have imposed on mothers and fathers. Of course, we did it with the best of intentions. We didn't realize until it was too late how our know-it-all attitude was undermining the self assurance of parents."

While the other answers available focus on other claims, this answer morbidly focuses on the quote you mentioned.

After extensive research, I found out that a lot of books (book 1, book 2, book 3, book 4, etc...) referenced the source of your quote to the Redbook magazine:

As a double check, even the New York Times said that Spock wrote for the Redbook:

He wrote columns about raising children for Redbook and Ladies Home Journal and, more recently, for Parenting magazine.

After endless research, I was able to find a partial view of the article from the Redbook Magazine from February 1974, p. 29: 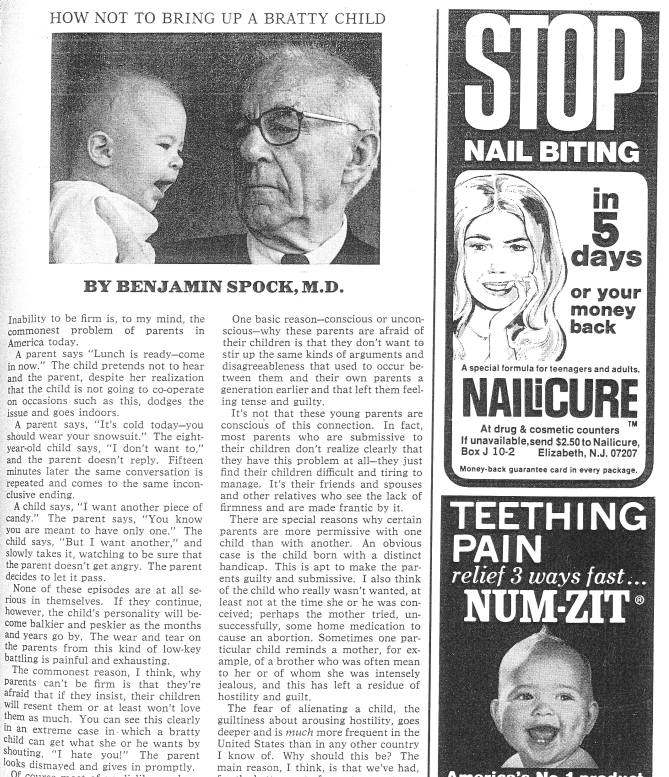 We were extremely lucky to find such snapshot, literally, the magazine dates from 1974 and is currently out of stock.

The quote is also cited by an academic study called "The science and statistics behind spanking suggest that laws allowing corporal punishment are in the best interests of the child" which cites part of the quote:

In the 20th century parents have been persuaded that the only people who know for sure how children should be managed are the child psychiatrists, psychologists, teachers, social workers and pediatricians—like myself. This is a cruel deprivation that we professionals have imposed on mothers and fathers. . . . We didn’t realize, until it was too late, how our know-it-all attitude was undermining the self-assurance of parents.

This is the reference mentioned:

Moreover, the U.S. Department of Education, a governamental source, confirmed also in a study published in July 75 that Benjamin's claim in the Redbook is valid. This is how the abstract looked back then: 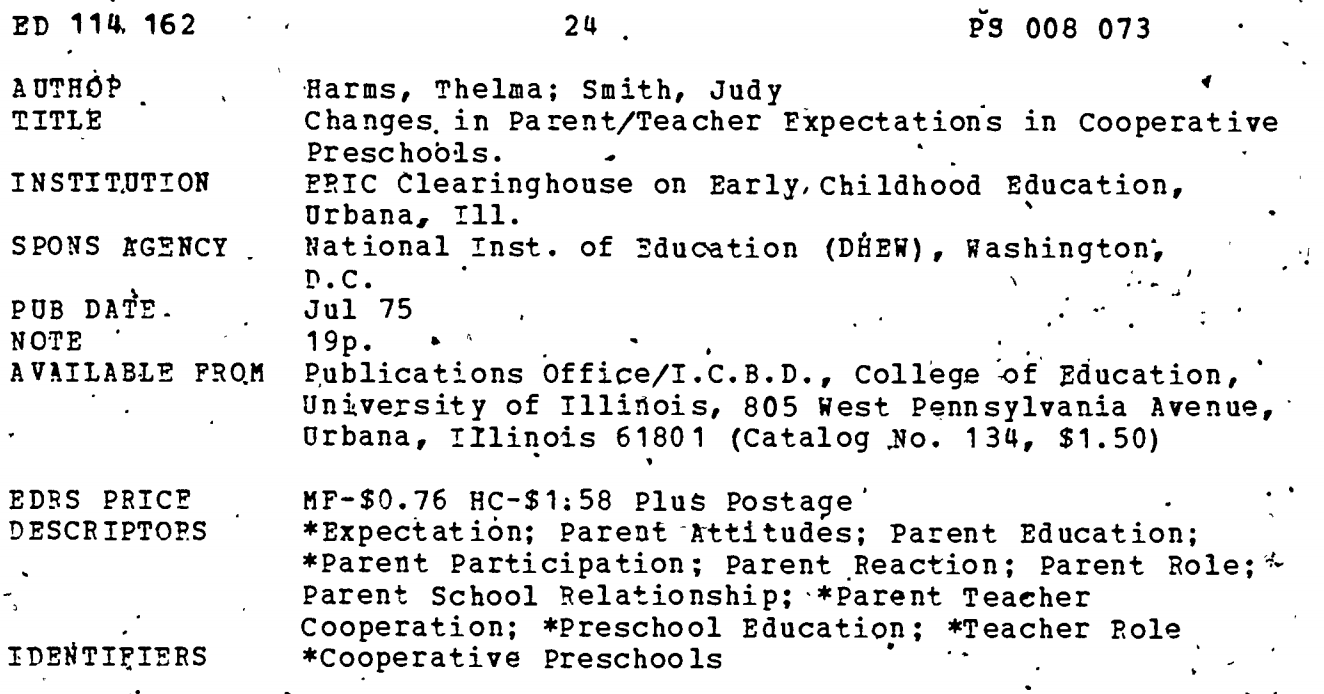 And this the quoted text:

When Dr. Spook writes an article entitled "How not to raise a bratty child", and books advising parents to teach their 15 month old child to read are selling briskly,. we know we're in the midst of a pendulum swing to the opposite pole from permissiveness.

Moreover, with the help of the archive of Google News, I was able to extract a news article from Beaver County Times - Jan 23, 1974:

As you see, this news article, assuming it was reputable back then, has exactly the quote in your question, makes it valid also.

Now, that we know that the quote is legit. Back to the real question, did Dr. Benjamin Spock recant his child-rearing teachings later in life?

The archive of Google News helps again answer this question where Spock denies that he recanted his child-rearing teachings later in life in The Milwaukee Journal - Apr 14, 1974.

I will quote the appropriate content from The Milwaukee Journal:

Has the good doctor done a turnabout? Does he look upon what he was wrought and find that the product is bratty, uncooperative and unpleasant? Has he changed his philosophy on bringing up children?

Spock answered some of those questions in a telephone interview last week as he discussed the Redbook article along with his new book "Raising Children in a Difficult Time".

No he hasn't recanted his philosophy of child rearing, yes, his Redbook column was misinterpreted, declared the feisty pediatrician.

Benjamin Spock admits his mistake of using the word 'bratty':

Spock: In the first place, I made the mistake of using the word 'bratty' in the article. Then the editors titled it 'How Not to Bring Up a Bratty Child'. That one word released a lot of hostilities. There are lots of people who like to think I'm wrong.

Spock: Because of my involvement in the antiwar movement, of course.

Interviewer: But back to that Redbook article. What did he say to get everyone excited?

Spock: One basic reason is that - consciously or otherwise - they don't want to stir up the same kinds of arguments and conflicts, they remember form their own childhood which left them feeling tense and guilty.

Spock: An unconscious, vicarious enjoyment at seeing their children misbehave in a way the parents were never allowed to do.

Interviewer: But the statement that put Spock on the front pages was this: We didn't realize, until it was too late, how our know-it-all attitude was undermining the self-assurance of parents.

Interviewer: What do you think of the young people whose upbringing you have influence (The influence is hard to deny considering the fact that "Child and Baby Care" has sold over 22 million copies since its first printing in 1946)?

Spock: They're marvelous! The great majority of young people are wonderfully clear eye in seeing what's going on.

Spock: I think it's marvelous that they refuse to be intimidated by authority.

Spock: When I was a first year medical student I was terrified of the lowliest instructor. But in my last year of teaching before retirement from Western Reserve University Medical School, I discovered how much things had changed.

Spock: You know, I have very old fashioned ideas about sex. I think there should be strong laws on pornography and they should be strictly enforced. Those things are simply not good for children.

Spock: The way we avoid irritation, whether we realize it or not, is by keeping our children under reasonable control and by being extra firm or sufficiently disapproving when things first threaten to go wrong. Such firmness one aspect of parental love. Firmness, by keeping children on the right track, keeps them lovable. And they love us for keeping them out of trouble.

Moreover, I have to quote passage from this study because it is extremely well-referenced:

Many people think Dr. Benjamin Spock started the anti-spanking movement in the 1940s. (1) This is not really true. Dr. Spock did not oppose corporal punishment until the late 1980s—the twilight of his life. (2) For most of his career, he believed physical discipline could be helpful, depending on the parent’s temperament. (3)

(3) See, e.g., Benjamin Spock, M.D., What I Said in February About Raising Children—And What I Did Not Say, REDBOOK, June 1974, at 31 (“[W]hen I gave talks about child rearing, at least one of the reporters attending a press conference would ask immediately whether I believed in spanking children—as if this were by far the most crucial issue in child care. I would have to disappoint him by discussing all the other more important factors that go into good behavior, such as the child’s love of parents, wanting to be like the parents, the clarity and consistency of the parents’ leadership. Even when the question about spanking was repeated, I’d have to say that it depended on whether the spanking parent was generally kind and devoted or merely expressing ill temper that had little to do with the child’s behavior.”).

Note the extreme importance of third reference, where Spock explains what he wrote on "How to Not Bring Up A Bratty Child." on February 1974.

Also, as a double check for the validity of the claims, those are the references mentioned by the U.S. Department of Education, a governamental source:

From Dr. Spock On Parenting: Sensible, Reassuring Advice for Today's Parent at page 165:

Then, a dozen years ago, there was a report that I had disavowed my previous philosophy, a report that resulted indirectly from a Redbook press release...

The newspaper editors and newscasters who were under the impression that I was permissive interpreted the press release to mean that I had now turned my back on that philosophy because it produced spoiled children. This brought me endless requests for interviews from publications all over the world wanting to know why I recanted. I denied that I had ever been permissive or ever changed my mind. But it is impossible to counter an incorrect report. I'm still asked the same old questions almost every week of my life. So you can see why I'm touchy.

Of course, I have changed many things since Baby and Child Care was first published. But my basic philosophy about discipline and management of children has not changed...

Similarly, in the 3 June 1983 newspaper article on page 7 of The Baytown Sun from Baytown, Texas:

As he celebrates hs 80th birthday, Dr. Benjamin Spock, the famous pediatrician whose teachings have influenced the raising of millions of children around the world, wants the record set straight once and for all — he has never advocated permissive child rearing. "Since 1968, I have teen hounded and raunted by the accusations of those who say that I advocate permissive child rearing," Dr. Spock says. "And some other people claim that I renounced my permissive philosophy and turned strict. If 'permissive' means allowing children to have and do and say almost anything they want (which is what most people think it means), then I never had such a philosophy. In fact, I believe the opposite; I'm bothered — really bothered — when children are allowed to be rude or demanding or uncooperative." Dr. Spock says false accusations began soon after his indictment for anti- Vietnam War activities. Some foes, he said, accused him of advocating "instant gratification" a charge that showed they had not read his book "Baby and Child Care." Then, eight years ago, a press release heralding a forthcoming article by Spock was headlined "Why are there so many bratty children? Dr. Spock blames the experts." This evoked further misunderstanding. Dr. Spock says "The newspaper editors and newscasters who were under the impression that I was permissive interpreted the press release to mean that I had turned my back on that philosophy because it produced spoiled children. I denied that I had ever been permissive or that I had changed my mind. But it's impossible to counter an incorrect report. "I'm still asked the same old question every week of my life. You can see why I'm on the defensive," Dr. Spock says.

Here is a quote in which he answers "no" to this question.

I've been asked a thousand times: have I ever changed my opinion on child rearing? And the answer is no, at least not about my basic belief that it is wise to respect children, but also not to forget to ask respect from them.

The two or three topics on which he's changed his mind the most, he said/explained in the rest of the chapter, are potty training, whether babies need "fresh air" in winter, and feminism/sexism.

28
Did Marcus Aurelius say “Live a good life”?
12
Did Oscar Wilde declare his genius to a customs officer?
7
Did Marie Curie say “Nothing in life is to be feared, it's only to be understood.”?
17
Did Einstein speak some unknown last words to his nurse?
93
Did Einstein say this about his marriage?
39
Did Benjamin Franklin warn the young American Nation against the Jews?
3
Did Karl Marx ever say “Life is struggle”?