Gulf War Syndrome, is it real?

The condition now called "Gulf War Illness" has been studied extensively,(1)(2) however, there remains great debate about its potential causes or whether it exists as a distinct condition.

About 700,000 men and women served in the first Gulf War (Operation Desert Shield, Operation Desert Storm). Nearly a quarter million of those returning were reported to have experienced or continue to experience symptoms and illnesses which led to an investigation as to whether or not they were caused by a specific toxic/hazardous/biological exposures which occurred during these operations.source

Some known and documented symptoms reported by those returning from the area, as well as those who are native to the region: 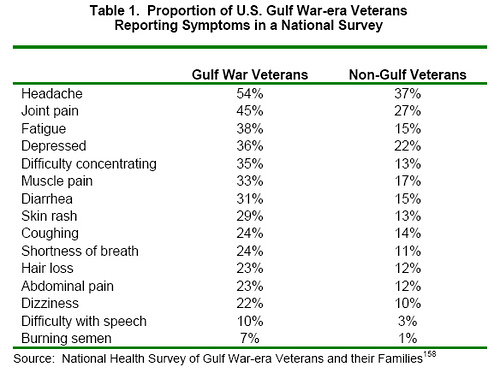 The signs and symptoms reported by sufferers are similar to Fibromyalgia and Chronic Fatigue Syndrome. All of these are ill-defined clinical entities which consist mainly of non-specific symptoms any of which could have a wide variety of causes. This makes definitive diagnosis of a specific Gulf War Illness very difficult. As it stands now, no single entity has been singled out as the cause:

“It is likely that multisymptom illness results from the interactions between environmental exposures and genes, and genetics may predispose some individuals to illness,” - Institute of Medicine Apr. 2010 report to Department of Veteran's Affairs

Some known and documented exposures (according to the US Dept. of Veteran's Affairs)considered as potential causes for these symptoms were:

Some have suggested psychological or psychogenic causes for the symptoms (which are no less legitimate medically). However, this is one of the theories that is most widely refuted, arguing that the evidence indicates a physical cause.

The Veteran's Administration assumes that certain illnesses (even if unexplained) are related to qualifying military service. These are called “presumptive illnesses." These include:

However, this isn't proof that Gulf War Illness exists as a distinct clinical entity, it is acknowledged and treated under the presumption that it does exist.

There are also many sources who cite theories of denial or cover-up by various governments or organizations.

Estimates place the number of sick soldiers for more than 150,000 and about 10,000 being dead already because of the syndrome. (Estimates may be optimistic). A study of the Gulf War Syndrome clearly shows it to be a virus that is not natural, but that has all the features of one created in the lab. One of the main suspects for the syndrome is an artificial agent called Microplasma fermentans (unknown origins). It contains most of the HIV genes, suspected to have been added through laboratory amendments. Of all the countries involved in Gulf War coalition, only France refused the inoculation. Until recently, there weren’t any reported cases of the syndrome among French soldiers. source

However, some claim non-cooperation from the government mainly inspired a lack of trust in official information, which added a level of complexity to finding the cause. They do not suggest outright conspiracy.

The first example of Pentagon non-cooperation that exacerbated suffering for veterans and their families was the constant denials, until 1996, of any health risks from widespread exposure to low levels of chemical agents. source

I know that this question is phrased mainly with regard to American personnel, but this is only because most of the information I found had to do with the US military. Answers can obviously include relevant information from other countries.

medical-science biology
Share
Improve this question
edited May 4, 2011 at 6:39

In 2008 there was a report (Wikipedia mirror, trying to download the original ends in broken links) released by a federal panel of scientific experts and veterans and commissioned by the Department of Veterans' Affairs which found that:

Gulf War illness fundamentally differs from trauma and stress-related syndromes described after other wars. Studies consistently indicate that Gulf War illness is not the result of combat or other stressors and that Gulf War veterans have lower rates of posttraumatic stress disorder than veterans of other wars. No similar widespread, unexplained symptomatic illness has been identified in veterans who have served in war zones since the Gulf War, including current Middle East deployments.

While the report does indicate two causal links for GWI, it was unable to rule out the influence of a number of additional factors:

The Committee found that an association between Gulf War illness and several other exposures could not be ruled out. These included low-level exposures to nerve agents, extended exposure to smoke from oil well fires, receipt of large numbers of vaccines, and combinations of neurotoxic exposures. There is some evidence supporting a possible association between these exposures and Gulf War illness, but that evidence is inconsistent or limited in important ways.

To answer your questions:

Is this a case of common symptoms originating from a wide variety of causes being grouped together after the fact, rather than one specific illness?

Yes, but there is valid evidence pointing to a real illness specific to the original Gulf War, which many sufferers of "GWI" actually have. Since GWI has not yet been officially defined, any person who served in the Gulf War and who suffers one or more of the many listed symptoms could rightfully call themselves a sufferer of GWI. That does not imply, however, that an actual GWI does not exist.

Is there evidence that Gulf War Illness does have a known cause that is being covered up by a conspiracy?

No, based on the federally funded programs researching GWI. The department of veterans' affairs set up and funded the committee investigating GWI. Why would a government attempting to cover this up fund scientific inquiry into it? Or do the conspiracy theorists believe the department of veterans' affairs and scientific researchers are "in on it" as well?

According to its charter, the guiding principle for the work of the Committee shall be the premise that the fundamental goal of Gulf War-related government research is to improve the health of ill Gulf War veterans. Research priorities will be judged against this standard.

Although many potential causes have been considered, has any one specific cause or agent been shown to be more likely than the others?

The panel cited two Gulf War exposures consistently found to be causally associated with Gulf War illness: (1) the drug pyridostigmine bromide (PB), given to troops to protect against nerve gas, and (2) pesticides that were widely used, and often overused, during the Gulf War.

24
Was SIDS unheard of before "modern vaccine schedules"?
11
Are hepatitis B vaccines for newborns safe and cost-effective?
9
Is marijuana an effective medicine for any one of these medical conditions?
1
Does rifaximin (Xifaxin) treat irritable bowel syndrome?
5
Can marijuana cause seizures in children?
2
Were the Skripals attacked by use of Novichok?
30
Does Havana Syndrome exist?