Is the Indonesian army torturing and murdering civilians in West Papua? 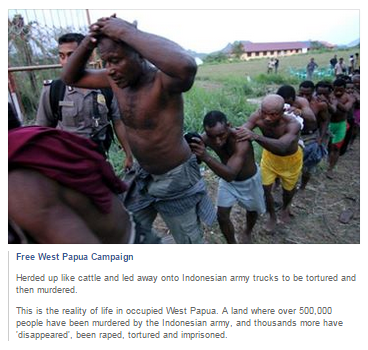 Herded up like cattle and led away onto Indonesian army trucks to be tortured and then murdered.

This is the reality of life in occupied West Papua. A land where over 500,000 people have been murdered by the Indonesian army, and thousands more have 'disappeared', been raped, tortured and imprisoned.

A paper prepared by the Yale Law School for the Indonesian Human Rights Campaign in 2004 found:

The Indonesian military and security forces have engaged in widespread violence and extrajudicial killings in West Papua.

It goes on saying:

They have subjected Papuan men and women to acts of torture, disappearance, rape, and sexual violence, thus causing serious bodily and mental harm.

It turns out this is a genocide, not just murder and rape:

the historical and contemporary evidence set out above strongly suggests that the Indonesian government has committed proscribed acts with the intent to destroy the West Papuans as such, in violation of the 1948 Convention on the Prevention and Punishment of the Crime of Genocide and the customary international law prohibition this Convention embodies.

A video published in 2010 on YouTube Report from Channel 4 News in the UK shows:

horrific torture of West Papuan civilians by the Indonesian military. 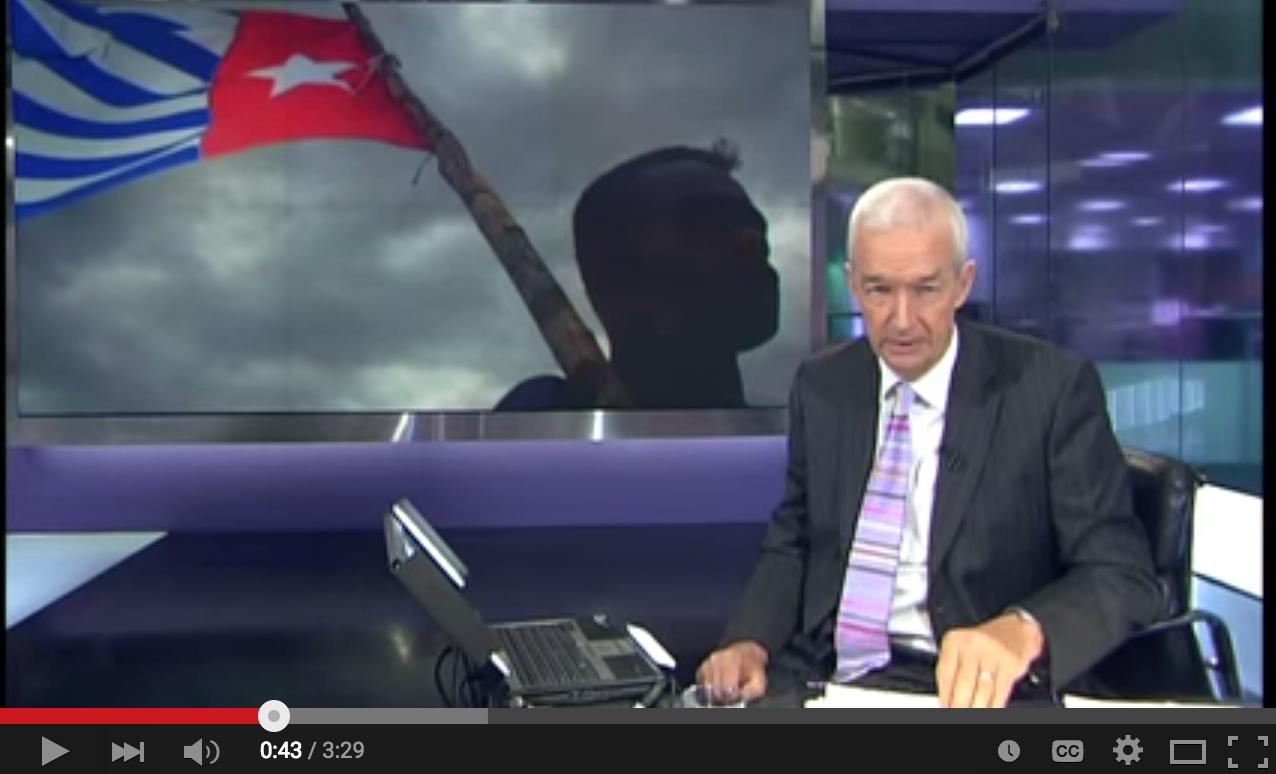 Warning: Disturbing footage and scenes there.

A public report to the U.N. Commission on Human Rights in 1999, the Special Rapporteur on Violence Against Women concluded that the Indonesian security forces used rape in West Papua:

as an instrument of torture and intimidation

torture of women detained by the Indonesian security forces was widespread.

The picture you see is referenced in http://freewestpapua.org/ as: 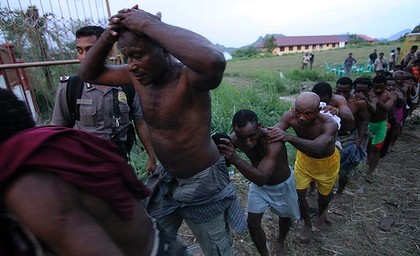 Apartheid in West Papua. Civilians are led away like slaves after being detained following a peaceful meeting. October 2011

Mr. Kalosil on the question of West Papua:

It is clear from many historical records that the Melanesian people of West Papua were the scapegoats of cold war politics and were sacrificed to gratify the appetite for natural resources which this country possesses.

How can we then ignore hundreds of thousands of West Papuans who have been brutally beaten and murdered? The people of West Papua are looking to the UN as a beacon for hope. It is time for the UN to move beyond its periphery and address and rectify some historical error.

Embassy of the Republic of Indonesia in London. (2009). Facts on Indonesia’s Sovereignty over Irian Jaya (Papua and West Papua Provinces). Retrieved from www.indonesianembassy.org.uk/papua/papua.html

Summary: Since 1963's withdrawal of the Dutch colonial administration, the Free Papua Movement (OPM) has conducted a low-level guerilla war against Indonesia, targeting its military and police, and kidnapping non-Papuan Indonesian settlers and foreigners

Indonesia has signed the 1998 UN Convention against Torture yet members of the Indonesian forces in West Papua continue to physically harm civilians in and outside of prisons, such as the 300 people beaten or tortured following a pro-independence Congress in October 2011.

Source: Franciscans International. (2012). Widespread incidence of torture in the provinces of Papua and West Papua in Indonesia. Retrieved from http://daccess-ddsny.un.org/doc/UNDOC/GEN/G12/106/20/PDF/G1210620.pdf?OpenElement

Documents almost all pieces of evidence showing that there has been a genocide against West Papua civilians. The document also argues that:

abuses reported as occurring in West Papua may be violations of international law and to international treaties and conventions by which Indonesia is bound.

Not the answer you're looking for? Browse other questions tagged war .

11
Did 2.5 million Americans serve in the Afghanistan and Iraq wars from 2001 to 2013?
4
Did the Free Syrian Army take a (pictured) toddler hostage?
7
Did birth defects in southern Iraq rise enormously after the US war against Iraq?
11
Did civilian fatalities in wartime climb from 5% in the 1900s to over 90% in the 1990s?
5
Were many Ukrainian and Polish women raped by Soviet soldiers during the WWII?
1
Were 900,000 US troops injured in Iraq and Afghanistan?
1
Does this photo depict the Sabra and Shatila massacre?
3
Were majority of those killed in the Sabra And Shatila Massacres women, children and the elderly?
10
Did Syrian army Pantsir systems destroy 23 Tomahawks (using just 25 missiles) in an attack on Damascus?