Did Switzerland declare a "Science day" in honour of Dr APJ Abdul Kalam? 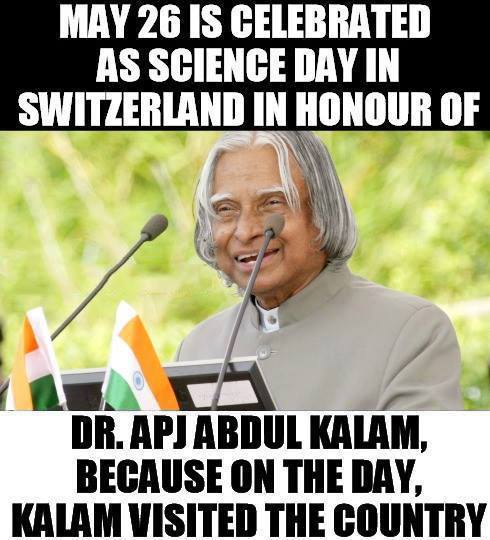 May 26 is celebrated as Science day in Switzerland in honour of Dr. APJ Abdul Kalam, because on that day, Kalam visited the country

Dr Kalam is an acclaimed scientist, and a former President of India.

I tried to Google for sources, and couldn't find any that were definitely not Indian in origin:

It doesn't look like it. Searching for "Kalam" on http://www.admin.ch (which purports to be the official site of the Swiss government) brings up one English result, "Indian President to visit Federal Institutes of Technology in Lausanne and Zurich". It is the press release for President Kalam's visit, dated 17 May 2005, nine days before the date in question. There is no mention of any "Science Day" in that article. Searching in French and German also returns one earlier, shorter press release (translated to each language), which also does not mention "Science Day". Searching the site for "science day" or "May 26" returns nothing. (Searching for "science" returns 250+ results, but since none of them mention Kalam, they are irrelevant.)

Furthermore, Science Day is not an official Swiss holiday. Per Wikipedia, there is only one federal holiday (i.e., declared by the Swiss national government): Swiss National Day, August 1. All other holidays are declared by the individual cantons. Wikipedia's list, which includes the holidays of the cantons, makes no mention of Science Day.

The claim is that Kalam visited CERN, so it might be asserted that the canton of Geneva, where CERN is located, declared the holiday (which would not be a Swiss holiday exactly, though it would still be true that it's celebrated in Switzerland); however, Geneva's own public holiday list has no mention of it. It seems unlikely that it would have been declared by one of the other cantons.

CERN has a list of official holidays, too. There is no Science Day, no mention of Kalam, no listing for May 26.

More circumstantial evidence is provided by TimeAndDate.com which has a list of all Swiss holidays and observances in 2005 and has no entry for March 26th.

The Swiss Broadcasting Corporation explictly declares the statement as False.

The Swiss Broadcasting Corporation is the Swiss public broadcasting association.

They maintain and publish stories on the website Swissinfo.ch.

The following story was published on 27 July 2016 titled Kalam, not Modi, was the real rock star. The story was written on the first anniversary of Kalam's death to recount his 2005 visit, which was apparently the first visit to Switzerland by an Indian head of state since 1970.

The story includes a portion regarding his visit to various science-related landmarks in Switzerland, including CERN, during the visit.

As a renowned scientist himself, Kalam visited almost of all of Switzerland’s science-related attractions. The physicist president first visited Albert Einstein’s former home in Bern. It was exactly 100 years ago in this modest apartment that Einstein churned out some of his most significant physics papers. A nice coincidence that did not escape Kalam’s attention.

“Your country has always been a great seat of learning and the fertile minds Switzerland has nurtured is testimony to these credentials,” he said in a speech.

He also visited the world’s largest particle physics laboratory, CERN, in Geneva as well as the federal institutes of technology in Zurich and Lausanne to get a glimpse of Swiss innovation.

However, the article makes clear mention of the claim and declares it to be false, while explicitly linking to the source OP provided from The Hindu

However, contrary to some reports in the Indian media, Switzerland did not declare May 26 as Science Day in honour of his visit.

"Science was a important theme during his visit but no such day was declared," a spokesperson for the Federal Department of Foreign Affairs told swissinfo.ch.

Dr. Kalam's state visit to Switzerland was originally planned for May 27-28, 2005. The original official media release (not available in English) emphasized a visit of the capital and the canton of Berne. It also mentioned visits to the Swiss Federal Institutes in Zurich and Lausanne during the president's stay, and referred to a more detailed program to be published later.

A second official media release did schedule the visits to the two Swiss Federal Institutes on May 26, "prior to his state visit to Switzerland". Dr. Kalam also visited CERN in Geneva on that day.

Possibly some spokesperson mentioned that May 26 would be an unofficial "science day" preceding the official, formal state visit. Indian newspaper articles might have misinterpreted such a statement as an official declaration. No Swiss sources, neither official nor in newspapers, can be found on a formal declaration for that day.

Not the answer you're looking for? Browse other questions tagged politics india switzerland .

74
Did Obama defy precedent by not visiting the D-Day monument?