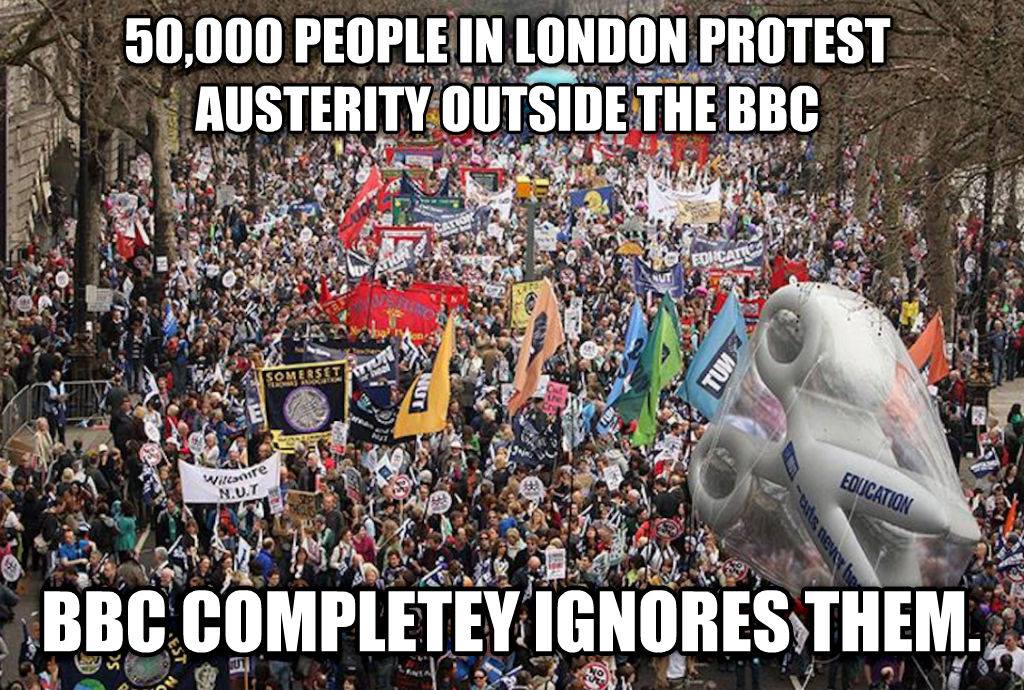 50,000 people in London protest austerity outside the BBC. BBC completely ignores them.

Facebook indicates that the meme was posted on June 22, 2014. The accompanying text read:

More than 50,000 anti-austerity protesters in London marched outside the BBC and Parliament Square today but the BBC refuses to cover them. SHARE this to break the media blackout!

Comedian Russell Brand addressed the crowd: "Austerity means keeping all the money among people who have loads of it. This is the biggest problem we face today--all other problems radiate from this toxic swindle. We can organise a fairer, more just society than they can. These demonstrations are the start."

Brand said the group will hold the biggest protest in British history later this year, "Soon we will reach a size and influence where neither the BBC nor this austerity Government will be able to ignore us."

Is there any truth this?

At the time the post was published, there was nothing on the BBC website about the protest, and no other BBC coverage anywhere except a few clips on the BBC 24hr News channel (see sources below). There were other media outlets which had covered the protest in their mainstream reporting (the Guardian, and ITV tea-time news are given as examples in one article).

There was, later, some limited BBC coverage:

It seems there was no coverage on regular BBC TV or radio news, and nothing on the national sections of the BBC news site.

This is based on the BBC's reply sent to many of the people who complained about the coverage of this protest, quoting unnamed "senior editorial staff at BBC News", an example of which can be read here, with a key part copied below:

They go on to acknowledge that this falls short of "extensive coverage":

We choose which stories we cover based on how newsworthy they are and what else is happening and we didn’t provide extensive coverage because of a number of bigger national and international news stories that day, including the escalating crisis in Iraq, British citizens fighting in Syria and the death of Gerry Conlon.

This is the BBC national news homepage as it was at midnight after the protests, to give some context as to what the competing stories were. It appears to contradict the BBC's statement - there's actually almost nothing about Iraq or Syria (just one story, low down, about a family's response to a Jihadi video, and a mention in an "in the news" roundup article). Source: 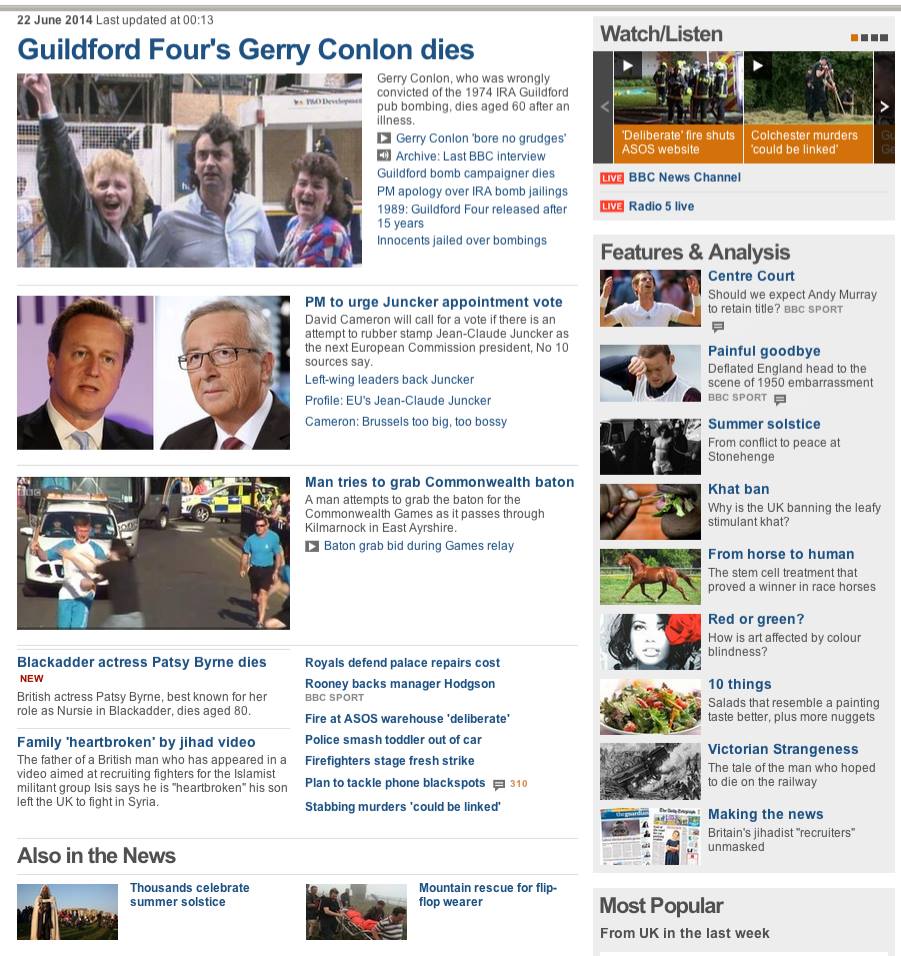 George Chalhoub's existing answer addresses the basic question of whether a protest happened recently, and whether it was ignored by the BBC.

I wish to address another implied claim in the meme image - that the image represents the ignored protest.

NO, that is NOT a photograph of a recent protest.

The image is of a protest in March 2011 - reportedly ten times the size - and has been appropriated from an article in The Guardian which attributes the photo to Dominic Lipinski/PA. (Twitter account) 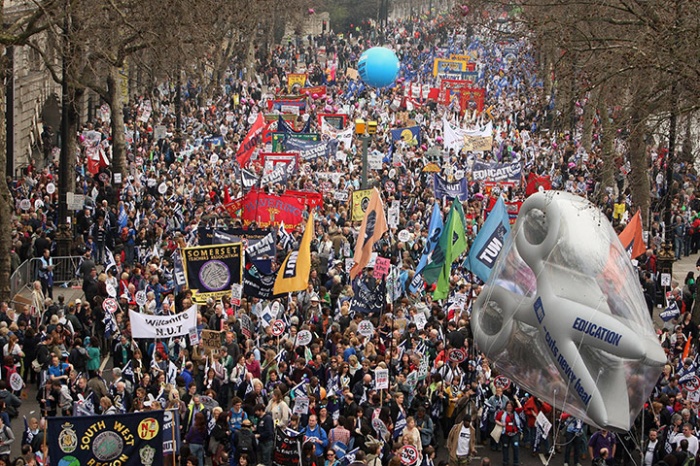 First, the protest happened and was reported on Saturday 21 June 2014 20.45 BST by theguardian.com in a news article called:

Tens of thousands march in London against coalition's austerity measures

It is estimated that 50,000 people were protesting:

An estimated 50,000 people in London addressed by speakers, including Russell Brand, after People's Assembly march

The protest was near BBC News Broadcasting House:

An estimated 50,000 people marched from the BBC's New Broadcasting House in central London to Westminster.

The protesting was against austerity:

It is essential for the welfare of millions of people that we stop austerity and halt this coalition government dead in its tracks before it does lasting damage to people's lives and our public services.

The real question here is: Was this event completely ignored by BCC News Broadcasting?

No, it didn't. BBC News Online posting this article and video; adding "no commentary" on the video: 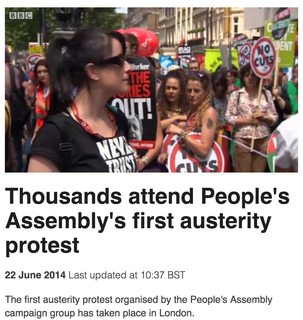 Therefore, saying that BBC completely ignored the protest is wrong.

Not the answer you're looking for? Browse other questions tagged media activism .

14
Did Roger Ailes say "the truth is whatever people will believe" or something substantially similar?
9
Did BBC change an article title about Israelis shooting dead a Palestinian in a hospital?
7
Did the BBC alter an interviewee's words to use the term 'chemical attack'?