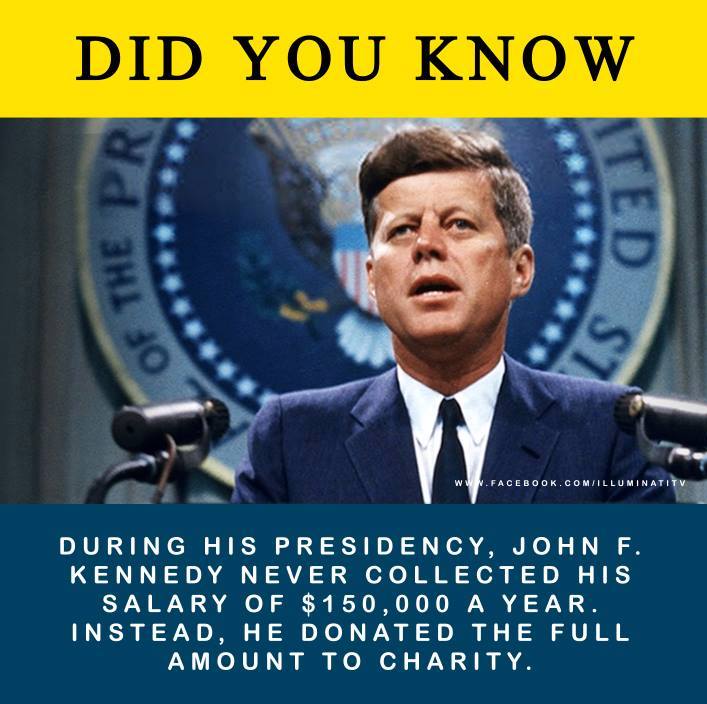 During his presidency, John F. Kennedy never collected his salary of $150,000 a year. Instead, he donated the full amount to charity.

Initial googling seems to support his charity, but that amount seems to me like a rather high salary for the 1960s.

As DavePhD pointed out, that $50,000 could only be spent on presidential business, so the full amount that JFK could donate from his presidential salary was 100,000 minus taxes.

The History Channel backs up the claim that he donated his full presidential income:

6. He donated his congressional and presidential salaries to charity.

Kennedy’s father built a family fortune, and when the young politician entered Congress in 1947, he earned sufficiently ample annual income from trusts established by his father that he decided to donate his entire legislative salary to various charities. Kennedy quietly maintained the practice as president after becoming the richest man to ever take the oath of office.

As The History Channel isn't focused on facts anymore, here's a list of supporting book quotes from this page:

"A millionaire by age twenty-one, Kennedy was our wealthiest President. The only President besides George Washington to decline his salary, he donated his to the Boy Scouts and Girl Scouts, the United Negro College Fund and Jewish organizations." From: Page 67 "Lives of the Presidents: Fame, Shame (and What the Neighbors Thought)" by Kathleen Krull, read using the "search inside" feature at Amazon.com: http://www.amazon.com/exec/obidos/tg/detail/-/015200808X/

"His $100,000 salary as President was being divided, after taxes, among two dozen charities, including the Boy Scouts and Girl Scouts of America, the United Negro College Fund, and the Federation of Jewish Philanthropies. The schedule of contributions was worked out each year during a short money meeting Kennedy had with a family accountant named Thomas Walsh." From: Page 428 "PRESIDENT KENNEDY: PROFILE OF POWER" by Richard Reeves, read using the "search inside" feature at Amazon.com: http://www.amazon.com/exec/obidos/tg/detail/-/0671892894/

"He donated his entire presidential salary of $100,000 to charity, ranging from hospitals to the Boy and Girl Scouts, to Jewish philanthropies and retarded children's associations. In 1962, however, he chose to make what were clearly strategically political contributions with his private funds?the United Negro College Fund and the Cuban Families Committee." From: Page 95 "The Kennedy White House : Family Life and Pictures, 1961-1963" by Carl Sferrazza Anthony, read using the "search inside" feature at Amazon.com: http://www.amazon.com/exec/obidos/tg/detail/-/0743214730/

JFK's Net Worth and Context

Missing from this is context. JFK was a billionaire. He was the second richest president of the USA ever (after Trump). According to Fortune, JFK's dad Joseph, was 9-16th richest person in America in 1957. From Wikpedia,

It's not all that different from Trump himself. From the same source above, Motley Fool, Trump is worth four times as much as Kennedy but has also promised and thus far donated his presidential salary. Outside of the presidency, and the small charitable contribution, it's not all that much different from Steve Jobs who made the choice to work for $1/year. Presidents and CEOs receive other benefits than merely a payroll salary (like stock options, fame, and power).

At some point, giving away the peanuts is simply worth the positive publicity, and if we keep it about material wealth and not about it being symbolically his "salary" the claim is pretty meek. With a Net Worth of 200-400 million, we're essentially saying, presidential candidate promises to give 0.125% - 0.25% of his Net Worth if elected over four years.

14
Do astroturfing campaigns target news sites and political discussion boards?
12
Were terror attacks proposed to gain political support for a war against Cuba?
6
In 1982 did then President Ronald Reagan send a letter to an 8-year-old kid congratulating him on getting a Pac-Man high score?
17
Did a senior U.S. Justice Department official state that 3- and 4-year-olds can learn immigration law well enough to represent themselves in court?
7
Did Oliver Kahn deny children's penalty goals and thus, charity money?
8
Did COVID-19 kill ~5 times more people per capita in Jun-Aug 2021 in US counties that >70% voted for Trump than in those which voted <26-32% Trump?