Is this tweet about classes one month after the Hiroshima bombing, and the 2011 tsunami accurate? 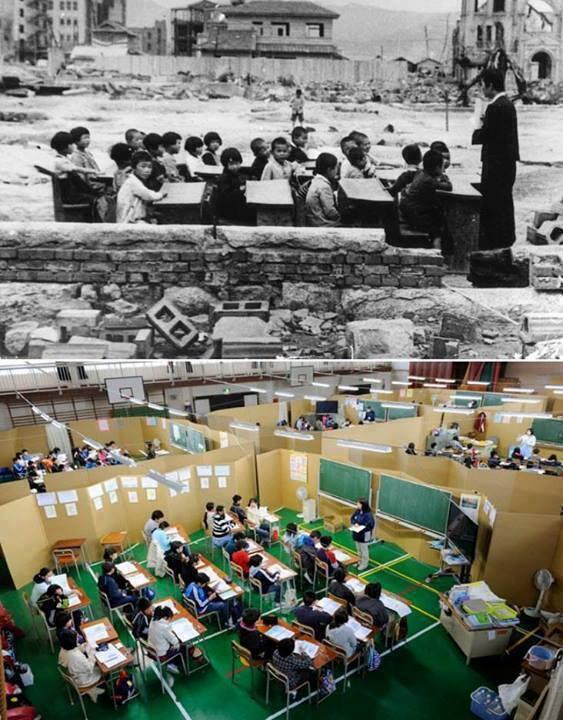 Are the images genuine, and stemming from the events mentioned?

The first image can be seen at the Hiroshima Peace Media Center, in an article titled "Hiroshima: 70 Years After the A-bombing: Students study in open-air classrooms in “A-bomb desert”".

If you click on the first image, you get the following caption:

An open-air classroom at Noboricho National School. A female teacher stands in front of the students. The boy in the center of the third row, gazing at the camera, is Kengo Kurata. Far left is Fukuya department store, and far right is Hiroshima Nagarekawa Methodist Church. This photo was taken by Stephen Kelen, a war correspondent, between April and May 1946. (Mr. Kelen died in 2003 at the age of 91.) (Courtesy of the Hiroshima Municipal Archives)

This was not an isolated incident. From the Hiroshima Peace Memorial Museum Open-air Classrooms

In the shade of trees and out in the blazing sun, teachers and students could be seen diligently studying in classrooms made by placing the few surviving desks and chairs on straw mats on the ground. Open-air classrooms were common at many schools after the A-bombing, but they were not the pleasant break from regular classes we know today. The scene surrounding the students was utter devastation---the charred A-bomb desert punctuated here and there by the shells of ferro-concrete buildings.

The second photo can be seen in the Reuters article Japan makes no-go nuclear zone, PM faces more criticism, and was taken a month and a bit after the earthquake and tsunami in 2011

To summarise, both images are genuine, and depict the aftermath of the two disasters mentioned in the tweet. The first photo was several months, rather than one month after the atomic bombing, but is still a remarkable photo.

Not the answer you're looking for? Browse other questions tagged education japan world-war-ii nuclear-weapons hiroshima-nagasaki .

3
Did Muhammad behead 600 Jews in one day and torture unbelievers?
1
Did Democrats protest lack of vote on a bill that ACLU argued as "undermining civil liberties"?

44
Is Fukushima reactor No. 4 on the verge of catastrophic failure that will destroy the world?
15
Were "comfort women" well-paid?
10
Did Hiroshima change the layout of its streets subsequent to the war?
24
Did a man from a non-existent country, Taured, appear in a Japanese airport in 1954, and then disappear?
5
Did a lack of Muslims in Japan help prevent a 2002 AQ terrorist attack?
9
Were the Dene people unaware they had mined ore for the atomic bombing of Hiroshima and Nagasaki until the 1990s?
5
Were many Ukrainian and Polish women raped by Soviet soldiers during the WWII?
44
Did Oppenheimer quote the Bhagavad Gita after the Trinity test?