Will visiting a sauna help you quit smoking?

Floating around the introwebs, thought it was pure nonsense. Can anyone back me up here? 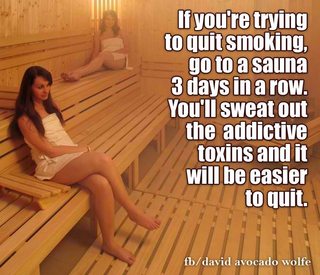 If you're trying to quit smoking, go to a sauna 3 days in a row. You'll sweat out the addictive toxins and it will be easier to quit.

tl;dr Going to a sauna does not speed up removing toxins from the body caused by smoking.

According to the American Cancer Society:

Many other sources say nicotine remains in your body for 3 days. This quote with up to 4 days is one of the higher estimates.

So technically, going to a sauna for 3 days and not smoking will rid the toxins, such as nicotine and cotinine from your body. However, going swimming in a sewer or watching TV will do the same thing as long as you are not smoking.

When denied the substance that one is addicted to, one may feel some amount of physical withdrawal. There's nothing that a regular smoker needs to do, e.g. using a sauna, to rid the body of nicotine. Stop smoking cigarettes, and the nicotine is quickly metabolized out of your body. That's when you experience some physical discomfort, such as crankiness, maybe shakiness and increased appetite. You'll feel cravings for nicotine, which will eventually go away if you don't smoke cigarettes. Using a sauna doesn't make the process of withdrawing quicker:

By forcing your body to perspire through heat exposure... you can cause your kidneys to save water and actually hang on to any toxins that may be circulating in your system.

The same myth is cited for heroin and occasionally caffeine, that "sweating out the toxins" will make the withdrawal process easier. Your body naturally metabolizes these substances just fine. It is the absence of having them in your body, when you are accustomed to having a constant blood level, that causes discomfort. The process of withdrawal and recovery can't be accelerated by using a sauna, or by sweating:

Steam rooms and sweat lodges can be warm and relaxing — but are they cleansing? Contrary to popular belief, there is no scientific basis for the idea that people can "sweat out" toxins or impurities from the body.

This myth may or may not have originated from Scientology in the early 1970s, but Scientology certainly perpetuated it. Carnegie Mellon University has an entire website devoted to L. Ron Hubbard's junk science, with a section about the pseudoscience of sweating out toxins.

The Purification Rundown and New Life Detoxification Program both rely on the same fundamental principle - that the body can be purified of toxins stored in body fat, by flushing out the toxins and excreting them from the skin. The first element of the programme, running, is intended to "get the blood circulating deeper into the tissues where toxic residuals are lodged and thus act to loosen and release the accumulated harmful deposits and get them moving." Immediately afterwards, four or five hours of sauna time is used to "flush out the accumulations which have now been dislodged", with the toxins sweated out through the skin... This, however, falls foul of the problem that sweating simply is not a major route for excreting toxins. Most abused drugs are eliminated from the body by detoxification through the liver, the kidney, or occasionally the lungs. Even if Hubbard's therapy did manage to flush toxins out of fat tissue and into the bloodstream, they would pass through the kidneys and so be excreted in urine. They would have no chance to enter the sweat glands en masse.

Hubbard claimed that drugs were stored as residual in human fat, i.e. that they are fat-soluble. The problem with this claim is that all drugs are not fat soluble.

Not the answer you're looking for? Browse other questions tagged smoking .

28
Is smoking hookah safer than smoking cigarettes?
9
Does smoking under three cigarettes a day prevent addiction?
11
Do plain packs for cigarettes reduce smoking?
6
Does smoking tobacco increase work capacity?
16
Do smoking-related deaths save cost to health service?
19
Is 1 hour of shisha as harmful as smoking 100 cigarettes?