Have 95% of climate models over-forecast the global warming trend? [duplicate]

"It's a well-kept secret, but 95 per cent of the climate models we are told prove the link between human CO₂ emissions and catastrophic global warming have been found, after nearly two decades of temperature stasis, to be in error ... This is not about facts or logic. It's about a new world order under the control of the UN."

This appears to have been sourced from a report reported in the conservative news source, Daily Caller:

Is there any basis for concluding that anywhere around 95% of climate models have been found to be in error in the way Spencer suggests?

The simple answer to this question is yes.

But the debate has been significantly obscured because the majority of contributors to it have chosen what appear to be poor ways of testing the claim with actual data (which is not, in principle, hard as the key data from models and observations are accessible). 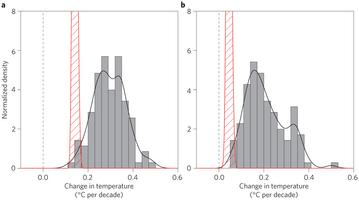 The choice made by these authors is to compare just the average extent of warming over a period rather than the noisy time series. This appears to avoid some of the choices that make the time series comparison so obfuscating and controversial. Their result seems to show that most models really do overestimate the actual amount of warming over recent years. In their words:

Not the answer you're looking for? Browse other questions tagged climate-change united-nations .

149
Do human activities contribute to climate change?
31
Does this graph show climate-change predictions don't meet observations?
20
Have global surface temperatures not shown significant warming since the late 1990s?
7
Have climate models in the 80's and 90's accurately predicted today's climate?

26
Does CO₂ cause Global Warming?
28
Did "global cooling" have as much scientific consensus as "global warming" has now?
9
Do the recent CLOUD results have significant implications for global warming?
4
Global warming and mild winters
20
Have global surface temperatures not shown significant warming since the late 1990s?
22
Does unadjusted NASA climate data show no long-term global warming?
25
Will global warming reduce available oxygen?
48
Does the logarithmic nature of global warming invalidate climate change claims?