If someone dies during a test, does everyone else pass? [closed]

This picture has been making the rounds on Twitter today. 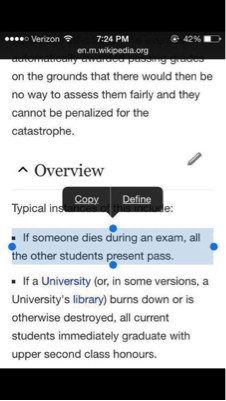 Judging off the second bullet point, I assume that the tests being talked about are ones that are given in college. Is it true that, if someone dies during a test, everyone else present passes?

Also, the second bullet point states that, should a university (or its library) be destroyed, all current students graduate with honors. Is this claim true?

Pass by catastrophe refers to any number of popular urban legends in academia claiming that if some particular catastrophic event occurs, students whose performance could have been affected by the event are automatically awarded passing grades [...]

There are are no references in the article supporting the claim that this is an urban legend, let alone the claim that pass by catastrophe is a policy at any university.

I've sampled the examination policies of several institutions and have failed to find a "pass by catastrophe" clause in any of them:

At Harvard, a bomb threat caused exams to be "cancelled, with grading and rescheduling options varying for each course". (Final Exams Cancelled, Postponed, and, In Some Cases, Continued Anyway Amid Bomb Scare. The Harvard Crimson. December 16, 2013)

[Some students] had the option of taking the exam at a rescheduled time this week or at the start of next semester, or not taking the exam at all and accepting their current grade. For its part, LS1a required students in the evacuated Emerson Hall exam sitting to make up their missed exams Monday evening or in early spring.

The Monday afternoon blaze damaged steam boilers and generators used to heat most campus buildings, so the university was forced to postpone exams and send students to alternate accommodation.

Not the answer you're looking for? Browse other questions tagged university .