Are there more open jobs than available developers?

With nearly five open jobs for every available software developer, the need for qualified technical talent is higher than ever.

I have seen this claim repeated many times, with different numbers cited, but I've not been able to get down to any underlying factual source for these claims. In this case, the article links to another non-authoritative press article about agile developers.

united-states economics software
Share
Improve this question
edited May 6 '15 at 15:37

A report which was issued by the Economic Policy Institute in 2013, analyzed the science, technology, engineering, and mathematics (STEM) labor market and workforce and the supply of high-skill temporary foreign workers, who serve as “guestworkers.” A programmer (or a software developer) is indeed in the core of this market.

Their research proved that colleges are already producing far more graduates than the STEM market is absorbing on and concluded:

In our research we find that there is no lack of domestic graduates or existing domestic STEM workers to fill available STEM jobs.

But it turns out that the job gap and growth opportunity is in computer science, not in STEM. 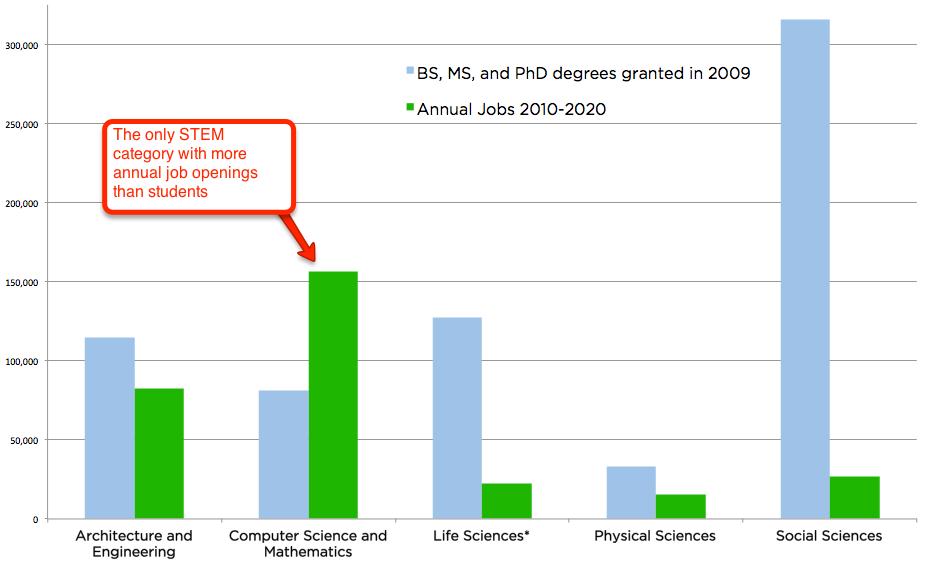 Despite all of the excitement STEM, it turns out that when you exclude computer science from STEM, you see that the remaining STEM fields have too many students, and not enough jobs. 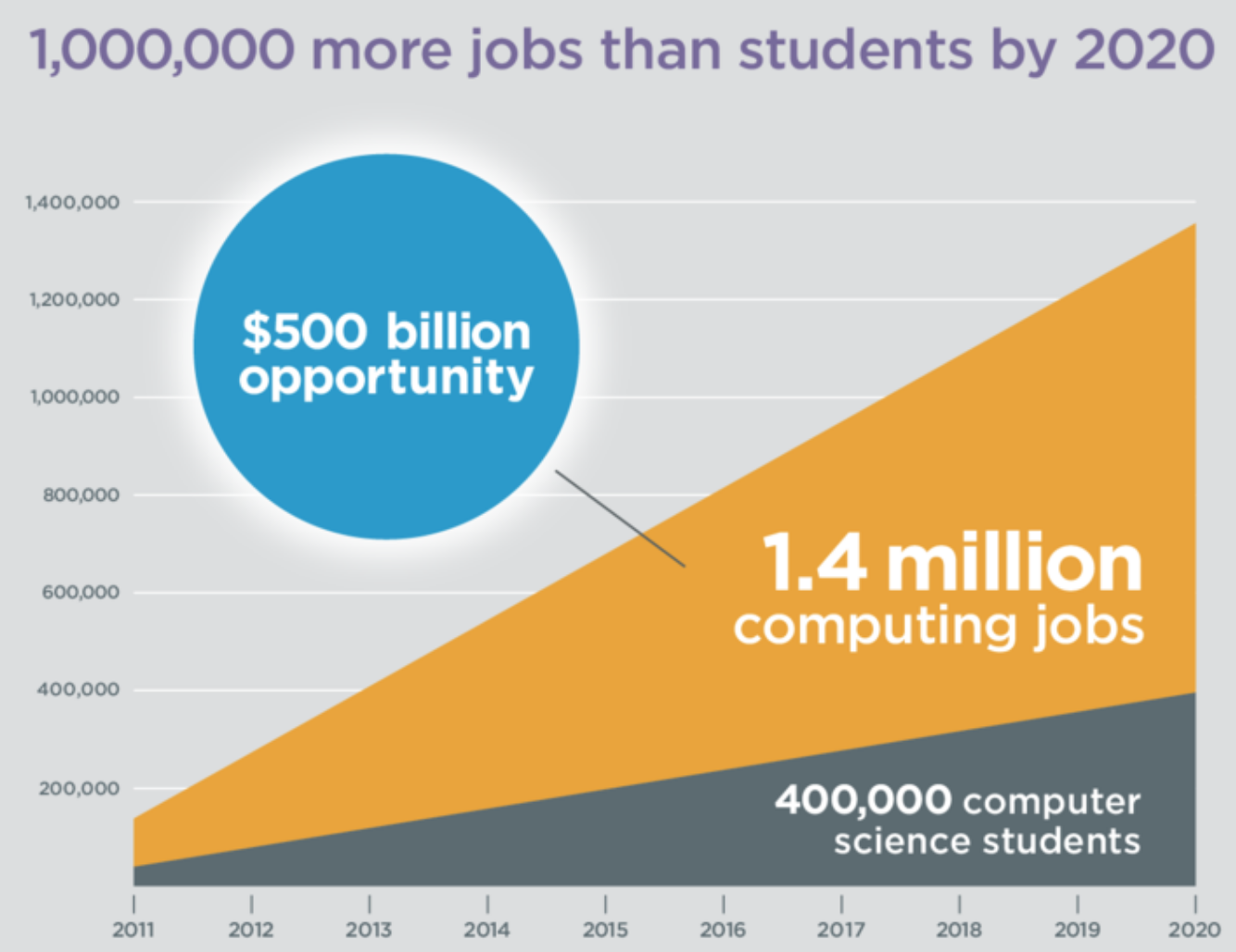 Furthermore, there The Job/Student gap in Computer Science seems to be real:

The source for the job data comes from the Bureau of Labor Statistics, http://www.bls.gov/. Projections for job openings and replacements in computing jobs is 1,366,200 jobs from 2010 - 2020. Projections for all other STEM jobs combined (engineering, life sciences, physical sciences, social sciences) is 908,700 jobs over the same period. This is a 60:40 ratio of jobs in Computing vs the rest of STEM. The source for the students data comes from the College Board, surveying 2012 AP examination participation (see http://research.collegeboard.org/programs/ap/data/participation/2013), shows that of the 1,379,585 AP math and science exams taken by US high school students in 2013, only 29,555 were computer science exams. This is a 2:98 ratio of students in computer science vs the rest of STEM

But this is all one slice of the puzzle. That is, because almost half of developers don't have a degree in computer science, a survey by StackOverFlow says: 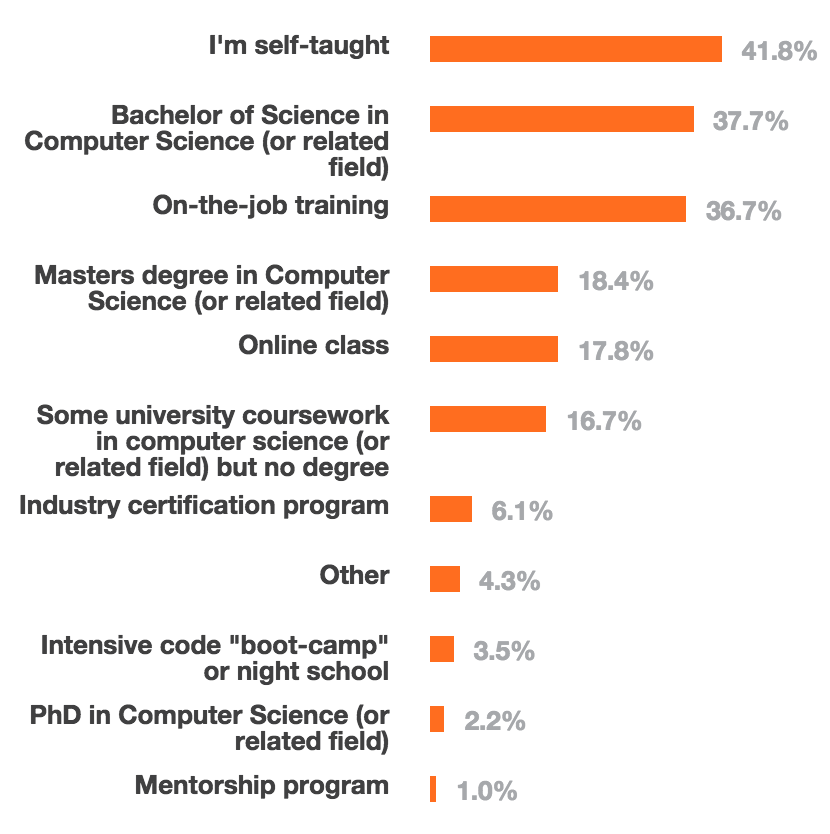 48% of respondents never received a degree in computer science

The issue is mostly raised in the context of tech talent being brought to US on H1B visas. They are good proxy for showing how many openings are there, as the companies struggling to find talent on local market, would search abroad.

The H1B visa is intended to allow high-skilled workers to come to the U.S. for three years with a three-year extension. While there is currently an annual cap of 65,000 new worker visas that can be issued, each year companies’ requests often far exceed this cap within days after the application opens on April 1. (As of April 7, 2014, 172,500 H1B petitions were received by U.S. Citizenship and Immigration Services.)

In 2013 businesses made 909,465 certified requests for H1B visas. Table 1 on the left shows that the top 10 demanded H1B occupations were in either computer technology or finance, representing 77 percent of the total, or 700,000. The rest were in fields that ranged from medical professionals and scientists to teachers and business administration analysts.

It's safe assumption to make, that number of open positions is at least as big as number of requests for H1B visa. Request can only be made once candidate is actually offered the job.

Another good indicator, that H1B correlate to shortage of tech talent is the fact that in years following the dot-com crash of 2001, the numbers used dropped significantly, as the local talent became available. 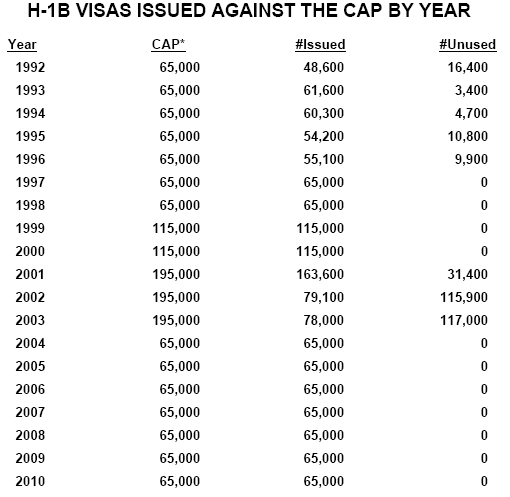 Of course the counter-argument is, that there isn't any shortage and companies only bring in foreigners to pay them less than American talent. This is false, as part of H1B visa process is getting approval for Labor Condition Application (LCA) from the Department of Labor. Two significant preconditions to falsify that thesis are:

In fact, a 2013 study has found that H1b-ers are paid on average more than native US workers:

Another set of counter arguments is that if there was shortage, then why don't wages increase and unemployment decrease?

These arguments also fail the fact check. According to data from Dice, just in 2012 alone the salaries grew 5.3% YtY, way above national average. Unemployment among software developers was 3.8%, less than half of national average.

I think there's a very large variation in estimates. Even from BLS itself. Compare the accepted answer with the more recent BLS data from a 2017 NYT article which show near parity for the 2014-2024 projections between job opening and US degrees in CS: 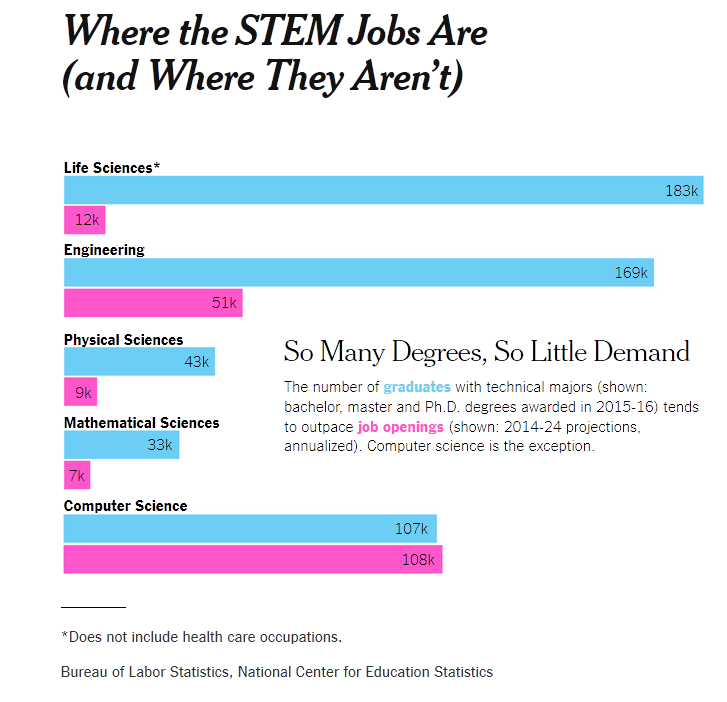 While using BLS data, the above analysis was performed by Edward Lazowska, a professor of computer science at the University of Washington.

Furthermore, graduating with CS/IT degree is nowhere near a guarantee for a job as one might incorrectly infer from the graph above. For instance, in the same NYT source, we read that:

This somewhat jibes with the EPI report (which I myself) found pretty questionable in its inferences as it uses exactly one year (2009) as sample, but the findings of which, as pertaining to CS/IT, were eschewed in the accepted answer:

So deficit of jobs and surplus of graduates in IT/CS? Skills mismatch? Hmm...

And if I'm allowed some related thoughts, although the question was tagged with US, the situation that CS/IT graduates fare better than the STEM average in finding a job in their field of study doesn't seem to hold in other Anglophone countries; e.g. in Australia. So frankly any inferences based on US data of a global shortage of developers seems even more tenuous.

And frankly taking the linear extrapolation used in the accepted answer to forecast millions of unfulfilled IT jobs is ridiculous, as the EU has found out:

“This skills mismatch is detrimental to our economic and social policy objectives,” added the text, signed off by all of the EU's government leaders, who promised action.

But in reality, the number of unfulfilled potential jobs in the ICT sector remained more or less the same in the following years, at around a third of the expected figure.

Even assuming these gaps are real, they're not necessarily increasing, but showing some hard-to-predict variation: 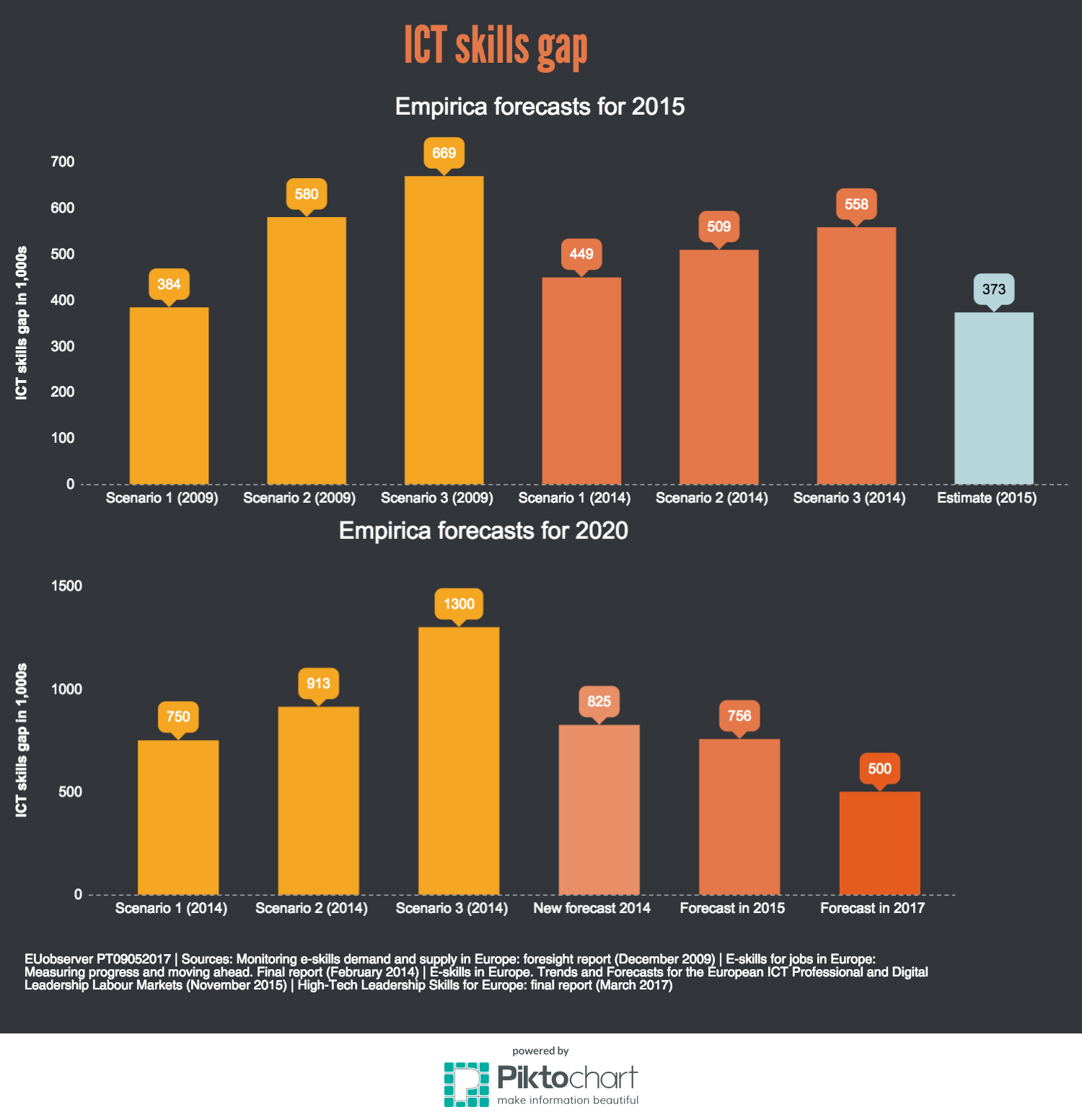 In its reports, Empirica offered estimates based on different scenarios, but it was not uncommon for commissioner Ansip's predecessor for the digital agenda, Neelie Kroes, to take the highest figure, saying that “Europe faces an ICT skills gap of nearly one million workers”, without mentioning a year or any caveats.

The researchers had also stressed that what they calculated was a “demand potential” or “job potential”, not actual expected vacancies.

“It should be seen as a (theoretical) figure describing the demand potential for new ICT jobs which ... could theoretically and additionally be created in Europe due to an e-skills demand likely to occur especially in the years closer to 2020,” the researchers wrote in 2014.

“Vacancies that cannot be filled year after year will go away – projects cannot be realised, tenders not submitted, innovations will simply not be made”, they added.

And to conclude my skepticism by coming back to the US, a 2017 Forrester report, as summarized in TechRepublic said that the purported unfulfiled jobs didn't translate in a substantial compensation increase, the widely accepted measure of such gaps:

Even high-demand tech roles have seen limited wage increases, the report found. Applications developers, security specialists, and other coveted positions have seen annual average job growth rates exceeding 7% over the last five years, while professions related to management and analysis of tech systems have grown at CAGRs about 3%. However, the wages for all of these roles have only growth around 3%, which suggests an efficient labor market, the report noted.

Further, over the past four years, the number of students graduating with degrees and diplomas in computer science has grown faster than the number of new tech jobs. "This suggests that any tech talent shortage is getting better — not worse — from a training and development standpoint," the report stated.

Not the answer you're looking for? Browse other questions tagged united-states economics software .

24
Does the H-1B visa program cause a net decrease in the employment prospects of skilled U.S. job applicants in STEM fields?
4
Only half of students graduating with a STEM degree [in 2009] were able to find STEM jobs [then]

156
Is closed-source code more secure than open-source?
28
Are there more Greeks driving Porsche Cayennes than paying high-rate tax?
17
Are there more guns in America than people?
6
How many new jobs are needed per month for job creation?
31
Are there 24 empty houses "available" per homeless person in the USA?
9
Are there more tigers in private ownership in the US than there are in the wild?
4
Are there more trees in America today than there were during colonial times?
7
Almost all the US jobs created between 2005-2015 "are temporary" (alt-work)