Was Monsanto the primary manufacturer of Agent Orange? 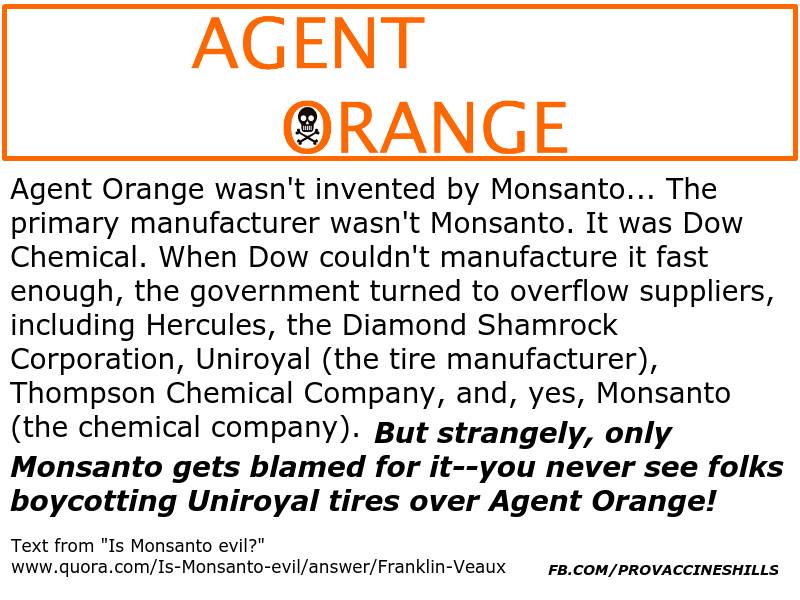 Agent Orange wasn't invented by Monsanto... The primary manufacturer wasn't Monsanto. It was Dow Chemical. When Dow couldn't manufacture it fast enough, the government turned to overflow suppliers, including Hercules, the Diamond Shamrock Corporation, Uniroyal (the tire manufacturer), Thompson Chemical Company, and, yes, Monsanto (the chemical company). **But strangely, only Monsanto gets blamed for it -- you never see folks boycotting Uniroyal tires over Agent Orange!

Text from "Is Monsanto evil?" www.quora.com/Is-Monsanto-evil/answer/Franklin-Veaux

In the 1960s and 1970s, Monsanto was one of the most important producers of Agent Orange for United States Armed Forces operations in Vietnam.

The amounts of agent orange, in units of 55-gallon (208 liter) drums by company is as follows:

The book also repeats this data in table 5.6 (page 173), breaking it down by fiscal year. For the first two years, 1963 and 1964, Monsanto was the only supplier. The statement in the OP "When Dow couldn't manufacture it fast enough, the government turned to overflow suppliers" is thusly untrue. In 1965, Dow and Hercules joined Monsanto in the production effort. The other companies started still latter.

While Dow produced more Agent Orange, it produced agent orange with a lower concentration of dioxin contamination. The same book provides data in table 5.11 (page 183), for each of the top 5 producers, broken down by year.

So there was vast variance in the concentration of the toxic substance, dioxin.

In 1984, several companies that manufactured agent orange reached a settlement with veterans who had sued for damages due to agent orange exposure.

The companies involved and percent payment was as follows:

The percentages being "according to a formula based on the amount of Agent Orange each firm produced and how much the substance was contaminated with dioxin".

The above data and quote is from Spartanburg Herald-Journal 13 May 1984 page A5.

In conclusion, Dow produced more agent orange than any other company, Monsanto being a close second. Monsanto settled for the most liability, based upon a formula that also considered how contaminated each company's agent orange was with dioxin.

Not the answer you're looking for? Browse other questions tagged war monsanto .

26
Was 19 the average age of a combat soldier in Vietnam?
7
Was slavery the principal cause of the American Civil War?
4
Does the Millennium Challenge Compact require El Salvador to use Monsanto seeds?
10
Was the video about MH17 done the day before it crashed?
2
Did the House of Commons Foreign Affairs Committee's report say NATO's intervention in Libya was based on "lies"?
6
Did Monsanto say that Agent Orange doesn't cause serious long-term health effects?
7
Was the death rate in Boer War concentration camps the same as in Glasgow?
13
Was the first German bombing of London an accident?