Did Freeman Dyson say that atoms have awareness?

Dawkins: By processes which are well understood in biology and science.

Chopra: Is it randomness or intelligence?

Chopra: All of that are expressions of awareness as consciousness and influence everything that we experience in life.

Dawkins: You think a single cell has that?

Chopra: A single cell has a form of awareness.

Dawkins: Do you think an atom has that?

Chopra: According to Freeman Dyson yes.

Chopra: Yes sir! Check it out.

Dawkins: If Freeman Dyson ever said that atoms are aware then he's wrong, I don't think he said it, I think he should sue you.

Freeman Dyson is a notable and retired theoretical physicist and mathematician, known for his work in quantum electrodynamics, solid-state physics, astronomy and nuclear engineering.

Did Freeman Dyson ever say that atoms have awareness?

Yes, he might have suggested something that could be interpreted along those lines. But it becomes largely a question of semantics of what Dyson means by "mind".

Quoting from p.249 of Dyson's 1979 autobiography, Disturbing the Universe

It is remarkable that mind enters into our awareness of nature on two separate levels. At the highest level, the level of human consciousness, our minds are somehow directly aware of the complicated flow of electrical and chemical patterns in our brains. At the lowest level, the level of single atoms and electrons, the mind of an observer is again involved in the description of events. Between lies the level of molecular biology, where mechanical models are adequate and mind appears to be irrelevant. But I, as a physicist, cannot help suspecting that there is a logical connection between the two ways in which mind appears in my universe. I cannot help thinking that our awareness of our own brains has something to do with the process which we call "observation" in atomic physics. That is to say, I think our consciousness is not just a passive epiphenomenon carried along by the chemical events in our brains, but is an active agent forcing the molecular complexes to make choices between one quantum state and another. In other words, mind is already inherent in every electron, and the processes of human consciousness differ only in degree but not in kind from the processes of choice between quantum states which we call "chance" when they are made by electrons.

Whether Dyson is suggesting that each atom or electron is "aware" or if chance is (conscious) choice is subject to interpretation. His use of "mind" is in the following context:

When we are dealing with things as small as atoms and electrons, the observer or experimenter cannot be excluded from the description of nature. In this domain, Monod's dogma, "The cornerstone of the scientific method is the postulate that nature is objective," turns out to be untrue.

If we deny Monod's postulate, this does not mean that we deny the achievements of molecular biology or support the doctrines of Bishop Wilberforce. We are not saying that chance and the mechanical rearrangement of molecules cannot turn ape into man. We are saying only that if as physicists we try to observe in the finest detail the behavior of a single molecule, the meaning of the words "chance" and "mechanical" will depend upon the way we make our observations. The laws of subatomic physics cannot even be formulated without some reference to the observer. "Chance" cannot be defined except as a measure of the observer's ignorance of the future. The laws leave a place for mind in the description of every molecule.

He later ties this in with the question of the existence of God:

We had earlier found two levels on which mind manifests itself in the description of nature. On the level of subatomic physics, the observer is inextricably involved in the definition of the objects of his observations. On the level of direct human experience, we are aware of our own minds, and we find it convenient to believe that other human beings and animals have minds not altogether unlike our own. Now we have found a third level to add to these two. The peculiar harmony between the structure of the universe and the needs of life and intelligence is a third manifestation of the importance of mind in the scheme of things. This is as far as we can go as scientists. We have evidence that mind is important on three levels. We have no evidence for any deeper unifying hypothesis that would tie these three levels together. As individuals, some of us may be willing to go further. Some of us may be willing to entertain the hypothesis that there exists a universal mind or world soul which underlies the manifestations of mind that we observe. If we take this hypothesis seriously, we are, according to Monod's definition, animists. The existence of a world soul is a question that belongs to religion and not to science.

He appears to have also remarked on "three levels of mind" in his 1988 book, Infinite in all directions. Quoting from Dyson's Wikipedia page,

Dyson has suggested a kind of cosmic metaphysics of mind. In his book Infinite in All Directions he writes about three levels of mind: "The universe shows evidence of the operations of mind on three levels. The first level is the level of elementary physical processes in quantum mechanics. Matter in quantum mechanics is [...] constantly making choices between alternative possibilities according to probabilistic laws. [...] The second level at which we detect the operations of mind is the level of direct human experience. [...] [I]t is reasonable to believe in the existence of a third level of mind, a mental component of the universe. If we believe in this mental component and call it God, then we can say that we are small pieces of God's mental apparatus" (p. 297).

As his autobiography's jacket proclaims below, such statements won Dyson a Templeton Prize in 2000. 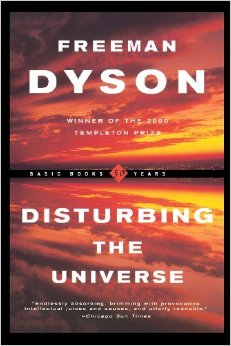 9
Did Ralph Nader say that a pound of plutonium could cause 8 billion cancers?
10
Did Nietzsche ever state “The world is beautiful, but has a disease called man”?
2
Did Jonas Salk say "I have had dreams and I have had nightmares", etc.? Where?
17
Is "If you have nothing to hide, you have nothing to fear" a line used by Joseph Goebbels?
2
Did Ariel Sharon say that the Jewish people control America?
4
Did Richard Nixon say, "Jews think they can run the world"?
5
Did Morgan Freeman say "Oppression is being told you can't say certain words because you will offend someone else"?
6
Did Abraham Isaac Kook say that Gentiles have different souls than Jews?
8
Did Einstein say: "I'm doing just fine, considering that I have triumphantly survived Nazism and two wives"
8
Did Alain Finkielkraut say that "the left no longer has ideas, only enemies"?