Is there any archaeological evidence for Norman Invasion of Britain in 1066?

This article by Joshua Berman claims that "The Anglo-Saxon conquest of Britain in the 5th century, the Arab conquest of Palestine in the 7th century, even the Norman invasion of England in 1066: all have left scant if any archaeological remains".

Is there any archaeological evidence corroborating the Norman Invasion of 1066?

The Tower of London:

Her Majesty's Royal Palace and Fortress, known as the Tower of London, is a historic castle located on the north bank of the River Thames in central London. [...] It was founded towards the end of 1066 as part of the Norman Conquest of England. The White Tower, which gives the entire castle its name, was built by William the Conqueror in 1078, and was a resented symbol of oppression, inflicted upon London by the new ruling elite.

Here's a picture of the White Tower, 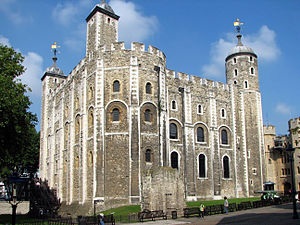 The main building material is Kentish rag-stone, though some local mudstone was also used. Although little of it survives, Caen stone was imported from northern France to provide details in the Tower's facing, much of it replaced by Portland stone in the 17th and 18th centuries under the direction of architect Inigo Jones.

Of course there's a lot more: Norman architecture in Britain; coins, minted by William the Conqueror; the Domesday book... I wanted to post the above as just one example of something which probably shouldn't be described as "scant if any archaeological remains".

The author might have been thinking more of a claim such as the following (i.e. not "no evidence for the invasion" but rather "no remains from the battle"):

Are bodies of 10,000 lost warriors from Battle of Hastings buried in this field?

Ever since the 1066 battle that led to the Norman Conquest, history has recorded the event as happening at what is now Battle Abbey in the East Sussex town. But although some 10,000 men are believed to have been killed in the historic conflict, no human remains or artefects from the battle have ever been found at the location. This has given rise to several historians to examine alternative sites for the battle that was a decisive victory for William the Conqueror and saw the death of King Harold.

Not the answer you're looking for? Browse other questions tagged history archaeology .

29
Were there any Jews among the Nazi top people?
34
Were the Wright Brothers the first to fly?
12
Was George Bernard Shaw a Nazi/Hitler sympathizer?
6
Can the events of the Ramayana and Mahabharata be astronomically dated to around 7300 BCE and 5561 BCE respectively?
6
Have there been any fatalities caused by octopi?
21
Did the ballet/orchestral work 'The Rite of Spring' provoke a riot?
18
Have edible jars of honey been found in thousand-year-old Egyptian tombs?
10
Is there any evidence of individual Jews participating in the Holocaust?