A The Independent of London article, The rise and rise of Sudoku, claimed that:

[...] sales of pencils in Britain are reported to have risen 700 per cent on the back of the Sudoku boom.

A 700% increase seems objectively a disproportionate increase; additionally, that article evokes an unproven correlation between Sudoku and such an increase.

I think I found the person responsible for this quote, saying something very similar a decade later. Faber-Castell is a pencil business based in Germany, owned by a single aristocratic family.

Shades of grey, and other hues, put lead in pencil sales (The Australian)

It all adds up to a pretty picture for Andreas Wilhelm von Faber-Castell, the managing ­director of Asia-Pacific operations for his family company, Faber-Castell. Founded in Germany in 1761, the writing and art supplies business produces more than two billion wooden-cased pencils every year.

The Sydney-based director said sales in Australia had “gone absolutely crazy” — a 600 per cent jump in pencil sales last April — thanks to adult colouring books.

This gives us enough context to solve the mystery: the good Count Faber-Castell is being selective with his sales figures. The 700 percent spike in British sales might have been limited to whatever month the article was written, followed by a slump thereafter. But maybe it wasn't even month-on-month. Maybe they sold 1000 pencils in the UK one week and 8000 the next week, which might be as simple as the combined effect of a sudoku boom with final exams.

As the Wall Street Journal reports, the global year-on-year growth for pencils is fairly linear: 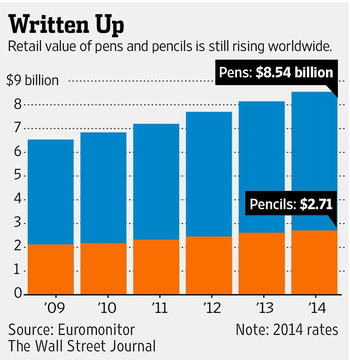 Not the answer you're looking for? Browse other questions tagged commerce games .