Does the Red Cross sell $2.1 billion worth of blood annually? 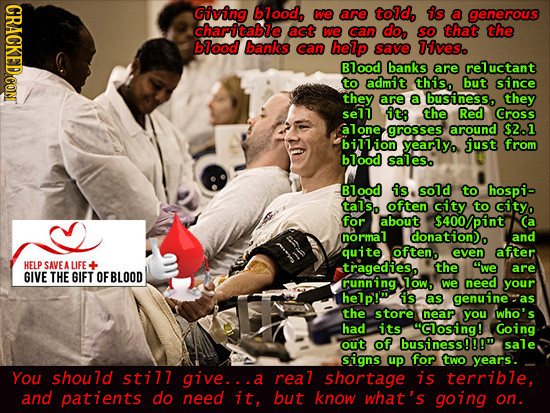 Are there any verifiable sources for this claim that the Red Cross sells such quantities of blood?

I assume this is referring to the American Red Cross, because that is where Cracked.com is based. Note also that describing the Red Cross as "a business" is somewhat misleading. It is a foundation.

Yes. All the centers that supply blood for transfusions—whether they're part of the American Red Cross or not—sell their products to cover operating expenses. Local hospitals work out contracts with regional suppliers or their local Red Cross facility. [...] All blood suppliers are nonprofits, and the prices they charge follow the cost of production.

This is not a secret, or if it is, it is a badly kept one! The American Red Cross finances are published. The 2014 audited financial statements gives a peek into their operations:

It seems the $2.1 billion figure quoted is approximately correct.

Sounds like a lot of revenue, but it is expensive to collect and distribute blood. How expensive? Look at the operating expenses:

Biomedical services cost $1.98 billion in operating costs in 2014. This was not a source of profits in that year.

Like many viral infographics, this one gives one large figure that sounds scary, but nothing to compare it to. The figure is approximately right, but put into context, it is not as disturbing, and paints the American Red Cross in a better light.

Not the answer you're looking for? Browse other questions tagged healthcare blood charities .

25
Does Planned Parenthood sell the organs of late-term fetuses?

52
Does UNICEF use less than 14% of the donated money for the advertised causes?
9
Does food aid cause famines?
17
Does donating blood boost the immune system?
2
Does eating Vitamin C and drinking green tea helps to counteract the effects of secondhand smoke?
67
Has the Red Cross raised half a billion dollars for Haiti to build 6 houses?
13
Is the US FDA policy of deferring blood donations from MSM justified by increased STD risk?
2
Does Lemmy Kilmister from Motörhead have toxic blood?
3
Are most medical studies too badly designed to improve patient care?
17
Does the US have the highest “natural” life expectancy?