Does a human on a bicycle travel more efficiently than any other species?

Steve Jobs claimed on video that a bicycling human is more efficient at locomotion than any other species can manage. He repeated it separately on video, and in writing. The quote is still oft repeated. A poster print run raised 5k USD on Kickstarter.

I think one of the things that really separates us from the higher primates is that we’re tool builders. I read a study that measured the efficiency of locomotion for various species on the planet. The condor used the least amount of energy to move a kilometer. And humans came in with a rather unimpressive showing about a third of the way down the list. It was not too proud of a showing for the crown of creation.

That didn’t look so good. But then, somebody at Scientific American had the insight to test the efficiency of locomotion for a man on a bicycle. And a man on a bicycle completely blew the condor away, completely off the top of the chart. And that’s what a computer is to me. What a computer is to me, is it’s the most remarkable tool that we’ve ever come up with. It’s the equivalent of a bicycle for our minds.

Is a human on a bicycle really overwhelmingly more efficient at moving from place to place than any other species?

The quoted statement says "energy to move a kilometer".

On an "energy to move a kilometer" basis, the statement is definitely false.

Acccording to Dr. Karen Oberhauser, a tagged monarch butterfly has been confirmed to travel 265 miles in one day.

According to How Much Fuel Do Monarchs Burn? reporting Dr. David Gibo's research:

On 140 milligrams of fat a monarch butterfly has enough energy to continuously flap its wing flying for 44 hours and to soar or glide for 1040 hours!

So the butterfly is using at most 3 milligrams per hour.

For comparative human statistics, use this excercise calorie calculator

bicycling 16-20 miles per hour 599 dietary calories (kilocalories) are used per hour. This corresponds to 67 grams (67,000 milligrams) fat per hour.

bicycling at an unspecific "greater than 20 mph" racing speed is 798 calories per hour. This corresponds to 89 grams (89,000 milligrams) fat per hour.

Humans use more than 1000 times as much energy per kilometer as monarch butterflies, even considering the record distance on a bicycle for a day is 521 miles, about twice the butterfly's record.

Note: although the quoted statement clearly says "energy to move a kilometer", and nowhere suggests that mass moved should be considered, another way to consider efficiency is

On this basis, swimming animals have been found to be the most efficient animals. 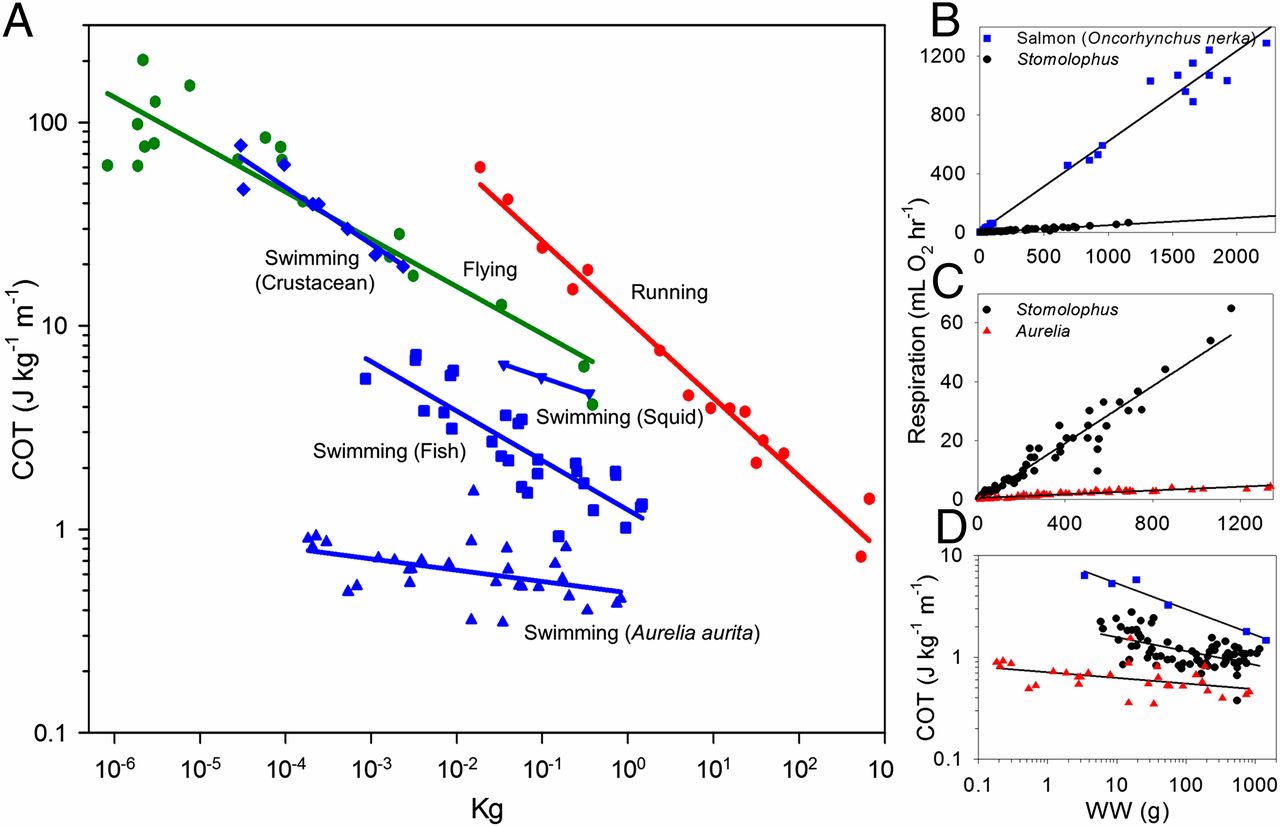 All credit to Brad J. Gemmell, Passive energy recapture in jellyfish contributes to propulsive advantage over other metazoans Proceedings of the National Academy of Sciences of the USA volume 110 pages 17904–17909.

As reported in Eel migration to the Sargasso: remarkably high swimming efficiency and low energy costs, the eel is very efficient.

Particularly, its efficiency is calculated to be 0.5 kilojoules/kilometer/kg.

Let's compare this to a human bicycling.

Eel is more efficient by a factor of 3.

(From the jellyfish article it can also been seen that a species of jellyfish has about the same efficiency of the eel. Large marine animals such as whales do not seem to have been considered.)

See also Swimming speed, respiration rate, and estimated cost of transport in adult killer whales, which shows that at an optimal speed of around 3 meters/second, killer whales have an efficiency of 0.78 kilojoules/kilometer/kg. Better than a human on a bicycle, but not quite as good as an eel.

According to Energy in Nature and Society: General Energetics of Complex Systems by Vaclav Smil, at page 103

See also Comparative analyses of animal-tracking data reveal ecological significance of endothermy in fishes which shows some sharks have efficiency in the 0.1-0.2 J/m kg range.

In conclusion, a human on a bicycle is NOT the most efficient. Whether the quote is analyzed literally on an "energy to move a kilometer" basis, or alternatively as energy per distance per mass of organism, there are more efficient species.

0
Is a human on a bike more efficient than a fish in water?

31
Do we have 10 times more microbes than human cells in our body?
79
Does wearing a bicycle helmet make the cyclist safer?
15
Does riding a bicycle reduce sperm count/male fertility?
18
Are Hummers more environmentally friendly than Prius?
24
Are slick bicycle tires more slippery in the wet?
18
Does drinking coffee, or any other activity, help sober a person?
2
Is DAB+ digital radio more energy efficient than FM radio?