Did Pope Gregory IX call the Holy Fire a fraud?

It is commonly claimed that Pope Gregory IX said the annual Holy Fire miracle in Jerusalem is a fake.

This backed up by the Holy Fire Wikipedia page. Unfortunately, the reference for that claim leads to an article that no longer exists, but we can look it up through a web archive.

The article from The Tablet, "the international Catholic weekly", says:

After Pope Gregory IX denounced the Holy Fire as a fraud and barred Franciscans from having anything to do with it, the Franciscans' Holy Land chronicles became peppered with scathing accounts of the ceremony. A fifteenth-century Franciscan, Fra Francesco Suriano, detailed the unruly emotionalism he witnessed before observing: 'The said fire, however, does not descend in truth (and in the opinion of us friars), although all the nations save us friars feign this falsehood to be true.'

Related Question: Does a miracle of spontaneous "holy fire" occur in a Jerusalem church every year? 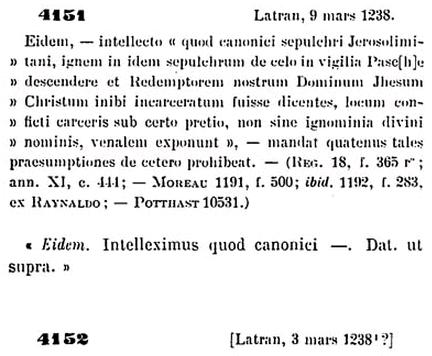 My transcription of that:

My translation of that:

Also -- to the understanding that "because the canons of the sepulchre of Jerusalem, [the fire] [in that sepulchre] [from the sky] [during the vigil of Passover] [to descend] [and] [the saying] [our Redeemer the Lord Jesus Christ] [in it was imprisoned], [a place] [of conflict] [of the prison] [for a fixed price], not without disgrace to the divine name, they expose for sale" -- [either 'the mandate' or 'he requires'] [to that extent] [such presumptions] [henceforth] [he prohibits].

In summary, taking a literal reading of what he wrote, his complaint seems to be not that the fire is a hoax (i.e. a false miracle): but rather it's that the practice involved selling something, which brings ignominy on God's name. It's not solidly clear to me what's being sold, but I think what's being sold is the place i.e. standing-room in the sepulchre for witnesses.

Consider for example this quote from the WIkipedia entry about Gregory IX:

Gregory was a supporter of the mendicant orders which he saw an excellent means for counteracting by voluntary poverty the love of luxury and splendour which was possessing many ecclesiastics. He was a friend of Saint Dominic as well as Clare of Assisi.

Does he call it a fraud or a hoax?

Maybe not: I don't see his saying that. I can only see that he says that what's prohibited are the praesumptiones (or in English "presumptions").

A definition of the post-classical meaning of that word is,

Or this definition which says that by the 5th century the word means "témérité" (i.e. impertinence, audacity, cheek).

That's similar to the second of Google's definitions of the English word,

IMO he doesn't seem to be saying that the belief is wrong, but rather that the behaviour (of selling places) is disrespectful and/or ignominious and therefore should be prohibited.

I think it clearly says that it's prohibited because of the canons' selling.

Claim: In 1238, Pope Gregory IX denounced the Holy Fire as a fraud.

Lets follow claims, starting with Wikipedia. All links can be found at the bottom of the answer. 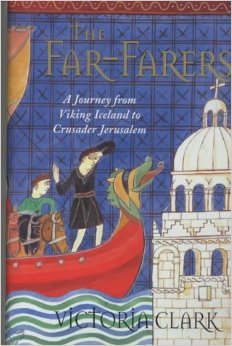 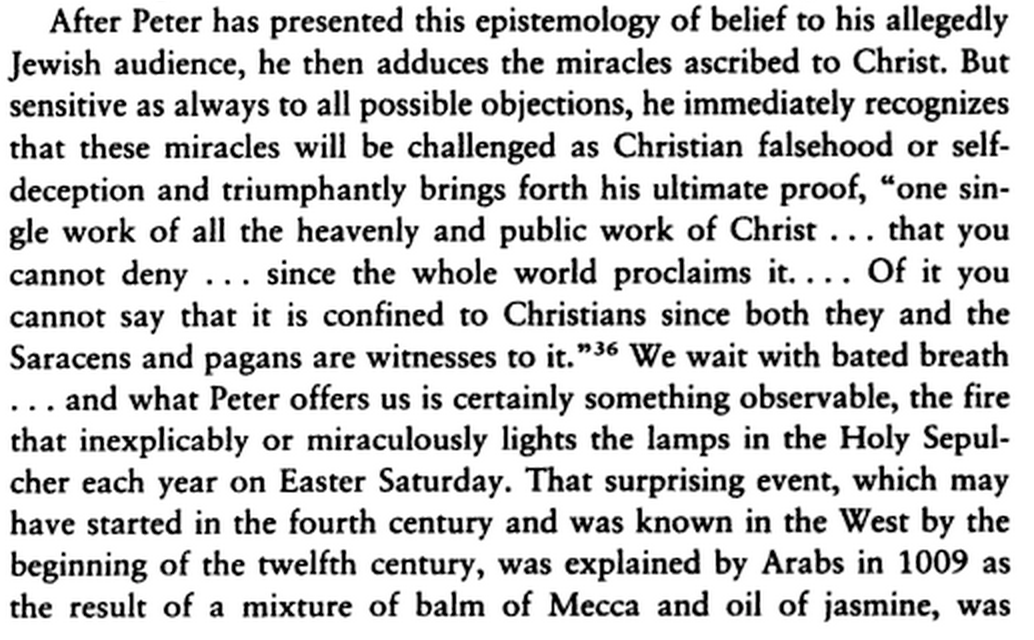 Gavin I. Langmuir's book let me to Nicholas Vincent's book: 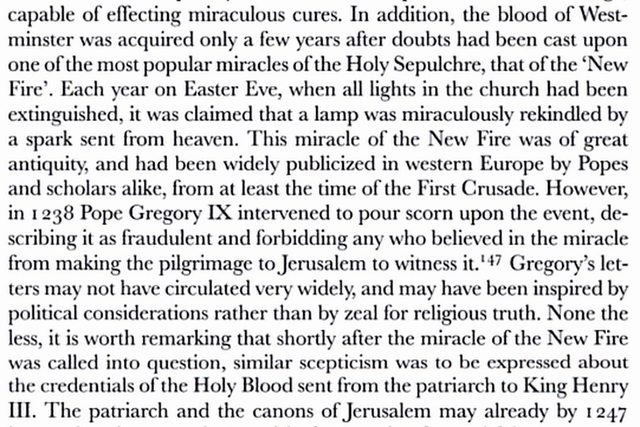 Not the answer you're looking for? Browse other questions tagged religion quotes catholic-church .

21
Does a miracle of spontaneous “holy fire” occur in a Jerusalem church every year?

19
Did Pope John Paul II perform a miracle?
21
Does a miracle of spontaneous “holy fire” occur in a Jerusalem church every year?
31
Did Pope Francis say that women are “unfit for political office”, and merely the “helper of men”?
3
Did Moshe Feiglin call for concentration camps?
37
Did Gandhi call vaccination a barbarous practice?
5
Did Pope Leo X say that Christianity is a fable?
2
Did Herodotus call Egypt the “Gift Of The Nile”?
1
Did Tanya Plibersek call ISIS “not a terrorist organisation”?
56
Did Emmanuel Macron call a teenager an “idiot?”