Two separate people claimed in answers and comments on Do atheists commit far fewer crimes? that atheists have higher income than religious people.

Sklivvz wrote about criminals in the USA:

[..] For example, wealth can give you better lawyers and less chance of landing in jail, and we know for a fact that atheists tend to be wealthier... [..]

(Granted, this specifically mentions wealth, but I'm interpreting it as having a higher "economic ability to fund a defense counsel".)

DVK wrote (and repeated) about the USA:

there's a definite correllation between atheism and higher income.

I in turn contested this idea by linking to Wikipedia's Wealth and Religion page, but I think it would be good to have a proper answer with proper citations.

The graph on Wikipedia, from Religion in a Free Market shows non-religious people just marginally ahead of the the average. 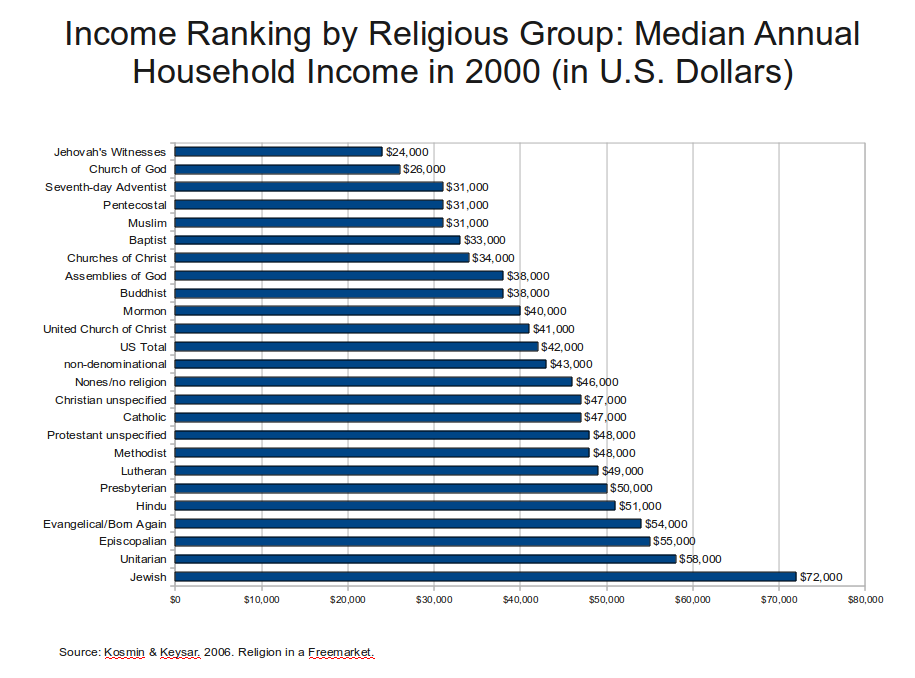 Research into whether atheists and/or non-religious people as a group earn more than religious people is inconclusive per Laurence R. Iannaccone in 1998 since religious data is limited and unreliable. “Economics is fundamentally atheistic. Religious beliefs, practices, and behavior play no role in the life of homo economicus.”

Effects of religion on wealth accumulation

Religion is defined as "any shared set of beliefs, activities, and institutions premised upon faith in supernatural forces".

There are two reasons by which religion and wealth are related.

Family processes such as family size, sibship size are likely to shape adult's wealth accumulation. For example, in explaining the unusually high levels of wealth among Jews in USA, researchers note that in addition to their high educational attainment, their low fertility contributes to wealth accumulation across the generations.

Data in support that religious people are more wealthy: According to a study from 2015, Christians hold the largest amount of wealth (55% of the total world wealth), followed by Muslims (5.8%) , Hindus (3.3%) and Jewish (1.1%). According to the same study it was found that adherents under the classification no religion or other religions hold about 34.8% of the total global wealth.

Effects of intelligence/critical thinking on religion

"An atheist is someone who doesn’t believe in God and/or finds the very concept of God meaningless or incoherent. There are somewhere between 500 million and 750 million non-believers in God worldwide." A meta analysis of 63 studies finds a reliable negative relationship between intelligence and religiosity and analytic thinking can decrease religious belief.

Data in support that no religion/other religion people are wealthy

"Not all countries conform neatly to the correlation between rising secularism and prosperity — Italy and Ireland, for example, are well-off First World countries where religiosity remains high, while China and Vietnam, whose regimes are officially atheist, are poor nations that are also among the most secular".